The United States of America: how things used to be, and are now 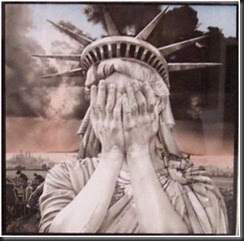 It was on that beautiful morning that out of nowhere, an airliner crashed into the north tower of the World Trade Center in downtown New York at 8:45. What the heck had happened?

Eighteen minutes later, another airliner hit the south tower, and it became clear what was going on: America was under attack. The attack continued, with a third airliner crashing into the
Pentagon in Washington, DC. And a fourth airliner, with an unknown target, had passengers who had become aware of the other attacks, organized and stopped the hijackers, resulting in the plane crashing into an empty field in Pennsylvania, instead of, perhaps, the U.S. Capitol Building or the White House, or some other important target.

In all, these attacks killed 2,996 people in the crashes and their aftermath. It was and is the deadliest day in the nation’s history. And the terrorist attacks triggered major U.S. initiatives to combat terrorism. In that regard, Bush said, “We will make no distinction between the terrorists who committed these acts and those who harbor them.”

The 19 militant Islamic al Qaeda members who hijacked the four airliners had destroyed property and killed nearly 3,000 people, but they also rekindled the American national spirit.

Thus, the attitude of the American people toward the terrorist attacks was voiced, and the will of the people and their ideas of national pride and determination were strengthened.

In annual observances of that fateful day, the names of those lost in the attacks are read, and honor given to all those who died. Many of them died bravely trying to save others trapped in the buildings. Many more died years later from effects of the pollutants from the fires and the collapsed buildings they encountered.

What a difference in spirit we see today, compared to the strong pro-America attitude in the years following 9/11.

There are tens of thousands or millions of younger Americans whose lack of knowledge of their country and its founding principles is astonishing. America’s ideals are unique in the degree of personal freedom and personal opportunity they provide, but many of these people have little or no idea about that.

Cultural decay has been brought on by the breakdown of the two-parent family, the movement away from attending church and Sunday school where we learned the rules for good living, and schools that ceased teaching about our country’s formation and system of government.

Single-parent households have replaced two-parent families in shocking numbers. “For decades, the share of U.S. children living with a single parent has been rising, accompanied by a decline in marriage rates and a rise in births outside of marriage,” according to the Pew Research Center. Its study of 130 countries and territories “shows that the U.S. has the world’s highest rate of children living in single-parent households.”

Children generally do better when they have both a responsible father and a responsible mother to help them grow up to be productive, responsible adults. Children who grow up with an engaged father are less likely to drop out of school or wind up in jail. They are more likely to have high-paying jobs and healthy, stable relationships when they grow up, and tend to have fewer psychological problems throughout their lives.

Lacking a more stable home life and the critical background about their country, many people, children and young adults, are not adequately prepared to fully appreciate our country and carry on the American spirit that was revived following 9/11. Since millions were not yet born, or old enough to appreciate what had happened that day, they were unable to grasp and appreciate the spirit of America that was so strong.

As traditional values are being abandoned — including the idea of marriage and family, the sanctity of life of the unborn, self-reliance and personal responsibility, tolerance for ideas different from their own — many Americans, and not just the younger generations, see the nation’s shortcomings to the exclusion of its positive aspects.

Many see America as an evil nation, and are determined to bring it down. Some indulge in riots, destroying property, assaulting people, and chanting “death to America.”

These riots are not happenstance; there is significant organization and financing behind them. Evidence exists that the funding comes from factions both inside and outside the country that are seeking to weaken it, and turn America into one more failed socialist state.

America definitely faces a serious crisis. And while the nation has seen and dealt with serious crises before and emerged better for the experience, we must ask whether this one will be just one more time of trouble that we survive?  Or will it be the end of America as we know it?