Looking at Trump, Biden and the COVID-19 coronavirus pandemic 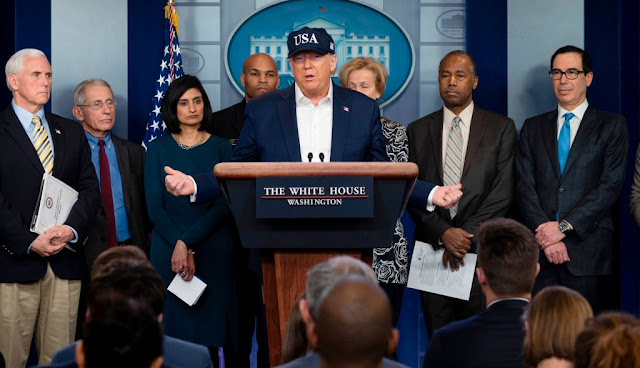 Among the stacks of criticisms of Donald Trump’s presidency is his response to the COVID-19 virus. Trump didn’t do anything, or didn’t act quickly enough, or didn’t do enough, or was just plain wrong, came the complaints.

Lost in the rush of condemnation were some relevant facts:

* The China virus caught the world by surprise.

* Even the much-vaunted health/disease experts made mistakes in recommendations and in reporting relevant data.

Now that Joe Biden has become the Democrat candidate to oppose Trump in the November election, his comments, past and present, are relevant.

Trump formed the Coronavirus Task Force on January 29, less than a month after the first cases were reported by China to the World Health Organization (WHO). Two days later, he announced travel restrictions on China.

From his basement, Biden reacted to the restrictions as “hysterical xenophobia.”

The Centers for Disease Control and Prevention (CDC), an administration agency, began to ship test kits to U.S. and international laboratories on February 6. On February 29, Dr. Anthony Fauci, director of the National Institute of Allergy and Infectious Diseases, advised us that “There is no need to change anything you’re doing on a day-by-day basis. Right now, the risk is still low.”

And all the while House Speaker Nancy Pelosi, D-CA, was in Chinatown, not social distancing, and inviting her constituents to join her there. Soon thereafter, the administration requested $2.5 billion to combat the virus.

Obviously, Trump was no farther behind the curve than Pelosi and Fauci.

In early March, Trump signed a bill to fight the outbreak, totaling $8.3 billion, and he and Vice President Mike Pence met with health insurance officials to secure a commitment to waive co-pays for virus testing. And the following day Trump announced travel restrictions on foreigners who had visited Europe.

* declared a national emergency to access more than $42 billion in existing funding.

Meanwhile, during the March 15 presidential debate, Biden accused the Trump administration of refusing “to get coronavirus testing kits from the World Health Organization (WHO).” However, the WHO had not offered COVID-19 test kits to the United States.

Trump signed the CARES Act into law, and the USNS Mercy arrived in Los Angeles on March 27. And on the 31st, Trump officially announced “30 Days to Slow the Spread.”

Trumps actions dealing with the virus continued. But, so did Biden’s misstatements of fact.

In a comment, Trump noted that the Democrat’s politicization of the virus crisis was a hoax, like the Russia controversy and the impeachment were hoaxes. Not content with an accurate quote, Biden mis-quoted Trump as having said, “Coronavirus, this is their new hoax.” Trump did not call the virus a hoax.

Did Biden deliberately take Trump’s words out of context? Or, did he not understand the difference? Whichever the case, The Washington Post awarded Biden four Pinocchios for his error.

Biden said on ABC’s “This Week” in early March that “They’ve cut the — the Centers for Disease Control. They’ve cut the funding for — they’ve tried to cut the funding for NIH, the National Institute (sic) of Health.” In reality, the CDC’s budget is 7 percent higher than under the Obama administration, and the Obama administration had tried to cut the budget in five of its eight years.

“The Obama-Biden Administration set up the White House National Security Council Directorate for Global Health Security and Biodefense to prepare for future pandemics like COVID-19. Donald Trump eliminated it,” Biden tweeted on March 19. But this, too, was wrong. The Directorate was made part of a new unit, the counterproliferation and biodefense directorate, which strengthened the response to biodefense threats.

On CNN in late March, Biden suggested Trump should send our experts to China to help out. “There was no effort to do that,” he charged. But CDC representatives visited Wuhan on January 8th.

According to Biden, Trump told governors to get their own medical equipment. But he had blundered again. “Respirators, ventilators, all of the equipment — try getting it yourselves,” Trump had said. But Biden neglected the rest of the comment. “[The federal government] will be backing you, but try getting it yourselves. Point of sales, much better, much more direct if you can get it yourself.”

Clearly, Biden’s mangled performance on the virus is not a reason to vote for him.

Now that Trump’s initial actions and Biden’s falsities have been discussed, here is some information on COVID deaths from the CDC that helps clarify the high number of deaths attributed to the disease.

“Deaths are coded [for the virus] when coronavirus disease 2019 or COVID-19 are reported as a cause that contributed to death on the death certificate. These can include laboratory confirmed cases, as well as cases without laboratory confirmation. … COVID-19 is listed as the underlying cause on the death certificate in 94% of deaths.” (emphasis added)

Far fewer people died of just the virus. Death is much more likely when other health problems are present.