Donald Trump’s difficulties began because “He’s not one of us!” 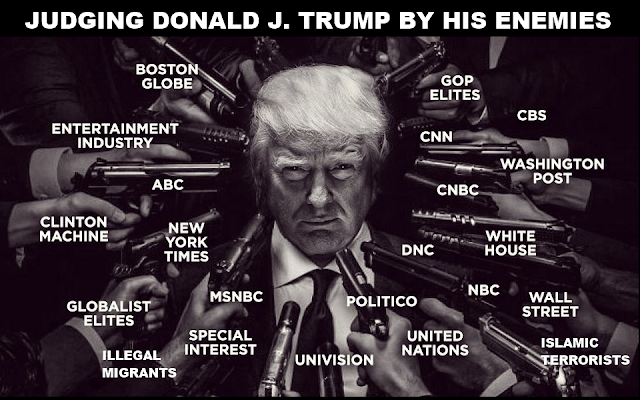 The Washington establishment consists of thousands of Republicans and Democrats who are either working in government or working as Washington lobbyists, lawyers, or in think tanks.

The relevance and impact of this situation was given to me in a conversation several years ago with my Congressman, Morgan Griffith, the excellent Republican Representative of Virginia’s Ninth District. I had brought up the idea that Congressional term limits were needed, and he noted that even with term limits, there would still exist the very influential members of the Washington establishment and those in the bureaucracy.

While elected members of Congress’ tenure in Washington would be limited, the tenure of the establishment and the ensconced bureaucracy would not be affected, he said.

What normally occurs when a president’s term is over and the other party has won the election is that the new president brings in people from the law firms, think tanks and lobbying organizations to fill many administrative positions.

These are people who have functioned in or near the national government before, know the ropes, and can help the new president put together a knowledgeable administration in a relatively short period of time, and some of it before the election.

Some of the out-going administration’s personnel then move to the lobbying organizations, think tanks and law firms, and await their turn to move back into government. Those in the bureaucracy often remain in their positions. Not all of them are able to put aside their own political preferences in order to properly serve their country under a president with different ideas.

The “new guy” — or someday, “new gal” — has a built-in obstacle to conquer, the “bureaucrat mentality” lying quietly beneath the surface: “Presidents come and go, but we are here forever!”

Thus, Trump had a harder task than other presidents who were part of the Washington establishment, or at least had a firm connection to it. He didn’t have a group of close associates who had gained valuable experience and knowledge of how the federal government worked and could be called in — called in again, in many instances — to fill an important slot.

Trump had the Herculean task of forming a government in a short time period using the people he knew and thought competent, but who were from a world away. Many were in business, not politics. Such is the recipe for chaos, and that is exactly what occurred.

The first days of any administration are somewhat wobbly, but because of the “outsider” nature of Trump and the team he was assembling, this one was more so. Add to that the people who already didn’t like Trump in politics, including some Republicans, and the media. They didn’t like an outsider winning the election, especially this particular one. Others had their egos mortally injured by Trump’s combative style. Those factors made things even worse.

These folks oppose everything Trump says and does, without regard to any benefits that result from them. In fact, benefits are often twisted into negatives. And, nearly everything, despite how positive it may otherwise be, has some negatives. Small negatives are often magnified by exaggeration and portrayed as errors. It appears the operational motto is, “oppose Trump at any cost.”

Trump campaigned on a popular theme: “Make America Great Again!” Many don’t think America was ever great, and certainly isn’t great now. Their idea, like that of former President Barack Obama, is to fundamentally transform the United States of America.

Instead of helping the economy produce jobs and giving working Americans more money in their pockets, as Trump did by cutting taxes and harmful regulations, the loyal opposition prefers such expensive boondoggles as the Green New Deal, ending fracking, and Medicare for All.

It also wants to change the way the citizenry will vote in this election by moving away from in-person voting at polling places, under the theory that it is less safe to vote than to shop for groceries. Instead, everyone will be mailing back the ballot they received in the mail.

Mailing ballots works pretty well for Absentee Ballots requested by individual voters, and in states that have an established system for voting-by-mail. Prior to the pandemic, only five states — Colorado, Hawaii, Oregon, Utah and Washington — had a vote-by-mail system in place.

The idea that the other 45 states and the District of Columbia can clean up voter rolls and establish a dependable system is a fairy tale. Some of the problems reside in the Postal Service, but the more serious problems are in state voter rolls, where people who have moved, some to other states, and others who have died are still on the voter rolls. Each one is an opportunity for mischief.

Democrats and Republicans always have different ideas about the country’s needs. This Republican president, even with some successes, has had so much more opposition than the others.