The cancel culture judges America by her mistakes, not her strengths 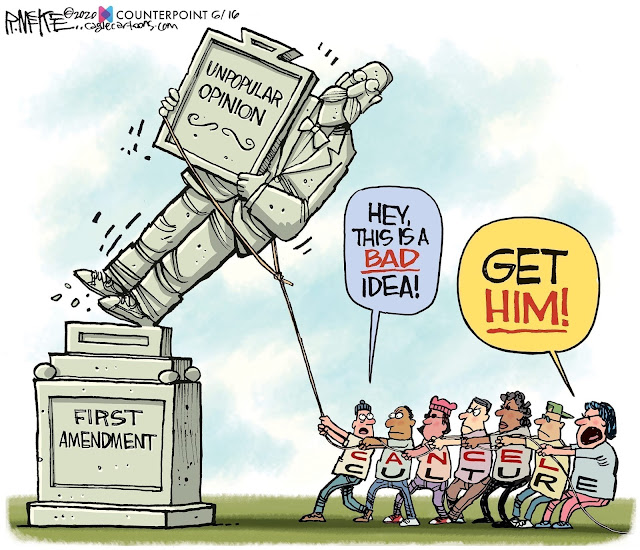 As the nation watches the riots and criminal behavior that evolved from protests over the killing of George Floyd by Minneapolis police, Black Lives Matter (BLM) has turned its attention to removing monuments to personalities from the Civil War that led to the end of slavery in the United States with the ratification of the Thirteenth Amendment to the U.S. Constitution in 1865.

But the mission to take down these monuments was confused from the beginning. It could have been a civil effort to have the “offending” items removed legally by petitioning the appropriate government agencies or property owners on which the statues reside, which is the proper way to do things. The statues could have been moved to museums or other places, if the proper authorities agreed with the petitioners.

But that wasn’t good enough for the cancel culture, which felt that the things must be removed now! And so, rioters — not protesters or demonstrators — turned their criminal behavior to destroying these historical items.

In addition to the monuments to southern Civil War personalities, they also blindly go after some who were on the same side of the slavery case as they are.

The statue of Ulysses S. Grant is one example. Grant was the 18th President of the United States following the Civil War, from 1869 to 1877. But more illustrative of what a magnificent error it was to take down his statue, Grant was the Commanding General of the U.S. Army that defeated the hated Confederates — the targets of BLM — and won the Civil War, leading to emancipation of the slaves.

An even more astonishing mistake is the threatening to take down the Emancipation Memorial. Because this memorial features the likeness of Abraham Lincoln with a black man, Archer Alexander, in chains at his feet, it is regarded by the rioters as a symbol of slavery.

The former slave and now-famous American Frederick Douglass, however, predicted that members of his race “will think of [the Memorial] and speak of it with a sense of manly pride.”

Rather than being a passive, submissive slave, the Memorial was in fact designed to show Alexander at Lincoln’s feet exerting his own strength to break the chains that bound him.

Douglas said, “We have done a good for our race today. In doing honor to the memory of our friend and liberator [Lincoln], we have been doing highest honors to ourselves and those who come after us,” and “we may calmly point to the monument we have this day erected to the memory of Abraham Lincoln.”

And then there is Charlotte Scott, a former slave freed by Lincoln’s Emancipation Proclamation, who said upon hearing of Lincoln’s assassination, “the colored people have lost their best friend on earth! Mr. Lincoln was our best friend, and I will give five dollars of my wages towards erecting a monument to his memory.”

Her contribution sparked a movement among freed slaves to raise money for a memorial to Lincoln which totaled more than $12,000. At that time $12,000, and even $5, was a lot of money.

Female RE-Enactors of Distinction (FREED) is a group of actors that is committed to accurately depict the role of African Americans, including the U.S. Colored Troops and their families during the U.S. Civil War.

Marcia Cole is a member of FREED who portrays Charlotte Scott. Regarding the Memorial, she told Washington, DC TV station WJLA, “I’m here to speak on behalf of the legacy of Charlotte Scott. I understand there’s a big campaign trying to raise money to either take it down or mend it, and I say ‘no’ on behalf of Ms. Charlotte.”

But the rioters don’t know this history.

So, the historical figures and sites that the BLM wants removed will not be decided by the American people and their governments, but by a relative handful of the people, who don’t know history and don’t care about history. They care nothing about what others think and willingly, eagerly, turn to criminality to accomplish their goal.

That isn’t the American way. But America and her ways are a foreign language to most of these folks. They judge America by her mistakes only, ignoring her strengths. They apply his same myopia to Civil War figures. They see only a part of the lives of the individuals that they target. That small part is all that matters to them.

That sentiment was fairly clearly stated by Hawk Newsome, president of the Greater New York Black Lives Matter. “If this country doesn’t give us what we want, then we will burn down this system and replace it,” Newsome said in an interview on Fox News’ “The Story” with Martha MacCallum.

And so, what we really have is not merely a crusade by a relatively small group to cleanse the land and remove elements they dislike and that stain our history, it is to wreak havoc and impose their will on the rest of us.

In the wise words of Marcus Aurelius: “How much more grievous are the consequences of anger than the causes of it.”