George Orwell’s vision is coming true, but his timing was off 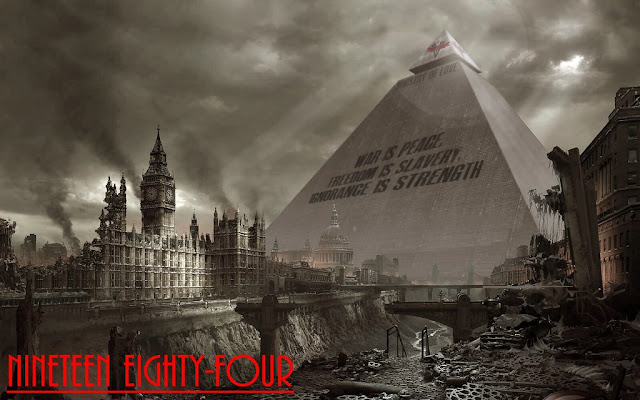 In 1946, author George Orwell, fighting tuberculosis, isolated himself on the Scottish island of Jura to write his last book, “Nineteen Eighty-Four: A Novel.” The story describes a totalitarian state where the government — “Big Brother” — created the language — “Newspeak” — to control the thoughts of its citizens.

Published 71 years ago, and having gained great fame, Orwell gave us concepts like “Big Brother,” “doublethink,” “thoughtcrime,” “Newspeak,” “2+2=5,” and “memory hole.” Some of those concepts are relevant today, both in Orwell’s fictional account, and in reality.

Now, 36 years after 1984, Orwell’s dystopian society — a society in which individual freedoms suffer under government edicts and other forms of control — is forming in the United States.

It is becoming easier and easier to find evidence of the creeping impact of Big Brother-like control. Many instances go unreported, and are even unknown beyond the local area where they occur. Some, however, are reported for all to see.

The president of a libertarian think tank in Colorado, Jon Caldara, who also was the most-read opinion columnist of The Denver Post, lost his job with The Post because of a comment in a recent column. What could he have written that would deserve such strong action? “[T]here are only two sexes, identified by an XX or XY chromosome,” he wrote. “That is the very definition of binary.”

This comment is absolutely consistent with biologic science, but is a no-no in much of today’s America. You see, it does not conform to the politically correct “Newspeak” imposed on us by a relatively tiny minority of people, even though it is the scientifically correct position.

In 2018 a French teacher at West Point High School in West Point, Virginia was fired by the local school board after a four-hour hearing, an hour of which was a closed session, in a 5-0 vote. Why was Peter Vlaming fired?

Because he resisted administration orders to refer to a ninth-grade female student with male pronouns. The girl had undergone a gender transition, and insisted she be treated as a male. Vlaming resisted because it put him in conflict with his religious beliefs. He suggested to the student that he would instead use a first or last name, but that wasn’t good enough for the student. Or, apparently, the school board.

So, a teacher’s First Amendment right to freedom of religion takes a back seat to a female ninth-grader’s desire to change genders and be identified by everyone as a male. “Thoughtcrimes” are real and being punished.

This case is thought to be the first in Virginia. It likely will not be the last.

Today, on some college campuses, where the intersection of competing ideas was once a strong and valued concept, conservative speakers are shouted down or prevented from opportunities to speak, and this occurs with the unquestioned support of the school administrations.

Professors are urged, or ordered, to give prior “trigger warnings” when a topic that may upset students is scheduled. Some schools have mandated that some types of speech are restricted to “free speech zones,” so that students will not accidentally stumble on information that is at odds with their beliefs, which may upset them, or make them think. Students now have “safe zones” where they may hide from ideas differing from their own.

A fascist group called “Antifa” (short for “anti-fascist”) indulges in violence, and crosses the line of Constitutionally protected peaceful protests in public places. Members attack police, throwing eggs, bottles and other things at them. Yet the police often retreat, rather than arresting and jailing the law-breakers, and doing so forcefully if necessary. This is partly due to the generally false narrative that police frequently indulge in unnecessary violence, so they play it safe, and back off.

And Virginia’s government is now under control of the liberal/progressive elite from the DC-Richmond corridor, and the Democrat-led government has set about turning the state into California-East, despite the strong objections of a substantial portion of state residents.

This dystopian direction America is now traveling is fueled by liberal/progressive thinking, not the national government. Many people, both in and out of government, however, prefer majority rule — a strict democracy — which can be more easily turned against the people than the republican system our Founders developed.

John Adams reminded us: "Remember, democracy never lasts long. It soon wastes, exhausts, and murders itself. There was never a democracy yet that did not commit suicide."

John Marshall, the highly respected fourth chief justice of the U.S. Supreme Court observed, "Between a balanced republic and a democracy, the difference is like that between order and chaos."

Thomas Paine said, "A Democracy is the vilest form of Government there is."

The brilliant columnist Walter Williams notes that “We would no longer be a government ‘of the people.’ Instead, our government would be put in power by and accountable to the leaders and citizens of a few highly populated states. It would be the kind of tyranny the framers feared.”

But this faction doesn’t understand the reasons our nation was created as it was; a large number of Americans have no idea how much damage their desires will impose on their country.
Posted by James Shott at 2/12/2020 09:38:00 AM