Is it desperation that pushes the left to promote such crazy ideas? 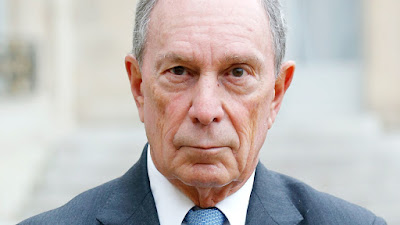 Democrat Michael Bloomberg, the former mayor of New York City and one of a dozen candidates for the Democrat nomination for president, offered his thoughts following the West Freeway Church shooting in Texas recently.

“It’s the job of law enforcement to have guns and to decide when to shoot. You just do not want the average citizen carrying a gun in a crowded place.” Bloomberg said.

You could fill several large sports venues with what Bloomberg doesn't know. But as ignorant as he appears to be on this issue, you might expect him to understand that because several non-law enforcement persons had weapons at the Texas church that Sunday, rather than perhaps dozens of parishioners being killed or injured, the murderer only killed one parishioner and injured another one.

Can things go wrong in situations such as this one? Of course. But two things must not be forgotten: First, there aren't enough law enforcement officers to provide protection in every place where groups gather, and it takes valuable minutes for them to respond to calls, and second, as demonstrated by the armed parishioners of West Freeway Church, there are many law-abiding citizens who are trained and skilled enough to effectively act to end a shooting, saving many lives.

As President Donald Trump indicated in a tweet following the incident, “It was over in 6 seconds thanks to the brave parishioners who acted to protect 242 fellow worshippers,” “Lives were saved by these heroes, and Texas laws allowing them to carry guns!” 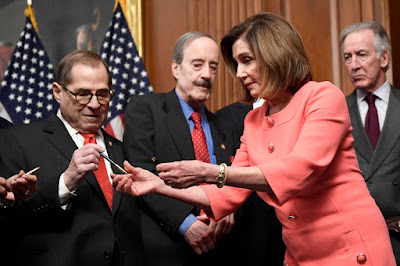 On the day the impeachment process got under way in the House of Representatives, Speaker Nancy Pelosi, D-Calif., dressed in black for the occasion, and declared, “I solemnly and sadly open the debate on the impeachment of the President of the United States.”

The House then rushed through its phase of the impeachment process, where the case against the president is to be built through testimony of witnesses with knowledge of the wrongs under investigation. The House was in such a hurry to save the country from Donald Trump that they couldn’t spare the time to have the third arm of the federal government — the judiciary — to resolve the stand-off blocking some witnesses the Democrat majority wanted to call.

Pelosi, curiously, then put the two Articles of Impeachment the House felt rushed to create in a drawer for a couple of weeks. The House finally voted last week to transmit the Articles to the Senate where the second phase — the trial — is to take place, based upon the case developed by the House during the initial phase.

Prior to delivering the Articles to the Senate, Pelosi passed out commemorative pens made specifically to celebrate the solemn occasion that she had previously described. They completed the ceremony by singing, “We’ve Been Working On A Railroad.”

Then the group sang “We Love A Parade” as they walked across the Capital building to the Senate chamber. 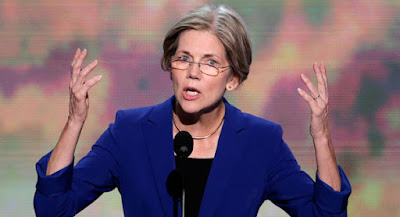 Democrat hopefuls seem to take it as a challenge to see which of them can develop the craziest idea. Wild ideas that are both unworkable and ridiculously expensive, like the Green New Deal and Medicare for All, both of which have the added element of increasing the federal government’s control over our lives, now have a new partner.

At last Wednesday’s town hall, Sen. Elizabeth Warren, D-Mass., unveiled another grandiose plan to decarbonize the U.S. She said that her administration will decree that any new buildings built from 2028 onwards must be carbon neutral.

Appearing on MSNBC's Morning Joe, she declared, “What scares me is every time you go back to the scientists, they tell you two things. It's worse than we thought and we have less time. That means we've got to be willing to do things, for example, like regulation. By 2028, no new buildings, no new houses, without a zero-carbon footprint."

Back in September she described her plan to stop using fossil fuels to produce electricity.

Warren added, “In my administration, we’re not going to build any new nuclear power plants, and we are going to start weaning ourselves off nuclear energy and replacing it with renewable fuels. We’re going to get it all done by 2035, but I hope we’re getting it done faster than that. That’s the plan.”

The Energy Department’s Energy Information Administration (EIA) tells us that in June 2019, energy plants around the country produced a total of 352 million megawatt-hours of electricity, as follows:  Natural gas-powered plants accounted for 39% of it, coal 22%, nuclear 20%.

If current trends continue, the EIA projects that by 2035 renewables will generate only 24 percent of electric power, and by 2050 only 29 percent.

Obviously, Nasty Nancy was awaiting arrival of those pens.

Seriously, do a lot of your countrymen believe this stuff?

Mind you over here our sheep count is so high due to the inclusion of people who will believe everything they are told.

Yes. What's a solemn and sad occasion without celebratory memorabilia?

We have a substantially high population of sheeples, too.

Good to hear from you, Steve.

I miss the old days when blogs were more popular.