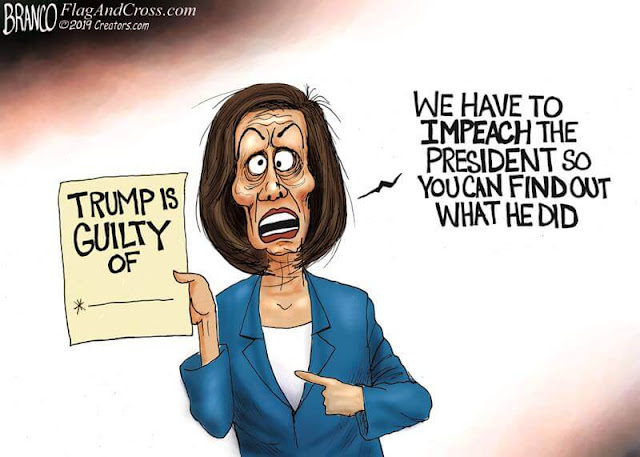 Democrats have wanted to impeach President Donald Trump for a long time. Here is some background on the process.


Impeachment allows Congress to remove the President, Vice President or any civil officer of the United States. This is the fourth attempted impeachment of a president in our history.

The Constitution says the House of Representatives may begin impeachment proceedings when it believes some official has committed treason, bribery, or a high crime or misdemeanor. Treason and bribery are well defined. However, high crimes and misdemeanors are not well defined.


After investigation the House may vote to impeach. If the measure passes, the U.S. Senate holds a trial, and if it convicts the accused, he or she is removed from office and may not hold any such U.S. office in the future. If the Senate does not convict, the impeached official remains in office.


In reality, the House can impeach an official merely by voting to do so, whether or not an impeachable offense has been proved, or even identified. All that is important is whether the vote to impeach passes. Such a situation, however, is not what the Constitution intends.


Enemies of Donald Trump began calling for his impeachment immediately after he won the 2016 presidential election and before he had even taken the oath of office. Investigations of him and his campaign began in July 2016, when the FBI began investigating Russia’s attempt to influence the 2016 presidential election, including whether Trump’s campaign was involved in those efforts.


Investigations of one sort or another have been going on ever since. The House Judiciary Committee chaired by Rep. Jerry Nadler, D-N.Y., is now holding hearings on impeachment, following the highly partisan, one-sided episodes in the House Intelligence Committee, chaired by Rep. Adam Schiff, D-Calif.


Conventional wisdom holds that the House Democrat majority will vote to impeach Trump, but that the Republican controlled Senate will not vote to convict. This means Trump will remain in office, and will run for, and quite possibly win, reelection.


Of the many Trump offenses, real and imagined, the one currently being pursued involves a phone call to Ukrainian President Zelensky.


During the call, the official transcript shows Trump asking for help in investigating the election irregularities: “I would like you to do us a favor, though, because our country has been through a lot, and Ukraine knows a lot about it. I would like you to find out what happened with this whole situation with Ukraine …”


And later, he asks for assistance with potential corruption on the part of former Vice President, Joe Biden. “The other thing, there’s a lot of talk about Biden’s son, that Biden stopped the prosecution and a lot of people want to find out about that, so whatever you can do with the Attorney General would be great. Biden went around bragging that he stopped the prosecution, so if you can look into it … It sounds horrible to me.”


Congressionally approved financial aid was put on hold prior to the phone call. Democrats think this indicates a “quid pro quo,” a “this for that” arrangement between Trump and Zelensky.


After the term “quid pro quo” failed to get adequate public interest, the charge was changed to bribery. However, in either case, Zelensky would have to be aware that the aid was on hold pending his assistance. For one to be bribed, one must know what the other party wants, and what it will pay for it.


Zelenskyy has at least twice said he was not aware of the aid being put on hold until long after the phone call. Further, the aid was provided, and the investigation of Biden was never done. Zelensky has also denied being pressured to do anything.


During the hearings, witnesses, many of whom had impressive credentials, testified. Like the infamous whistleblower, most were not on the call. Their testimony consisted of what someone told them about the call, or what they imagined had occurred. Two witnesses who were on the call essentially said they didn’t like the content, or were uncomfortable with it.

House Democrats want you to believe that Trump’s behavior as president is impeachable.

However, a look a history shows that to be a gross exaggeration.


Examples of actual bad behavior include:


* Andrew Jackson ignored courts and laws and used his power to ethnically cleanse lands that he also sometimes happened to have a financial interest in.


* Lyndon Johnson asked the FBI and CIA to spy on the Goldwater campaign in 1964, and lied about the Gulf of Tonkin, escalating the Vietnam War.


None of these presidents faced impeachment.


Lifelong liberal Democrat, Constitutional lawyer and civil libertarian Alan Dershowitz said the following: “There is no case for bribery based on — even if all the allegations against the president were to be proved, which they haven’t been — but even if they were to be proved, it would not constitute the impeachable offense of bribery.”