Activities in “The Swamp” reach disgusting and treasonous levels 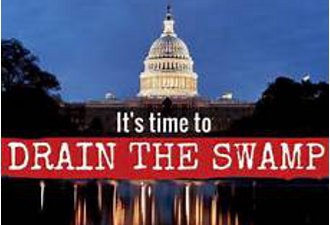 “The Swamp.” That is how Donald Trump identifies the Washington bureaucratic morass. The Swamp, or however one identifies it, is the stuff of legend.

It has a life and a mind of its own, with bureaucrats who have made a career of federal employment sometimes indulging in activities other than serving the needs of the citizenry, which is their duty.

Sometimes that extraneous work involves merely not doing what should be done, and sometimes it involves doing what should not be done. Not every federal employee has the integrity, honesty and the devotion to duty that is expected of those serving the American people.

The misbehavior may be merely shirking one’s duty, such as sloppy work habits, or doing things other than what the job entails. Or it may be using the powers of the IRS improperly against certain types of organizations, as we saw with Lois Learner at the helm of the department responsible for granting non-profit status that purposefully denied approval or delayed action on legitimate applications of conservative organizations.

Or it may be a coordinated effort to affect the outcome of a presidential election, and following that failure, trying to sabotage that darned business guy outsider who beat the odds and won despite The Swamp’s substantial meddling.

That is what was long suspected, but was well covered up by Swamp-creatures, and ignored by the liberal media, but is now emerging for all to see. In contrast to the left’s preferred narrative, Donald Trump’s allegations of “spying” and “wire-tapping” have been proven correct, with the evidence of our government listening in on the calls of a Trump associate who lived in Trump Tower in 2016, and other things of a similar nature.

Let’s shift our attention to London, weeks before the election, when Trump campaign advisor George Papadopoulos sat with a comely young lady going by the name of Azra Turk in a bar. Using her womanly wiles to best advantage for a while, she then asked Papadopoulos if the campaign was working with Russia.

The New York Times, no supporter of Donald Trump, reported last week, “The woman had set up the meeting to discuss foreign policy issues. But she was actually a government investigator posing as a research assistant, according to people familiar with the operation. The F.B.I. sent her to London as part of the counterintelligence inquiry opened that summer to better understand the Trump campaign’s links to Russia.”

“The decision to use Ms. Turk in the operation aimed at a presidential campaign official shows the level of alarm inside the F.B.I.,” The Times story continued, “during a frantic period when the bureau was trying to determine the scope of Russia’s attempts to disrupt the 2016 election, but could also give ammunition to Mr. Trump and his allies for their spying claims.”

The question that jumps immediately out is, was the “level of alarm inside the F.B.I.” a legitimate criminal or counterintelligence concern, or was it just politics? Where was the concern about Russian involvement in Hillary Clinton’s campaign?

We know the Russians meddled in the election, but years and millions of dollars of investigations produced no evidence of Trump/Russian campaign involvement. Russian meddling appears to have been a convenient excuse for FBI and Department of Justice meddling in the Trump campaign.

Further evidence of government malfeasance involves the email correspondence by high officials at the FBI clearly leading to the belief that political considerations were, indeed, the motivation.

FBI Agent Peter Strozk and his mistress, FBI lawyer Lisa Page, exchanged a series of emails that had nothing to do with legitimate agency business, but were focused on their dislike for Donald Trump, and efforts to stop him from winning the election. Then-FBI Deputy Director Andrew McCabe and then-FBI Director James Comey are other names associated with the monkeyshines of the FBI.

The questionable Carter Steele dossier, financed indirectly by the Clinton campaign, and used to trick the FISA Court into issuing warrants to spy on various elements and persons associated with the Trump campaign, is a major element in this sordid story.

The FBI agents, who signed off on and presented the dossier to the FISA Court as a legitimate document supporting the permissions they were seeking, knew the dossier was, at best, questionable, and at worst, fraudulent. Nevertheless, it successfully won warrants that were used against American citizens.

The United States is often referred to as “a nation of laws,” and for the most part that is true. But there is another comment that is not so positive, that also applies: laws are not applied evenly; we have a two-tiered system, where people in positions of power often escape accountability that the rest of us are held to.

Donald Trump did not benefit from that second tier, but so far Hillary Clinton has.

While Congressional Democrats are busy cooking up new investigations of Trump, members of his family and his administration, looking for “anything,” Congressional Republicans are preparing to investigate the investigators.

They will work to get to the bottom of the now well-known malfeasance that took place in the upper echelons of the FBI, DOJ and in FISA Court proceedings.
Posted by James Shott at 5/08/2019 10:01:00 AM