A Constitutional crisis? Another Democrat talking point gets life 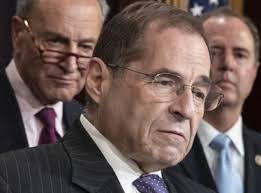 So, Rep. Jerrold Nadler, D-N.Y., Chair of the House Judiciary Committee thinks we have entered into a Constitutional crisis because Attorney General William Barr has refused to turn over a completely un-redacted copy of Special Counsel Bob Mueller’s report.

Barr has, however, provided a copy for key members of Congress that is almost un-redacted. Out of the well-over 400 pages in the report only two entire lines of text are redacted, and seven lines are partially redacted. This version of the report is far better than the heavily redacted version previously made available, but only three members of Congress have chosen to review it, and – surprise, surprise, surprise – none of the three is a Democrat.

And, the redactions that remain are still in place because of a federal circuit court ruling to the effect that grand jury materials cannot be made public. The reason is that making public grand jury testimony about people who were investigated but not indicted would potentially unfairly harm those whose names appeared, even though they were not indicted for any criminal wrongdoing.

But that’s not a good enough reason for Nadler and his Democrat comrades.

It appears, therefore, that if there is unconstitutional behavior, it is the behavior of Nadler himself, who is attempting to punish the AG for refusing to break the law just to help Nadler and the Democrats create another smoke screen. He led the Judiciary Committee in holding Barr in contempt of Congress, although the entire body of the House has not yet voted to do so.

The following explanation appeared in National Review last month. “At issue was this question: Does a federal court have the authority to order disclosure of grand-jury materials if the judge decides that the interests of justice warrant doing so; or is the judge limited to the exceptions to grand-jury secrecy that are spelled out in Rule 6(e) of the Federal Rules of Criminal Procedure? The D.C. Circuit’s McKeever ruling holds that the text of Rule 6(e) controls. Consequently, judges have no authority to authorize disclosure outside the rule.” And if a judge may not do so, obviously the AG may not.

Surely Nadler, who is rumored to be a lawyer and is chair of the Judiciary Committee, knows that Barr cannot release a clean report. And wouldn’t he, and several more of his Democrat fellow travelers, benefit from the lightly redacted version that Barr provided. One would certainly think so.

All of these shenanigans are a strong indication that this entire episode is just more political swampiness by a desperate Democrat faction in Congress.

After all, Barr said in testimony before the Committee that he intends to look into several of the irregularities by the FBI and DOJ, and if Nadler himself is not at risk, quite a few public servants who share the anti-Trump obsession surely are.

Law professor Jonathan Turley, described by Townhall.com as “left-leaning,” has a reputation for ignoring political considerations when addressing constitutional issues.

About the topic of Barr’s refusal to respond to the subpoena, Turley said, “The problem is that the contempt action against Barr is long on action and short on contempt. Indeed, with a superficial charge, the House could seriously undermine its credibility in the ongoing conflicts with the White House.”

He went on to say, “As someone who has represented the House of Representatives, my concern is that this one violates a legal version of the Hippocratic oath to ‘first do no harm.’ This could do great harm, not to Barr, but to the House. It is the weakest possible case to bring against the administration, and likely to be an example of a bad case making bad law for the House ... Barr promised to release as much of the report as possible, and he has delivered.”

Nadler and his fellow OCD-plagued anti-Trumpers are uninterested in what destruction they may impose on the country in their frenzied efforts to harm Donald Trump.

“The end justifies the means” is the current ruling motto of Democrats, and some misguided Republicans. “Trump must be defeated, removed from office, even prosecuted” seems to be the operative theme. It doesn’t matter whose life is unfairly ruined, or how many people they trash in the process.

Being morally upstanding and behaving with integrity are lost virtues among Congressional Democrats, as they climb lower and lower in their efforts to remove Trump from office.

While the Constitutional Convention of 1787 was going on in strict secrecy, at the end of the proceedings a Mrs. Powel of Philadelphia asked Benjamin Franklin, "Well, Doctor, what have we got, a republic or a monarchy?" Franklin responded immediately, "A republic, if you can keep it."

We must give Congressional Democrats their due for being transparent: They are clearly showing, for all to see, that they care little for the law or for honorable behavior. Nothing is as important than doing in Donald Trump, and it seems nothing will be allowed to stand in their way. And the republic that Franklin celebrated and warned about is under attack from within.