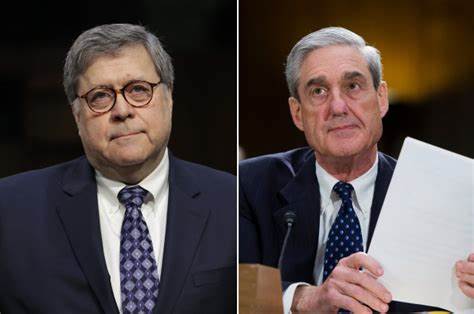 Attorney General William Barr testified recently before the House Appropriations Committee’s Commerce, Justice, Science, and Related Agencies Subcommittee. The purpose of the hearing was to discuss the Department of Justice budgetary request, but he was asked question after question after question about Special Counsel Robert Mueller’s report on the Russian collusion investigation, and the conclusions from  that report Barr released.

For doing his job as AG, Barr suddenly became the new Democrat target, as his conclusions from the Mueller report failed to satisfy the intense hunger of Democrats for evidence of impropriety, even criminality, by then-candidate Donald Trump and his team.

The sudden, virtually automatic and universal distrust of Barr by Congressional Democrats and the MSM for doing his duty in accepting the Mueller report and releasing the conclusions is more than just curious.

Years ago, a Democrat-controlled Senate confirmed Barr by voice vote for attorney general under President George H.W. Bush. He was highly praised, both by Republicans and Democrats, the Senate Judiciary Committee voted unanimously to recommend his confirmation, and then-Senate Judiciary Chairman, former Vice President, and now potential presidential candidate Joe Biden, and Democrat Sen. Patrick Leahy both enthusiastically endorsed him for the position.

But now that political considerations have replaced obligations to duty, that support has vanished in a flash of desperate partisanship.

This same response occurred when Robert Mueller was named special counsel. Praise came abundantly from both sides of the political aisle, and Democrats could hardly contain their eagerness at the expected results of the investigation by this giant of a man, imagining a handcuffed Donald Trump being perp-walked out of the White House to the hoosegow along with Don, Jr., Eric, Ivanka, and yes, Melania and Barron, too.

But that was not what happened, and suddenly Mueller’s reputation lay in shambles in the gutters of Pennsylvania Avenue. Now there are two once-widely respected people associated with the Department of Justice who, by doing their jobs, lost the confidence and respect of Congressional Democrats.

When Barr’s appearance before the Subcommittee began, New York’s Rep. Nita Lowey, Chair of the House Appropriations Committee, got things off to a creaky start: “Before getting into your budget request I want to discuss a serious oversight matter, your unacceptable handling of Special Counsel Robert Mueller’s report.”

“It’s been reported that the report is 300 to 400 pages, and I use the term ‘reported’ because we have no idea how long it actually is,” she continued. “All we have is your four-page summary, which seems to cherry pick from the report to draw the most favorable conclusion possible for the president.”

And how would she know whether he is cherry picking or not, since she complained about having no knowledge of what is in the report?

Her deep ignorance of the situation shone forth again when she said, “I must say it is extraordinary to evaluate hundreds of pages of evidence, legal documents, and findings based on a 22-month-long inquiry, and make definitive legal conclusions in less than 48 hours.”

Again, she makes assumptions without having seen the document, which might have contained conclusions. And she also didn’t know that Deputy AG Rod Rosenstein, to whom Mueller reported during the investigation, helped Barr produce the document that contained the findings.

And then there was this brilliant question from Michigan Congresswoman Brenda Lawrence: “Who do you report to, the President of the United States or to the people of America?”

After such great mischaracterizations of the Barr “summary,” the DOJ offered some perspective on it: "Given the extraordinary public interest in the matter, the Attorney General decided to release the report's bottom-line findings and his conclusions immediately — without attempting to summarize the report — with the understanding that the report itself would be released after the redaction process.”

Barr also aroused the ire of Committee Democrats, and others, when he said he believed there was “spying” during the presidential campaign.  By using the term “spying,” rather than their much-preferred and less-severe term, “surveillance,” he upset a lot of people.

Spying by any other name, like “surveillance,” is still spying. Which term is the correct one for listening to (intercepting) private conversations, and other such activities: Spying, eavesdropping, or the Democrats’ preferred term, surveillance?

Do you refer to your cousin as a relative, as family, or as kinfolk? Does it really matter? Isn’t this really just playing rhetorical games?

Whatever term one carefully chooses for describing the deed, spying is spying. AG Barr said the difference between legal spying and illegal spying occurs when there is a legitimate predicate for the deed. If there is one, fine; the spying is legal. If not, the spying is a crime.

After being questioned about believing spying occurred, Barr said that he wants to know whether the spying was done appropriately, or not, and plans to look into the matter to find if a suitable predicate existed to justify it.

No doubt this has not eased the Democrats’ disgust over Barr’s findings, and likely has caused a spike on their nervous meter, as the possibility of subversive shenanigans in the Obama FBI, DOJ and elsewhere being exposed looms large.
Posted by James Shott at 4/16/2019 09:48:00 PM

Was there ever any doubt he would? Anyone that opposes the Dims and doesn't *toe the mark* is on the list...

Nothing stands between the Dems and hypocrisy.