We have to stop deficit spending and lower the national debt 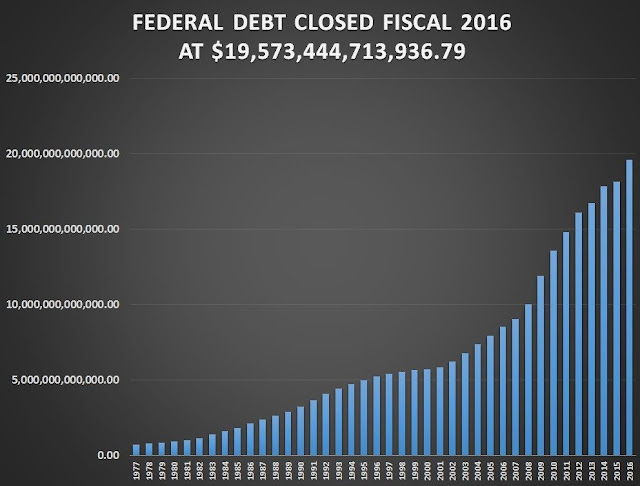 The national debt virtually doubled in the 8 years of President Barack Obama. From the $10.6 trillion debt when he took office in 2009 that was created by all the presidents before him, until the end of his terms in 2017, the debt grew to nearly $20 trillion. That was, of course, the largest increase under any president in history.

President Donald Trump claimed that in his first month in office he actually saved money, reducing the national debt by $12 billion. That is true, but is a mere pittance compared to the $20 trillion total. It was a baby step in the right direction, but it was also only a moment in time for a number that rises and falls month-to-month.

Campaigning in 2016, Trump promised voters he would balance the budget. His first budget does not accomplish that difficult task, and in fact, the budget for fiscal year 2019 is projected to add another trillion to the existing debt, contrary to his promise to voters.

Trump’s proposed spending plan is a $4.4 trillion monster for fiscal year 2019 that some describe as dangerously unbalanced. He still has some time to balance the budget, but what a great thing it would be if his first budget actually moved decidedly in that direction.

Everyone who manages a business or organization, or a home budget understands the situation: ideally, income exceeds expense. Historically, the federal government achieves surpluses only rarely, and a properly operated government shouldn’t produce large surpluses, or large deficits.

Our gargantuan national debt is the result of gross budgetary malfeasance, and it is at crisis proportions. The nation’s debt now exceeds its GDP, and net interest payments on the debt are estimated to be 6.8 percent of all federal outlays at $276.2 billion this fiscal year. That is enough to pay for all administrative office employees for this year.

A comparison of what the government is doing with what it is allowed to do by the U.S. Constitution needs to happen.

The Preamble to the Constitution lays out its purpose, in broad terms: “We the People of the United States, in Order to form a more perfect Union, establish Justice, insure domestic Tranquility, provide for the common defense, promote the general Welfare, and secure the Blessings of Liberty to ourselves and our Posterity, do ordain and establish this Constitution for the United States of America.”

James Madison, one of the Constitution’s creators, certainly can be cited as an expert on the document. “The powers delegated by the proposed Constitution to the federal government are few and defined,” he wrote in Federalist No. 45, in 1788. “Those which are to remain in the State governments are numerous and indefinite.”

But in direct opposition to this founding principle, phrases such as “promote the general Welfare,” have been expanded well beyond what the Founders intended, and contribute greatly to a government that has grown in size, control and cost beyond all reason.

The federal government has its nose and fingers in far too many areas of our lives. It should not regulate mud puddles or control education. It should not use its power against some legal businesses or organizations to the benefit of others. The federal government owns and controls 640 million acres of America’s land, about 28 percent of its total surface, the majority of it in western states. The list goes on.

Given the degree to which these improper activities have grown and are so much a part of life, it may not be possible to completely eliminate them, but there are certainly areas ripe for reduction.

As designed, the federal government should not require much money from citizens to operate, and the tax cuts that finally made it through Congress have been a boon to taxpayers and businesses. Businesses can expand, replace equipment, hire new workers and/or increase wages, and taxpayers will have more of their earnings at their disposal to buy things they need and want, which will increase spending in the private sector and increase tax collections.

And government positions left unfilled by the administration will provide some reduction in government spending. But even under the best of circumstances, these factors will not make a large dent in the deficit.

According to downsizinggovernment.org, “The federal government employs 2.1 million civilian workers in hundreds of agencies at offices across the nation. The federal workforce imposes a substantial burden on America’s taxpayers. In 2017 wages and benefits for executive branch civilian workers cost $276 billion.” And that does not count the courts, the Congress or postal workers.

Getting federal spending down to the balanced budget level requires drastic cuts in government, and will require closing some unnecessary administrative agencies, and reducing the number of federal workers in the remaining agencies. As Madison reminds us, the powers delegated to the federal government are few and defined, and the rest of the things needed are to remain the responsibility of the state governments.

One of Trump’s favored phrases in the campaign was “draining the swamp.” Getting government under control and reduced to its proper size and function has never been more important than it is today.
Posted by James Shott at 3/01/2018 09:47:00 PM

Thank you again for all the knowledge you distribute,Good post. I was very interested in the article, it's quite inspiring I should admit. I like visiting you site since I always come across interesting articles like this one.Great Job, I greatly appreciate that.Do Keep sharing! Regards, 5000 loan