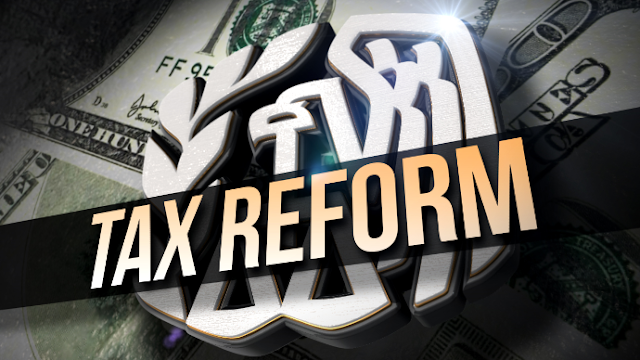 The struggle among Congressional Republicans to design a tax reform bill was an arduous process, with constant opposition and obstruction from Democrats, and more than a little internal discord, as Republicans objected to some features that were contained in the bill and displeased that other features were missing. Now that it has been completed and the Tax Cuts and Jobs Act has been signed into law, whether what Congress produced is good or bad depends upon whom you ask, as is always the case in political matters.

It should surprise no one that liberals/Democrats would not support a bill that lowers tax rates on their hated enemies, the rich and the corporate world, even though it lowered taxes on everyone else or nearly everyone else, too.

These days a perfect bill is virtually impossible, since they most always are hundreds of pages long, and are contain numerous elements, some of which can be guaranteed to evoke opposition. Add to that the idea of transforming the maddeningly complex tax system, and the possibility of a smooth and easy passage quickly disappears.

Predictably, Congressional Democrats are busy using their own special talents to distort the bill to generate public opposition among their constituents.

Sen. Elizabeth Warren, D-MA, was shown on YouTube expelling copious amounts of carbon dioxide on the Senate floor: “[T]his bill doesn't provide middle-class tax relief, it ultimately raises taxes on more than 60 percent of working families in this country,” concerning what might happen years in the future.

She also imagines that Republicans “know that this bill won't raise wages for working people.” Apparently, she hadn’t heard that several large businesses have just raised their lowest employee hourly rate to $15, and others have given $1,000 bonuses. Warren doesn’t let the facts get in the way of a good rant.

But she was actually right one thing: there was “no input from a single Democrat,” since her party refused to participate.

House Minority Leader Nancy Pelosi, D-CA, even referred to the bill as the “end of the world” and “Armageddon.” No enemy of hyperbole, she also stated on the House floor that it was “an all-out looting of America” and “the worst bill to ever come to the floor of the House.”

She charged with a straight face that the bill “raises taxes on 86 million middle-class households” and “hands a breathtaking 83 percent of its benefits to the wealthiest 1 percent of Americans.”

Pelosi recently tweeted: “Shamefully, Republicans were cheering against the children as they rob from their future and ransack the middle class to reward the rich #GOPTaxScam.”

She has suddenly gotten religion about spending, but apparently doesn’t remember that while she was Speaker of the House over $5 trillion was added to the national debt.

And Sen. Chuck Schumer, D-NY, blathered, “Under this bill the working class, middle class and upper middle class get skewered while the rich and wealthy corporations make out like bandits. It is just the opposite of what America needs, and Republicans will rue the day they pass this.”

And this fantasy: “Today, the President gave himself an early Christmas present - an estimated $11 million tax cut. Who paid for it? My middle class constituents in New York,” the vast majority of whom will see their taxes lowered.

What happens when their constituents find out that this trio is lying to them?

Offering his two cents worth, Sen. Bernie Sanders, I-VT, let loose with this bit of idiocy: “Nearly 13 million Americans are expected to lose their health insurance under the tax bill due to the loss of the individual mandate,” Sanders yammered.

The tax bill removes the mandate to buy health insurance; it does not take away anyone’s insurance. The only people who will lose coverage under the bill are those who decide not to buy it. That is called “freedom,” a concept Sanders and those on the far Left don’t understand.

Any bill of this size and complexity will contain something that nearly everybody can find fault with. In such circumstances the adage “don’t let the perfect be the enemy of the good” is sound advice for all of us. And we need to remember that there is ample time to identify problem areas in the bill and address them.

With that in mind, here is part of a summary from The Heritage Foundation that explains important aspects of the bill: The U.S. tax code is sorely in need of reform. The Tax Cuts and Jobs Act is the most sweeping update to the U.S. tax code in more than 30 years. The bill lowers corporate and individual tax rates for the vast majority of Americans, doubles the standard deduction, expands the child tax credit, and repeals the individual health care mandate.

That last sentence identifies measures that are good for the general economy and for most all Americans. Putting more money in the hands of the people will expand economic activity, thereby increasing demand for goods and services, and creating jobs and improving lives.

Congressional Democrats don’t like the tax bill, because the worst thing for their election hopes is a good Republican economy.
Posted by James Shott at 1/02/2018 09:24:00 AM