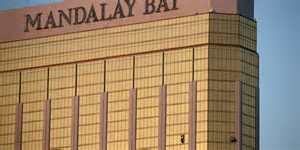 From his position in the Mandalay Bay Resort 32 floors above the concert venue, the shooter in Las Vegas fired away with what sounded like an automatic weapon.

Authorities initially believed there was a lone shooter in the horrifying murder of 59 people and injuries to roughly 500 others. Since then, some wild and crazy ideas have been offered, as usual, as well as other possibilities that are more reasonable. In short, there is much still to learn.

In addition to why he wanted to kill so many innocent people, other questions need answers. New information has been coming regularly since the attack, and more will certainly be learned. If only the gun control faction would wait for more and better information before cranking up the scare machinery.

Was there just one shooter? Some present during the attack claim there was more than one, and Clark County, Nevada, Sheriff Joseph Lombardo acknowledged that the shooter probably didn’t act alone. One video shows what appears to be gunfire coming from a room on the 4th floor.

Why did the gunman have so many weapons in his suite? After the shooter killed himself police found 23 weapons in the hotel suite, along with intricate calculations about how to do the most damage. Police also found 19 more weapons, lots of ammunition and some explosives in the shooter’s home. Some weapons were reportedly acquired legally.

What was the plan for the fifty pounds of an explosive compound that were found in the shooter’s car at the hotel?

Then there is the question of how he ended up in that particular suite, perfectly suited to his evil, cowardly mission, a few days before the attack. How did he manage to get all those weapons into the suite without arousing suspicion?

Did ISIS have anything to do with this, as it has claimed? Reuters reports the following statement from ISIS: “‘The Las Vegas attack was carried out by a soldier of the Islamic State and he carried it out in response to calls to target states of the coalition,’ the group’s news agency Amaq said in reference to the U.S.-led coalition fighting the group in the Middle East.” Did he convert to Islam recently, as ISIS has claimed?

The suspect is described as a white, retired, multimillionaire real estate investor and reclusive gambler with two homes and his own plane. This is an unusual profile for a mass killer. His actions have dumbfounded authorities.  Why did he target the country music concert, and how could he have accomplished all of that by himself?

Never being ones to let a crisis slip away unused, anti-gun advocates use tragedies like this to scare up support for their mission for more regulations and gun bans. But it really doesn’t help when demands for gun bans and more restrictions are so quickly thrown into the mix, confusing the issue, when so many important questions haven’t been answered.

While the Left works overtime to impose restrictions on the legal ownership of firearms that will punish law abiding citizens, one person who once was pro-gun control has studied gun deaths and found that her ideas were essentially baseless.

Leah Libresco is a statistician and former news writer at FiveThirtyEight, a data journalism site.  “Before I started researching gun deaths, gun-control policy used to frustrate me,” she wrote in a column in The Washington Post. “I wished the National Rifle Association would stop blocking common-sense gun-control reforms such as banning assault weapons, restricting silencers, shrinking magazine sizes and all the other measures that could make guns less deadly.

“Then, my colleagues and I at FiveThirtyEight spent three months analyzing all 33,000 lives ended by guns each year in the United States, and I wound up frustrated in a whole new way,” Libresco said.

They found that of the 33,000 gun deaths in the U.S., two-thirds of them are suicides and one-fifth come from young men aged 15-34 being killed in homicides, mostly resulting from gang and street violence and domestic violence.

She asked, “Shouldn’t we try to solve the two types of deaths by gun in the U.S. that account for over 85 percent of gun deaths annually?” Her conclusion was that few of the popularly floated gun control policies would address these deaths, which are the greatest problem.

But perspective is important, too. A Facebook meme says this: “When a sociopath used a truck to murder 85 people and injure 458 others in 2016, it wasn’t a ‘truck problem.’” It concludes: “but when sociopaths use a gun to murder people, why do Democrats always label it a ‘gun problem?’”

An assistant professor at UNLV told her history class when discussing the Las Vegas murders that President Donald Trump’s “rhetorical powers” encourage violence. If that sort of influence is indeed a factor, what about the violence-laden movies that the gun control advocates in Hollywood produce, even as they scream for gun bans?
Posted by James Shott at 10/10/2017 09:02:00 PM

The Left jumps the gun discussing gun control after Las Vegas is really an important topic to be discussed and have some great knowledge to deliver.