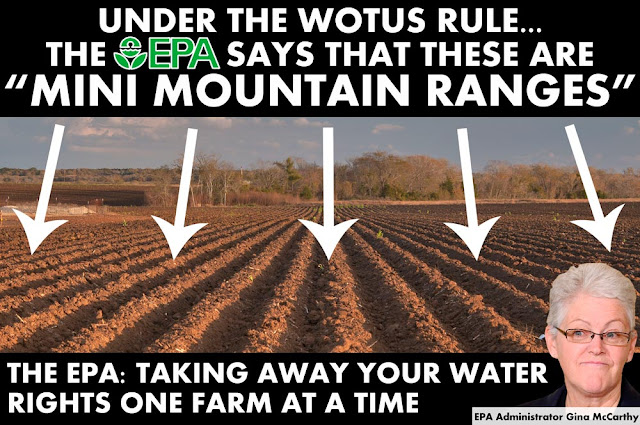 It is a difficult task trying to determine which federal agency has done the most damage to the country and its citizens. A very strong candidate for this dishonor, if not a shoo-in for it, is the Environmental Protection Agency, the EPA.

The EPA’s sins run from declaring mud puddles on private property to be under federal control through the Waters of the United States rule to picking winners and losers and deciding to shut down an entire industry based upon a manic fear of CO2, a compound that is essential for animal and plant life.

A good rule for all of us to remember is, “all things in moderation.” If that is a good rule for CO2, as the EPA asserts, it is also a necessary rule for regulations. Too many regulations really gum things up, stunt our economy, punish taxpayers and businesses, create uncertainty, and the EPA may well be the king in that regard, although the IRS is a strong contender.

President Donald Trump’s EPA Administrator Scott Pruitt has been charged with corralling that agency, and he sat down with The Heritage Foundation’s Rob Bluey at Heritage’s President’s Club meeting to discuss that process.

First up, the topic of “sue and settle” and how that process amounts to backdoor rulemaking.  An article on Forbes online describes the process as follows: “’Sue and Settle’ practices, sometimes referred to as ‘friendly lawsuits,’ are cozy deals through which far-left radical environmental groups file lawsuits against federal agencies wherein court-ordered ‘consent decrees’ are issued based upon a prearranged settlement agreement they collaboratively craft together in advance behind closed doors.” Read that again, carefully.

“Then, rather than allowing the entire process to play out, the agency being sued settles the lawsuit by agreeing to move forward with the requested action they and the litigants both want.”

Pruitt noted an additional irregularity. “But then here’s the kicker: They (the agency) would pay attorneys fees to the group that sued them.” So the group is effectively making “comfortable” rules and the government pays for their lawyers.

Acknowledging the fraudulent nature and duplicity of this process, Pruitt said, “My job is to enforce the laws as passed by whom? Congress. They give me my authority. That’s the jurisdictional responsibilities that I have, and when litigation is used to regulate … that’s abusive. That’s wrong.”

A bit later Bluey asked about the Waters of the United States rule. “[P]eople all over the country have no idea today where federal jurisdiction begins and ends under that 2015 rule,” Pruitt responded. He was in Salt Lake City with Utah Gov. Gary Herbert and an Army Corps of Engineers representative about two months ago when the representative pointed to a thermal drainage ditch and said, “Scott, that is a water of the United States.”

Next, Bluey turned to the Clean Power Plan, asking Pruitt where he sees the EPA going with this regulation.

“It’s not the job of the EPA to say to the utility company in any state of the country, you should choose renewables over natural gas or coal,” he answered. “We need fuel diversity in the general electricity. We need more choices, not less.”

And then the common sense answer that has been absent for eight or more years: “No agency at the federal level should use their coercive power to force business utility companies to take those fuel sources away. They should be making it on cost, stability, and I would say resiliency of the grid.”

Turning to the day-to-day operation of the agency, Pruitt talked about the advisory bodies that provide input into decisions and policy. “The scientists who make up these bodies, and there are dozens and dozens of these folks, over the years those individuals as they’ve served those capacities, guess what has also happened? They’ve received moneys through grants, and sometimes substantial moneys through grants,” he said.

“I think what’s most important at the agencies,” he continued, “is to have scientific advisers who are objective, independent minded, providing transparent recommendations to me as the administrator and to our office on the decisions that we’re making on the efficacy of rules that we’re passing to address environmental issues.

“If we have individuals that are on those boards that are receiving money from the agency, sometimes going back years and years to the tune of literally tens of millions of dollars, over time,” he said, “that to me causes questions on the independence and the veracity of the transparency of the recommendations that are coming our way.”

This pro-Constitution, commonsense rule of law perspective is one that all heads of federal agencies ought to share, and what the concept of constitutional government demands.

After many years of bureaucratic excesses, frequently spurred by political bias, it is refreshing and it inspires confidence to see Scott Pruitt and other administration officials at last focusing on proper management of the government we pay for, but which has so often gone off the rails into ideological self-service.