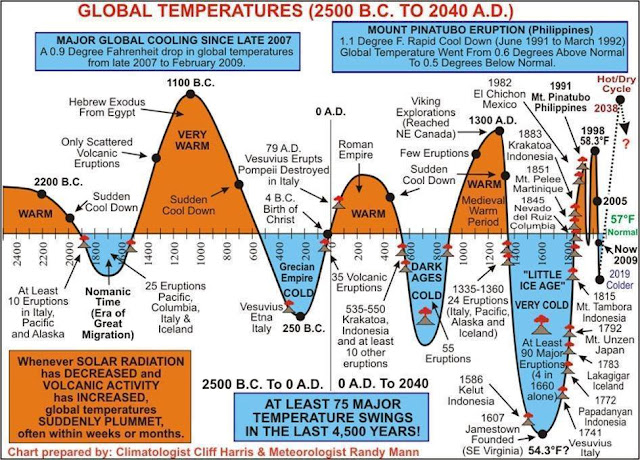 It’s as predictable as the sun rising in the east: when any notable weather event or series of them occurs, the human-made climate change enthusiasts engage their propaganda machine and bombard us with more dire warnings of impending doom. This seems more important to them than the suffering caused and damage done.

When Hurricanes Harvey and Irma struck the southern and eastern US in close succession recently, they were the first two Category 4 hurricanes to do so in the same year in 166 years of record keeping. Immediately, self-identified weather specialists Leonardo DiCaprio and Pope Francis burst forth with dire warnings of human-caused climate change.

Al Gore, who makes his money these days writing books about imagined weather calamities without the benefit of knowledge of the subject, told the World Economic Forum, “This is an unusual time. Within the last two weeks, we have had two more record-breaking, climate-connected storms.”

“We are departing the familiar bounds of history as we have known it since our civilization began,” he said. “And why? Because today like all days we will put another 110 million tons of man-made heat-trapping pollution into the atmosphere, using the sky as an open sewer.”

Creating heat-trapping pollution is one thing Gore does know well. An article in The Daily Signal said this: “According to the report, compiled from public records requests and information from the Nashville Electric Service, Gore’s 20-room, 10,070-square-foot, Colonial-style mansion consumed an average of 19,241 kilowatt-hours per month — more than 21.3 times that of the U.S. household average of 901 kilowatt-hours monthly.”

If global warming/climate change resulting from human activities is really as threatening as Gore preaches, one might expect him to lead the way toward lowering pollution levels, rather than doing the opposite. Gore’s actions and his words send substantially different messages.

Those advocating the idea that the activities of humans harm the environment seem to ignore the bad news for their cause, which is good news for the rest of us: data demonstrates that there has been no real warming for nearly 20 years. That, among other inconvenient truths, is routinely ignored.

Dr. Roy Spencer is a real climate scientist, unlike Gore, DiCaprio and the Pope. His education is in atmospheric sciences, his doctorate is in meteorology, and he works at the University of Alabama in Huntsville. Fed up with the pseudo-science flying around these days, he wrote a book challenging the commonly paraded idea that this season’s hurricanes are what climate change looks like. He argues that these storms are neither an aberration nor a result of rising carbon dioxide in the atmosphere.

A former senior scientist for NASA, Spencer explains that “There have been many years with multiple Cat 4 hurricanes in the Atlantic, but there is nothing about global warming theory that says more of those will make landfall,” adding that “While the official estimate is that this was the first time two Cat 4 storms hit the U.S., since Florida was virtually unpopulated before 1900, we probably don’t really know.”

Spencer cited data of all major hurricanes to strike Florida since 1900 that show no increase in frequency or intensity as measured by wind speed. Florida’s worst hurricane on record struck on Labor Day, 1935, and is one of only three Category 5 storms on record to make landfall in the U.S.

Datasets from the journal “Geophysical Research Letters” in 2011 show that the global number and intensity of tropical storms and hurricanes have not increased over the past four decades, and tropical storms and hurricanes from 1999 to 2011 are significantly below the peak strengths. As with the data showing no atmospheric warming since 1998, this data strengthens the idea that the global warming theory is just a lot of hot air.

But why would actual scientists participate in promoting a ruse without a true scientific basis? Because there is a lot of research money for the taking if you support this hoax.

One scientist finally had enough of the dramatic changes in his field.

In October of 2010, Hal Lewis, University of California, Santa Barbara,
sent a message to Curtis G. Callan, Jr., Princeton University, who was at the time president of the American Physical Society.

“When I first joined the American Physical Society sixty-seven years ago,” Lewis wrote, “it was much smaller, much gentler, and as yet uncorrupted by the money flood (a threat against which Dwight Eisenhower warned a half-century ago).”

“How different it is now. The giants no longer walk the earth, and the money flood has become the raison d’être of much physics research, the vital sustenance of much more, and it provides the support for untold numbers of professional jobs,” he said. “For reasons that will soon become clear my former pride at being an APS Fellow all these years has been turned into shame, and I am forced, with no pleasure at all, to offer you my resignation from the Society.”

This is a troubled time for America. It is a time when some scientists and journalists think their personal concerns are more important than the ethics and standards of their professions, or the needs of the country.
Posted by James Shott at 10/03/2017 11:44:00 PM

Hello there, Can I copy that photograph and apply that on my personal blog?
https://www.heatsign.com

I have no objection. It is not my graphic, is apparently in the public domain, and has a source noted for the data.