Is it desperation, OCD, or is there actually some “there” there? 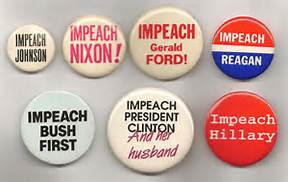 Who dares to deny that the circus-like atmosphere surrounding the Trump presidency is the most unusual political phenomenon in recent memory?

There is a lot of true craziness among the anti-Trump crowd. They criticize him for virtually everything, or nothing. Like the non-story involving Poland’s First Lady, who set the anti-Trump world ablaze when, after her husband and Trump shook hands, she had the audacity to shake the hand of Mrs. Trump before greeting the president. Oh, the horror! And daughter Ivanka sat in for him briefly at the G-20 meeting wearing a pink dress with – gasp – bows on it!

Perhaps the best evidence of compulsive obsession and the Left losing its grip on reality was Rep. Maxine Waters, D-Cal., who wanted to impeach Trump before he was even sworn in.

Other evidence of the high degree of obsession comes from a survey by the drug and alcohol rehabilitation group Detox, which found that “Over 73 percent of Democrats would give up drinking for the rest of their lives if it led to the impeachment of President Donald Trump...” Teetotaling would be good for those Democrats, as well as the country, however the survey did not provide a mechanism for assuring allegiance to the pledge.

It is quite likely that many people who desire impeachment don’t understand what it is or how it works. Impeachment is a political remedy; it deals with breaches of public trust, or injuries done immediately to the society itself, by certain government officials, but not criminal activity.

The grounds for impeachment require the significant likelihood that "Treason, Bribery, or other high Crimes and Misdemeanors" (crimes by public officials against the government), have been committed, according to Article II, Section 4 of the U.S. Constitution. It is not the appropriate solution for those dissatisfied with the results of an election, or the most fervent wish to be rid of a president some don’t like.

Impeachment does not remove a president from office. It is the first step in a two-step process; bringing formal charges against him or her, much like a grand jury indictment. Remember, Bill Clinton was impeached by the House of Representatives in 1998, but went on to serve out his term as president because he was not convicted in step two, the trial by the U.S. Senate, requiring the affirmative vote by at least two-thirds of its members.

The only other successful impeachment of a president was Andrew Johnson, who was acquitted by the Senate in 1868. Richard Nixon likely would have been impeached and convicted over the Watergate affair a few decades back, but avoided impeachment by resigning from office.

The record for presidential impeachment shows it is a difficult process without much success, as deliberately designed by the Founders.

Failures don’t impede Democrats in their efforts at futile goals, however. Obsession and compulsion are tough masters to defeat. Perhaps their real goal is just stirring up negative opinion among their faithful followers to interfere with the president’s agenda.

“If they had a good case based on real information, I think they would mention it by now and put their cards on the table,” said Ken Boehm, chairman of the National Legal and Policy Center, a conservative government watchdog group. He is also a former Pennsylvania state prosecutor and former counsel for the board of directors at the Legal Services Corporation. Talking with The Daily Signal, he added, “They don’t have high crimes and misdemeanors. They don’t have low crimes and misdemeanors.”

Despite any compelling evidence, or even evidence that isn’t compelling, those on the Left who have rallied to the idea include: MoveOn.org, Democracy for America, and other progressive or “resistance” groups, and a group of Congressional Democrats who either don’t understand the issues or the process, or just seek recognition.

After admitting nothing has yet been proved, Kaine said, “We’re now beyond obstruction of justice, in terms of what’s being investigated. This is moving into perjury, false statements, and even potentially treason.”

California Rep. Brad Sherman actually has introduced articles of impeachment, although the House Democrat leadership hasn’t fallen in line with that move. The effort is almost certain to fail because only one Democrat, Al Green, has signed on to it, and based on known facts, it won’t go anywhere in a Republican-controlled Congress.

At some point, however, Democrats must chill down the rhetoric. Emotion and desire, however fervent and crushing they may be, must be put aside, an objective look at the actual case must be undertaken, and then they need get back to performing the national service for which they were elected. Fixing Obamacare and filling hundreds of government positions, for example, are important issues.

Obstruction of the nation’s business and deliberate clouding of the national narrative are harmful to the country.