Illegal border crossings are down, but immigration issues remain 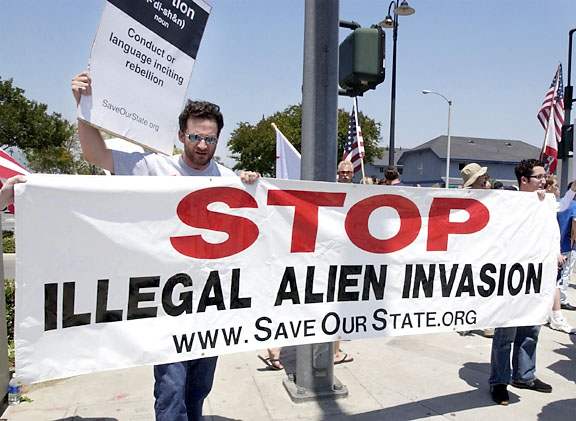 Immigration is the movement of people into a destination country of which they are not natives, or where they do not possess citizenship, in order to settle or reside there, especially as permanent residents or naturalized citizens.

Immigrating to the US is not a right; it is a privilege.

Most folks do not leave their home open to anyone with the desire to enter and live in them. They want to be sure that those they allow into their home do not want to harm them, or damage or steal their belongings.

Likewise, we must not leave the national borders open so that just anyone can come in. We have to make a determined effort to be sure that those who are allowed to legally enter America share our values, or agree to adopt them. They need to get a job and support themselves and their families, and to become true Americans.

The sloppy enforcement of our immigration laws and philosophy in recent years has produced a body of illegal aliens totaling around 11 million, according to some reports. The term “undocumented immigrants” is not appropriate for these people: Immigrants enter the country legally; these people entered the country illegally, or came in legally and over-stayed their visas.

As a result, the good people who come here for the best reasons, but are not here legally, have been overshadowed by the wicked deeds the many bad ones have committed. It’s time for that to change.

Seeing this problem clearly, unlike the previous resident of the White House, President Donald Trump campaigned on tougher enforcement of our borders and other measures to reduce or eliminate illegal entry into the U.S.

Since Trump was sworn in, good things have already started happening relative to illegal border crossings.

As reported in the Washington Examiner, the acting director of Immigration and Customs Enforcement (ICE), Thomas D. Homan, said that since Trump entered office, “illegal border crossings have crashed by almost 70 percent, ‘an historic low,’ arrests inside the country have jumped 40 percent and that demands for illegal criminals in local jails has skyrocketed 80 percent.”

Echoing that sentiment, National Border Patrol Council President Brandon Judd said on C-SPAN that the reduction in the number of illegal border crossers between the U.S. and Mexico is “nothing short of miraculous,” putting the reduction at 53 percent of the same period last year, all before construction of Trump’s vaunted border wall has even begun.

Judd told Fox News, “There’s a vibe, there’s an energy in the Border Patrol that’s never been there before in 20 years that I’ve been in the patrol.”

Complicating the illegal alien problem is the movement by more than 300 cities and counties to protect illegals in “sanctuary” jurisdictions. Homan said that ICE will hire 10,000 new agents and crack down on these sanctuaries. “In the America I grew up in, cities didn’t shield people who violated the law,” he noted.

While denying that ICE is being pressured to meet quotas, Homan said that ICE will focus on targeting fugitives, criminals, threats to national security, and illegals who had previously been deported and came back into the United States.

In a move that runs counter to Trump’s “America First” initiative and efforts to provide jobs for Americans, the Department of Homeland Security earlier this month increased by 15,000 the number of H-2B visas for low-wage, seasonal workers for the remainder of this fiscal year on the basis that many businesses will not be able to find enough American workers this summer.

Defenders of such policies contend that Americans will not work these jobs because they are unpleasant or because they don’t pay enough; therefore foreign workers are the best solution. However, the Center for Immigration Studies found that the average hourly pay for an H-2B visa holder last year was $12.31, roughly 70 percent above the federal minimum wage.

You would think a lot of minimum wage American workers would take that increase in pay, as well as a lot of unemployed Americans who could get back into the labor force, even if temporarily. A Maine resort town, faced with a shortage of H-2B workers, solved their problem by hiring … Americans!

Our immigration problem would not have grown to its current crisis level had past administrations strictly enforced national immigration laws. As a result, millions of people are here illegally. The bad ones are now targets of government, but what do we do with those who are generally good people, except for their method of coming to America?

Some truly just want a better life and are living a generally good, clean life. What is the best way to deal with these “Dreamers?” There is a great sentiment for providing a strict and complex path to citizenship, and deporting millions of them is virtually impossible.