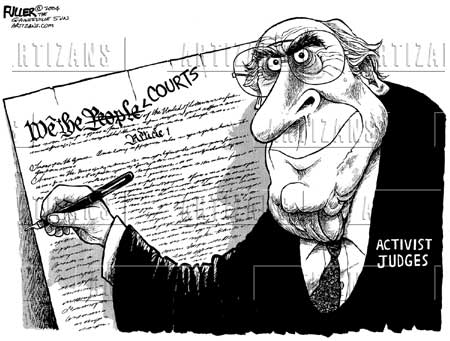 The recent hullabaloo over President Donald Trump’s temporary suspension of travel from seven Middle Eastern countries with ties to Islamic terrorism has dominated the early days of his administration. Trump’s action suspends entry to the country as his administration seeks better methods of vetting potential visitors to the U.S. for national security reasons. This incident has brought to the fore once again the high degree of activism in the federal judiciary.

The first instance of activism occurred in a federal District Court in Washington State, where Judge James Robart allowed a suit by the state’s attorney general to go forward, despite the fact that Washington State did not have legal standing to sue the federal government over Trump’s executive order. To establish legal standing a plaintiff – in this case, the whole of the State of Washington, not some individuals or some entities within the state – must demonstrate that the travel suspension would cause it irreparable harm. According to uslegal.com “irreparable harm” means that “the type of harm threatened cannot be corrected through monetary compensation or conditions cannot be put back the way they were.”

Robarts ruled that a ban on travelers from seven countries “affects the state’s residents in areas of employment, education, business, family relations and freedom to travel,” and said it also harmed the state’s public universities and tax base.

How many citizens of these seven countries actually work or attend a college or university in the state of Washington, and of that number how many are not within the borders of the United States at this time? Is it likely that there are sufficient numbers of them that their absence for another 90 days will actually cause the State of Washington – not the institutions or employers, but the state itself – irreparable harm? It is reasonable to believe that there are relatively few people in these circumstances, and that the harm would be of little significance to State of Washington.

However, in his ruling, Robart said the Washington AG had met the high burden to justify a restraining order by showing that Trump’s order was causing “immediate and irreparable injury,” and that the state had a substantial likelihood of winning its underlying lawsuit challenging the constitutionality of the travel ban.

Interestingly, U.S. District Judge Nathaniel Gorton in Massachusetts reached the opposite decision earlier the same day. He understood the law that gives the president the exclusive authority on national-security grounds to impose the temporary suspension on travel to the U.S., and that under the U.S. Constitution immigration is under control of the president, not the judiciary.

Title 8 United States Code, section 1182(f), which was enacted as section 212(f) of the Immigration and Nationality Act, is entitled “Suspension of Entry or Imposition of Restrictions by President” and states: “Whenever the President finds that the entry of any aliens or of any class of aliens into the United States would be detrimental to the interests of the United States, he may by proclamation, and for such period as he shall deem necessary, suspend the entry of all aliens or any class of aliens as immigrants or nonimmigrants, or impose on the entry of aliens any restrictions he may deem to be appropriate.”

That statement is clear as it can be: the president has the authority to do what Trump did. The president, not the judiciary, has both constitutional authority and statutory authority over immigration, as former President Barack Obama would say, “Period!”

The administration appealed Robart’s flawed ruling to the Ninth Circuit Court in San Francisco, and the three judges who heard the appeal predictably upheld the initial ruling, since this appellate court is notoriously liberal/activist, and has the reputation for being a federal court whose decisions are frequently overturned by the U.S. Supreme Court.

Neither Robart nor the three Ninth Circuit judges – William Canby Jr., Richard Clifton and Michelle Friedland – dealt with the actual law giving the president the authority to do what Trump did in any meaningful way. They acted outside their narrow area of authority and improperly interfered with lawful actions by the president.

Since Robart issued the temporary restraining order on February 3rd, 77 percent of 1,100 immigrants/refugees that had entered the U.S. at the time the situation was analyzed came from the seven countries in the travel suspension, a substantial increase since before the order was issued.

Perhaps none of them are terrorists or will become terrorists and commit some atrocity against Americans, but this is a prime opportunity for terrorists to get into the United States, with the blessing of four federal judges.

Constitutional law scholar and conservative talk radio host Mark Levin termed the appellate court’s decision to uphold the stay as “disgraceful” and “pathetic.” Levin points out that the court has improperly conferred due process and constitutional rights onto this class of individuals.

Judicial activism does not always create potentially dangerous situations, as this incident has, but all activism is harmful to some degree, and must end.
Posted by James Shott at 2/14/2017 04:35:00 PM