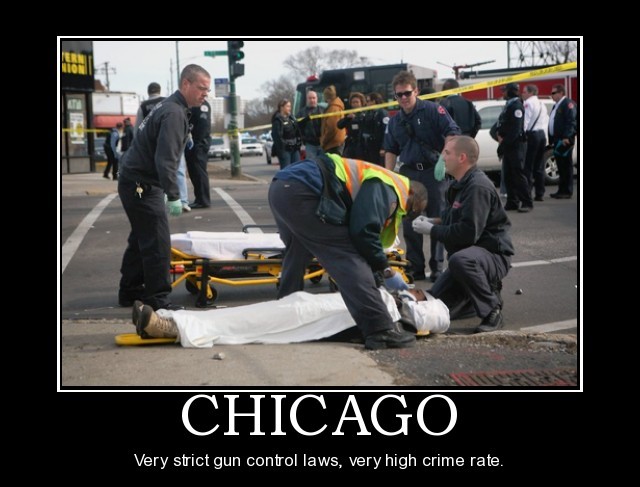 Unless you live on another planet you have heard of the dangerous conditions in Chicago, where the level of violence is and has been at a crisis level for years. Chicago, like other major cities, has rampant crime despite strict gun laws, and the Windy City has one of the higher murder and shootings rates in the country.

On a per capita basis, Chicago does not attract much attention, because of its large population. Based on the U.S. Census Bureau’s last count in 2010, the estimated population in 2016 was 2.7 million, so its murder rate per 100,000 residents isn’t that large. But Chicago still wins a dubious prize for its total number of homicides and shootings.

Data compiled by the Chicago Tribune staff shows that in 2016 there were 4,368 shooting victims in the city, and 762 homicides. Things don’t look much better for 2017: as of Jan. 28, there were 268 shooting victims, which is a little lower than January 2016. But last January was the third lowest month for shootings in 2016, so things could easily get worse.

At least 39 people were shot across Chicago over the Martin Luther King Jr. Day holiday weekend, leaving 10 dead. Six people were shot while attending a memorial service for a shooting victim last week.

Greg Zanis, a retired carpenter, creates wooden crosses for each person killed by gun violence in Chicago and places them in a grassy lot in the city’s Englewood neighborhood. Last year was the deadliest year for gun violence in 20 years, so Zanis was busy, with 762 homicides, up from 496 in 2015.

Some shooting deaths result from action by police officers, but most shootings do not involve police, and are attributed primarily to gang violence. Yet the deaths involving police officers attract much more attention than the far greater number of shootings and murders that do not involve the police. Data taken from the Independent Police Review Authority shows that in 2016 police were involved in only 11 of the 762 total shooting deaths. Police also wounded 14 people. The chance of being killed by a Chicago police officer is only 1.4 percent.

However, in the high-crime minority communities, there is an almost automatic reaction to blame the police in shooting deaths when they are involved, despite the fact that in the vast majority of cases the victim either initiated the incident, or resisted or fought against a proper action by police.

These knee-jerk reactions arise before details are known, and are based upon emotions and prejudice, ginned up by people who try to pass the blame to police, rather than face up to the reality that the victims have brought their fate on themselves through criminal behavior.

This false narrative survives even after police have been determined not to be at fault, and is responsible for protest demonstrations and hatred and mistrust of police. The effect too often makes police reluctant to patrol in the neighborhoods where these confrontations have occurred and are most likely, but where police presence is most needed, which, of course, makes matters worse.

Street violence has increased in the administration of Democrat Mayor Rahm Emanuel, who served as President Barack Obama’s Chief of Staff from 2008 to 2010, and was elected mayor in 2011. In addition to having failed to get control over the crime-ridden city, Emanuel has opened Chicago to illegal aliens, proclaiming, "Chicago has in the past been a sanctuary city. ... It always will be a sanctuary city,” and celebrated when Obama scapegoated Chicago’s police as he exited the White House earlier this month.

In response to the continuing dangerous circumstances in minority neighborhoods President Donald Trump, a major critic of Chicago’s violent living conditions, has said that he might “send in the Feds,” leaving folks wondering just what that means. Some interpreted it to mean he would federalize the Illinois National Guard, while others thought he meant to dispatch federal law enforcement. Neither is likely, given the eroded but still existent protections from such overreaches provided by the Tenth Amendment to the Constitution.

It’s more likely he intends to use federal assets in a more acceptable manner, such as providing federal intervention if requested.

“In Chicago, federal law enforcement could make a difference by using and building on task-force arrangements with the CPD and state police,” he wrote. “High-crime areas could be targeted over a sustained period for investigations of narcotics trafficking, firearms offenses, violent crimes in aid of racketeering (racketeering can include street-gang violence and drug conspiracies), and extortionate interference with commerce by violence or threats. A healthy percentage of the cases developed … could then be indicted in federal court, where the penalties are stiffer and surer.”

Emanuel has failed to reduce crime in his city, but he is amenable to receiving assistance. Perhaps Trump’s focus on big city crime will pay off.
Posted by James Shott at 1/31/2017 05:40:00 PM