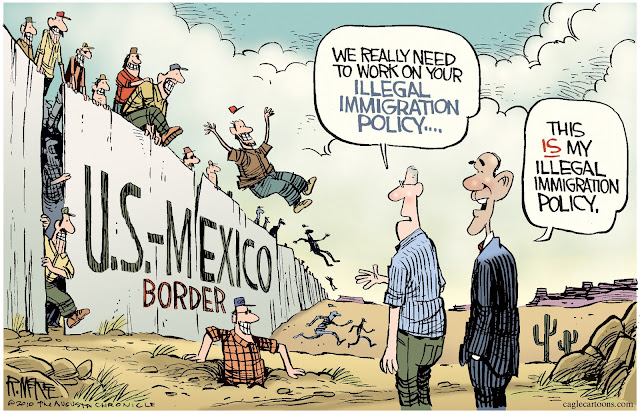 Immigration ought to be one of a nation’s primary concerns, and after the last eight years of lax enforcement of immigration law and the horrible consequences to some individual Americans at the hands of some illegal aliens, President-Elect Donald Trump faces the screaming need to make changes to the immigration process once he is sworn in, and he has stated the desire to do so.

President Barack Obama touts his record on deportations, which some say is nearly 3,000,000 illegal aliens. That certainly is a good thing, but like Paul Harvey famously provided his listeners for so many years, here’s the rest of the story.

The Obama administration did not go around the country rounding up and deporting illegal aliens, some of whom are criminals with varying degrees of violent behavior, including murder. Instead, the Border Patrol caught these nearly three million illegals near the Mexican border as they were entering the country, and turned them around to head back south. Better than nothing, certainly, but far less laudable than that for which Obama takes credit.

In the meantime, the many millions of illegals that have found their way into the country remain, many of them in self-proclaimed “sanctuary” jurisdictions, where local officials brag that they will protect the illegals – criminals and non-criminals alike – from being discovered and deported, or otherwise dealt with as federal law provides.

Like his failure to identify and correctly label radical Muslims who commit terrorism in America and elsewhere, Obama’s failure to properly address illegal immigration will forever be near the top of his lengthy failure list.

It is said, and in proper context it is true, that America is a nation of immigrants. In the earliest days everyone who came to the colonies was an immigrant, and after the colonies gained independence and formed the new nation many other immigrants came to America over the decades and did their part to build and strengthen the nation. But the idea that America still needs immigrants to make it successful and desirable is ridiculous.

American culture was established long ago, so we no longer have a burning need for immigrants for that purpose, or for any purpose. These days, with the foolish suspension of border and immigration control, largely during the term of Barack Obama, the millions of illegal aliens in the country today often weaken our country and pose threats to Americans.

Our country belongs to Americans, those of us whose families have been here for more than a few years, families that have been here for generations. Our Founders created a nation with a unique set of principles from which deep traditions were formed that have survived more than two centuries since the United States came into existence.

We have our ways of doing things – our culture – and a body of laws that evolved from that culture. Americans decide how things are done here, and those who want to come here from places near and far, and places often much different, and many far worse than America, are expected to adapt to our way of doing things.

What sense does it make to do what is required to get to America legally from countries hundreds or thousands of miles away, become a US citizen, and then maintain an allegiance to the land you wanted to get away from instead having an allegiance to America? Or to try to institute the culture of the home you left to come here? If you don’t want to adapt to our way of life – to become an American – why did you come here?

Our policy ought to be: If you want to come here, and you agree to embrace our culture and to assimilate into the American way of believing, living and behaving, and you are a good and honest person with something positive to contribute to America, you will be considered acceptable to apply for citizenship.

What we don’t need, don’t want, and must not abide is people coming here illegally, even if they do so because they truly want a better life in the US. And we also can’t allow those to immigrate here whose national allegiance lies with a country other than the United States. Be an American; accept the country as it is, not as you want it to be. Do not be, for example, a Nicaraguan that lives in America.

Every American needs to understand that there is no divine right held by citizens of other countries to come to America, either as visitors, immigrants, or as refugees. And further understand that America has no obligation to accept people who want to come here. We can accept them, or not, as we choose.

However, America does have the right, and the obligation, to control who it allows into the country, to be sure they are fit to be here, and have something beneficial to offer us.

America became the great and wonderful country that it is through decades of honoring and sustaining its founding principles, and not by kowtowing to the demands of every dissatisfied minority group that believes its desires are more important than our heritage.
Posted by James Shott at 1/03/2017 04:10:00 PM