As Obama exits the White House, a look at some of his presidency 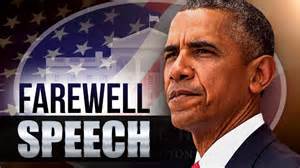 Back in 2007, a candidate for president named Barack Obama arose from near obscurity to seek the Democrat Party nomination for the 2008 election. He won the nomination, defeating a well-known opponent, and then won the election to become the first black/African-American President of the United States, and would serve two full terms.

So much promise surrounded this event that even before his inauguration he was being spoken of in glowing terms because he was the first of his race and for all the great and wonderful things that would occur, based on his campaign messages.

The respected Nobel Committee even awarded him its Peace Prize in December of 2009," only several months after he was sworn in, for his extraordinary efforts to strengthen international diplomacy and cooperation between peoples."

The stage was set for great things; a barrier had been breached. At last America had its first black president. But, alas, so much good that could have happened, didn’t.

Obama doesn’t understand or appreciate the nation he was elected to lead, so his goal wasn’t to honor and advance America’s traditional principles and standards, but to “fundamentally transform” it, as he said repeatedly. That transformation hasn’t been especially attractive.

Quoting an analysis of federal data produced by the Associated Press, the Townhall article continues: “More often than ever, the administration censored government files or outright denied access to them last year under the U.S. Freedom of Information Act, cited more legal exceptions it said justified withholding materials and refused a record number of times to turn over files quickly that might be especially newsworthy.”

Taking office on the downside of a significant recession, eight years later the economy has still not fully regained its former strength. He touts the U-3 unemployment rate as proof that the Obama recovery was successful, but tens of millions who couldn’t find a job dropped out of the workforce, thereby producing an unemployment rate in the respectable range near 5 percent.

The U-6 rate, which counts those discouraged workers that the U-3 ignores – the more accurate figure – sits at approximately twice the U-3 rate, and the Labor Force Participation Rate, which shows what portion of eligible workers are working or looking for a job, is at its lowest point since the late 1970s.

The nation’s productivity has been handcuffed by over-regulation and punishing tax rates, which encourage businesses to move jobs and factories to other nations where the business environment is friendlier. A healthy GDP rate is above the 3 percent mark, but Real Clear Politics (RCP) reports, “Under President Obama, annual economic growth from 2010 through the first three quarters of 2016 averaged 2.1 percent, which RCP termed “subpar.”

Where domestic policy is concerned, The Daily Signal provided these tidbits from The Heritage Foundation last week:

·         200 new regulations have increased the regulatory burden by $108 billion annually, a burden on the shoulders of everyday Americans. Regulations aimed at climate change will kill hundreds of thousands of jobs and increase what American households spend on electricity by 13 to 20 percent over the next 20 years.

·         The Affordable Care Act is anything but affordable. Many Americans have not been able to keep their doctors; 12 of the 23 co-ops have failed, costing taxpayers $1.2 billion, and forcing 740 thousand to scramble to try to find health insurance.

·         Obama’s imperial presidency granted amnesty to millions of illegal immigrants and mandated transgender bathroom policies for public schools by using executive orders to circumnavigate Congress to get his way.

Obama claims that 75 consecutive months of positive job creation during his term is the best ever, which is true. However, this stretch produced 11.3 million new jobs, which is less than two of the last five presidents, according to a report by Business Insider, which says, “Obama ranks third among the past five presidents in total job creation over the length of his presidency — in front of both George H.W. and George W. Bush, but behind Bill Clinton and Ronald Reagan,” with Clinton creating about 23 million and Reagan creating about 16 million.

Under Barack Obama’s heavily ideological presidency America is weaker, more divided, less trusted by its allies, and suffers other ill effects. Voters regarded his leadership as poor enough to cause them to abandon the Democrat Party, producing heavy losses at the federal and state levels.

Despite all of this, in Obama’s highly narcissistic perspective, his was a wonderfully successful presidency. But by American standards, his presidency represents a clear and dramatic failure of leadership, and it will take years to repair the damage his presidency has produced.
Posted by James Shott at 1/17/2017 04:32:00 PM