The Trump transition is well underway, despite his enemies’ wishes 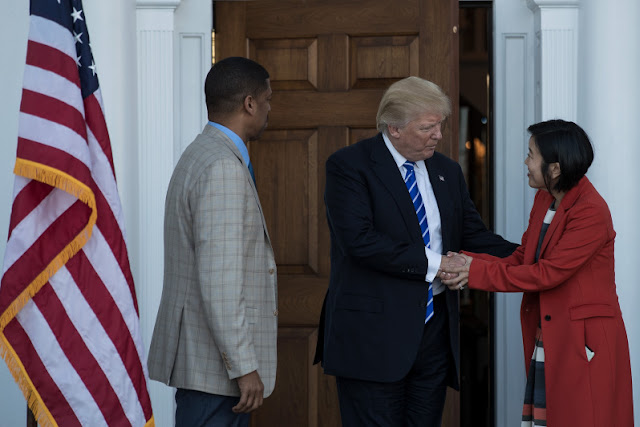 Two weeks after the presidential election, things are moving forward for President-Elect Donald Trump, who is busy selecting individuals for administration posts.

Amid assessments of the transition’s first few days as chaotic and on the cusp of failure, Bannon’s choice drew sharp criticism from the leftist Trump opponents and the major media, who are determined to criticize most everything Trump’s team does or says.

Next came the choice of retired Lt. Gen. Michael T. Flynn as national security adviser, Rep. Mike Pompeo (R-Kan.) as director of the CIA, and Sen. Jeff Sessions, (R-Ala.) for Attorney General, subject to Senate approval, and meetings Saturday with 2012 Republican presidential candidate Mitt Romney, thought to be a candidate for secretary of state, and with retired Marine Corps Gen. James Mattis, who is said to be a potential contender for defense secretary.

Meetings with potential selectees continued through the weekend, stoking the fires of speculation about who might go where and, of course, the predictable Democrat opposition’s criticism of people under consideration, as well as those already chosen.

As bad a choice as media and political enemies believe Trump to be, so far his transition is right on schedule.

Saturday, Trump took action to remove what likely would have become a big distraction to organizing his administration, doing so prior to being sworn in, and which likely would have continued at least into the early months of his presidency. Agreeing to a settlement of $25 million, three lawsuits aimed at Trump University have been resolved. The agreement also includes $1 million in penalties to the state of New York.

Former students of the school claimed that they paid thousands of dollars to learn Trump’s real estate success secrets, but contended that they were lured into paying up to $35,000 to learn from instructors hand-picked by Trump, which they claim did not happen.

The settlement was negotiated between Trump’s lawyers and New York Attorney General Eric Schneiderman and the law firm that brought the suit against the now closed school. The settlement does not require an admission of guilt from Trump, but Trump’s organization issued a statement that said, "We are pleased to announce the complete resolution of all litigation involving Trump University. While we have no doubt that Trump University would have prevailed at trial based on the merits of this case, resolution of these matters allows President-Elect Trump to devote his full attention to the important issues facing our great nation."

If there is a downside to settling the lawsuits, it is that we may never know which side is right. Did Trump defraud the students, or is it merely an opportunity seized upon by students and lawyers hoping for a big payout?

Removing what would have become a huge distraction enables Trump to get on with the business of organizing his presidency, even as his political enemies occupy themselves with petty criticisms about appointments and who he is talking with, suggestions of who he should be talking with, and arguing about whether it was FBI Director James Comey’s handling of the email investigation or the Electoral College that defeated Hillary Clinton, not Donald Trump.

Democrats have begun a move to have the Electoral College, the Constitutional mechanism to determine who becomes president, replaced by the popular vote. At the Constitutional Convention, several methods of electing a president were considered, but the Founders well knew the dangers of consolidated power. After much debate and compromise they devised a system that instead distributed power more broadly, balancing federal powers with those of the states, and providing a voice to all states, not just the most populous.

As Heritage Foundation legal expert Hans von Spakovsky noted: “In creating the basic architecture of the American government, the Founders struggled to satisfy each state’s demand for greater representation while attempting to balance popular sovereignty against the risk posed to the minority from majoritarian rule.”

And the result has been that the Electoral College has provided stability to the process of picking presidents. Though the national popular vote winner typically wins the presidency, that vote failed to determine the winner in four previous elections: 1824, 1876, 1888, and 2000, and the republic survived quite well, thank you.

And the wisdom of the Founders has once again been proven in the 2016 election where the least desirable candidate, Hillary Clinton, wound up with a comparatively thin popular vote margin of 50.6 percent of the vote to Trump’s 49.4 percent; 1.4 million votes out of 124.7 million, meaning that Clinton got 1.15 more votes per hundred voters than Trump did.

A margin this thin is well within the margin of error of political polling, and hardly worthy of the hysteria that has been demonstrated by this miniscule difference in vote totals.

What this effort does best is illustrate the level of desperation, disbelief and unwillingness to accept the outcome that is so firmly ingrained into the political left and their sub-faction, the major national media.