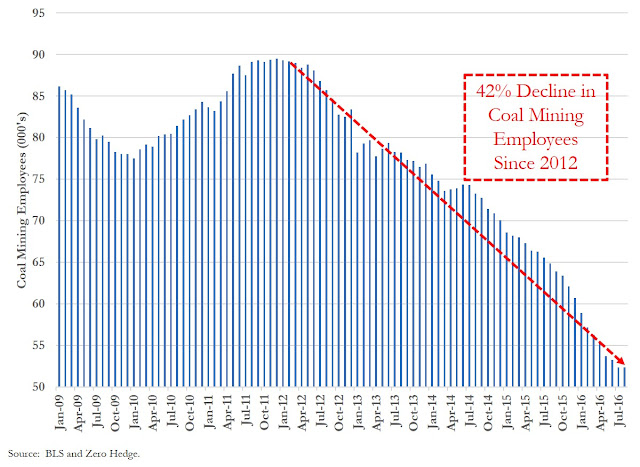 Those who lived in or near the southern West Virginia and/or southwest Virginia coalfields during the peak of the coal business in the 50s and 60s know that state and local economies thrived because of the tens of thousands of people employed by mining companies and the dozens of companies that supported the industry.

Bluefield, WV’s Norfolk and Western Railway yard was always filled with coal cars, many of them full of the world’s most widely used fossil fuel, that were bound for Norfolk, VA’s port, or ready to be unloaded into trucks for delivery. The rest were empty, heading back into the coalfields to be refilled and brought back for distribution.

They remember the bustling downtown that was the financial, shopping and recreational center of the region’s coalfields, and Bluefield’s population of well over 20,000 residents during the time of peak coal. These are valued memories of the good times.

Today’s population is half that size, and the rail yard is often empty. To those who have seen first-hand the decline of the industry and its effects on local communities, the industry’s decline is a very real and painful thing.

The decline began with natural technological advances, as mechanization gradually began putting hundreds of miners out of work. Over time other forces developed, affecting the industry, including the very recent rise of cheap natural gas. Through all of that, there was always a market for coal.

But the federal government’s assault on coal through excessive environmental regulation, spurred by the hotly debated idea that burning coal pours too much carbon dioxide – a gas essential for life on Earth – into the atmosphere, is the greatest problem. President Barack Obama put this attack into high gear. However, today our air is cleaner than it’s been for 100 years, mostly through evolving technological improvements.

Cloistered away in their comfortable offices in Washington, DC, our public servants frequently have no idea what life is like for those toiling away to pay the taxes that fund their salaries. Perhaps if they got out of Washington more, they would understand the problems they create for the people they serve.

This may be the case with Energy Secretary Ernest Moniz, who at the invitation of Sen. Joe Manchin, D-W.Va., finally visited the state after many invitations over the eight painful years of the Obama administration. But while in the state last week, Moniz suggested there is no war on coal, arguing to the contrary that the Obama administration is working to keep coal as an important part of a low-carbon energy future. He also said that cheap natural gas prices are primarily responsible for coal’s downturn.

The absurd idea that there is no “War on Coal” today would be hilarious, if the reality wasn’t so tragic, and the suggestion that the very recent drop in natural gas prices is the principal reason for coal’s decline is simply false.

This general situation was foretold by Barack Obama back in the 2008 campaign: “So, if somebody wants to build a coal plant, they can — it’s just that it will bankrupt them, because they are going to be charged a huge sum for all that greenhouse gas that’s being emitted,” Obama declared.

Assuming that Moniz has the capacity to recognize the misery the administration for which he works has caused for this region, or really cares about the people affected by its policies, visiting West Virginia much earlier in the administration’s tenure might have made some difference.

Hillary Clinton is on that same path. While campaigning in Ohio earlier this year, she said, “We’re going to put a lot of coal miners and coal companies out of business.” Trying to make that sound better, she said she favored funding to retrain those put out of work, but she didn’t say what kind of jobs and how many of them are currently waiting for trained workers.

Not long thereafter, while campaigning in West Virginia, she was asked about that comment by a tearful out-of-work coal miner, to which she responded that what she meant was that coal job losses will continue, according to the Daily Caller. See the difference?

Obama’s energy policy is like putting a square peg in a round hole. If you want to put a square peg in a round hole, take some time and think it through: You should gradually and gently reshape the square peg so it will comfortably and appropriately fit into the round hole. Obama’s method is to place the peg on top of the hole and beat it with a hammer until enough of the corners are destroyed so that the peg will go into the hole. And even then, it is a poor fit.

Just as horse-drawn wagons and carriages gave way to motorized vehicles when they came to be, coal’s role as a primary fuel would have changed as better methods evolved. Such a process would have been not only more humane and less destructive, but infinitely smarter than what has transpired.

Through the centuries humans solved life’s problems and improved their lives through applied intelligence. Somehow, they managed to do this without Barack Obama and the EPA.
Posted by James Shott at 9/20/2016 09:11:00 AM