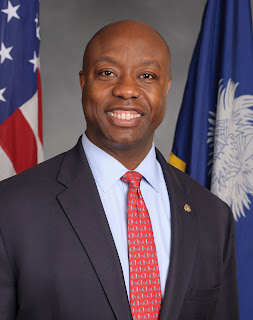 “Mr. President, I rise today to give my second speech this week discussing the issues we are facing following last week’s tragedies in Dallas, Minnesota, and Baton Rouge. This speech is perhaps the most difficult because it’s the most personal,” said Sen. Tim Scott, R-SC, in the Senate Chamber last week.

Scott has a long, distinguished record of public service, serving 13 years on the Charleston County Council beginning in 1995. In 2008 he was elected to the South Carolina House of Representatives, in 2010 he elected to the U.S. House of Representatives, and was appointed to fill an unexpired U.S. Senate term in 2012 and was elected to retain that seat in 2014. He is the first southern African-American senator since the late 1800s.

Scott said that in his first speech “I talked about how the vast majority of our law enforcement officers have only two things in mind: protect and serve. But as I noted then, we do have serious issues that must be resolved. In many cities and towns across the nation, there is a deep divide between the black community and law enforcement, a trust gap, a tension that has been growing for decades. And as a family, one American family, we cannot ignore these issues, because while so many officers do good – and we should be thankful, as I said on Monday, we should be very thankful and supportive of all those officers that do good – [but] some simply do not. I’ve experienced it myself. And so today I want to speak about some of those issues.”

Recalling his first encounter with the police, he said: “The very first time that I was pulled over by a police officer as just a youngster,” the officer came up to the window, “hand on his gun, and said, ‘Boy, don’t you know your headlight is not working properly?’” Scott said he was embarrassed and ashamed. And “scared, very scared.”

That was not the last time he was stopped by police, he said; he has been stopped seven times in the period of a year, and admitted that he was speeding a couple of times, but usually he was stopped for things like driving a new car in the wrong neighborhood, or some other equally trivial reason. “Imagine the frustration, the irritation, the sense of a loss of dignity” each of those times, he said, capping the story off with an incident that happened while he was serving in the U.S. Congress.

After having been in Congress for five years, and at the time in the Senate, an officer challenged him as he entered a government office building. “The pin, I know,” the officer said, referring to Scott’s U.S. Senate lapel pin. “You, I don’t. Show me your ID.” Later that day he received an apology from the officer’s supervisor, but the damage was done. Again. That was the third such apology he had received since entering the Senate.

Police question millions of Americans of all races every year in their effort to “protect and to serve,” and they should always have a legitimate reason for doing so. Obviously, they don’t always have a good reason, as Sen. Scott illustrated. But often they do have reasons, and sometimes it is at least partly due to the behavior of some of those in groups that are often the focus of police bias.

Chicago serves as a prime example, a place where black Americans are most often killed or attacked by other black Americans, not white Americans or police officers. In neighborhoods where back people routinely commit violence and murder against other blacks, why are we surprised that blacks receive greater police scrutiny?

“We’re asking cops to do too much in this country,” Brown said recently. “They’re paying the price for every societal failure. “Not enough mental health funding? ‘Let the cop handle it.’ Not enough drug addiction funding? ‘Let’s give it to the cops,’” he continued. The chief said that society must get in the game.

In response to blacks being killed by police we now see black men assassinating police officers. The shooter in Dallas who killed five officers and injured seven others was black. In Baton Rouge, six officers were ambushed last Sunday, and three of them died. Police killed the shooter, a 29 year-old black man who, according to The Daily Caller, was a former member of the Nation of Islam.

As Scott said, the country is deeply divided; there is a very tense trust gap. Police sometimes unfairly target black people. Many black people assume every death at the hands of police is a wrongful death.

We need leaders to calm the tension, not pour gasoline on emotional embers, to wait for details before reaching a conclusion. And we must make sure that all who do wrong are punished.
Posted by James Shott at 7/19/2016 10:22:00 PM