Lipstick on a pig: Administration putting a spin on the U.S. economy 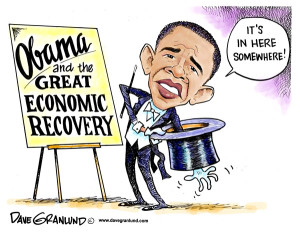 It is natural for politicians to put things in the most favorable light, and the worse the general situation, the greater the need to do so. That serves as an appropriate introduction to the White House’s June economic analysis, which is summarized thusly: “The economy added 287,000 jobs in June, as labor force participation rose and the broadest measure of labor market slack fell.” As far as that statement goes, it is true.

That new jobs number is a decent number – the best jobs figure since October – and miles ahead of May’s revised number of only 11,000 new jobs. But it is not an outstanding number, and is only one of several really significant numbers.

Back in December 2009, six months after the end of the recession and 11 months into Barack Obama’s first term, economist Paul Krugman said that 300,000 new jobs each month were necessary to make up the job losses of the recession over the next five years, so the June figure falls short of that number. In the weak Obama recovery new job production has only met or exceeded 300,000 six times in 89 months. The last was in November of 2014 at 331,000.

Whether the 287,000 number holds up after revision we won’t know until August. May’s preliminary number was revised down by more than two-thirds to a mere 11,000; therefore August may show a downward revision, an upward revision, or a number that is pretty close to the preliminary figure.

Other relevant numbers from the Bureau of Labor Statistics (BLS) data set for June include an increase in the U-3 unemployment rate, the one President Obama prefers to cite, from 4.7 to 4.9 percent. Despite the increase, the U-3 rate still looks good because it discounts all those marginally attached to the labor force that involuntarily work part-time instead of full-time, or have given up looking for work because they cannot find a job. Those workers are included in the U-6 rate, which more accurately represents reality, and stood at 9.6 percent in June, and improved one-tenth of a percent since May, as some of the previously disaffected workers started seeking employment again.

Even so, the Labor Force Participation rate was still at the late-70s level of 62.7 percent. From 66.0 percent in December of 2007 when the recession began, the trend in the participation rate has been steadily downward and has been below 63 percent since March of 2014. The labor force is made up of those age 16 and older that are working, looking for a job, and not in prison or in the military, and totaled 94,517,000 people last month. That means that 56,228,000 working age Americans are not working, and not in the military or in prison.

In June, 1.8 million persons were marginally attached to the labor force. These are individuals who wanted to work, were available for work, and had looked for a job sometime in the prior 12 months, but were not counted as unemployed because they had not searched for work in the 4 weeks preceding the survey.

Another 5.8 million individuals prefer full-time employment, but are working part time because their hours had been cut back or because they haven’t been able to find a full-time job.

The 9.6 percent U-6 rate tells one part of the story, but the actual harm of the administration’s policies that keep the economy from cranking up are another story.

“Today’s jobs number can’t hide the ongoing struggles facing the country’s main jobs producers – small businesses – which are overwhelmed by over-taxation, over-regulation, and a lack of access to credit,” said Jobs Creators Network (JCN) president Alfredo Ortiz. “And it shouldn’t distract us from an underwhelming labor force participation rate—still the lowest figure since the 1970s.”

National Federation of Independent Business president and CEO Juanita Duggan commented, “Each month our survey shows that small business owners are trying to hire qualified workers,” and, “The job openings are there, but owners are not going to invest in new employment when labor costs are becoming insurmountable, and the political climate is wildly uncertain.”

All the way back in November of 2010 President Obama was already claiming a “new normal” for the economy: “What is a danger is that we stay stuck in a new normal where unemployment rates stay high,” he said on CBS “60 Minutes.”

Today, with a real unemployment close to 10 percent, Obama may be viewed as a pretty good prophet. However, rather than seeing the future, he engineered it, and the term “new normal” is much less a reality than an excuse. As the JCN’s Ortiz noted, high taxes, rampant and intrusive regulation and limited credit do not a good recovery make.

America deserves better. November’s election provides the opportunity to elect as president someone who understands job creation.
Posted by James Shott at 7/12/2016 03:24:00 PM

If Obama was in the GOP, you'd be trying to rename airports and highways after him.

The U-6 shows real unemployment, as was explained, had you thought about the information you read (or didn't read), but that's to be expected from folks who think Obama is wonderful and without fault.

I’m not sure why you’d think I didn’t read the column. I was pretty explicit in addressing each different type of unemployment measurement when pointing out just how low those numbers have gotten now since Obama took office. I mean, I can read and look up statistics. I pointed to both the U3 and U6 so, you know, you couldn’t try to claim I didn’t know the difference between the two measurements and then insult me. I mean, I read you so I pretty much expected it. Yet, you tried anyway. .

I’m not sure how you can get around those numbers no matter how hard you keep trying. But pointing out that the employment numbers are pretty much half of what they were around the time Obama took office is probably not the route to go.

There are serious critiques to be made of Obama, Smokey - you just don’t make them. As I said before, even the previous GOP candidate for POTUS said that if HE could get the U3 number to 6% by the end of his term, then that would be a success. Here you are telling me that 5% is a failure while claiming I can’t read after simply pointing out history. Pretty funny.

The "recovery," such as it is, is pitifully slow, the slowest in a long while. Obama could have made it better, but he didn't.

5% U-3 unemployment looks good, of course, because it ignores so much relevant data. There's no way to excuse the economic tragedy Obama's policies have foisted on Americans, hence the title.

I don't expect you to ever agree with what I write, Mr. (or Ms.) Anonymous, but I'm pleased you do read.