The Transportation Security Administration is failing the public 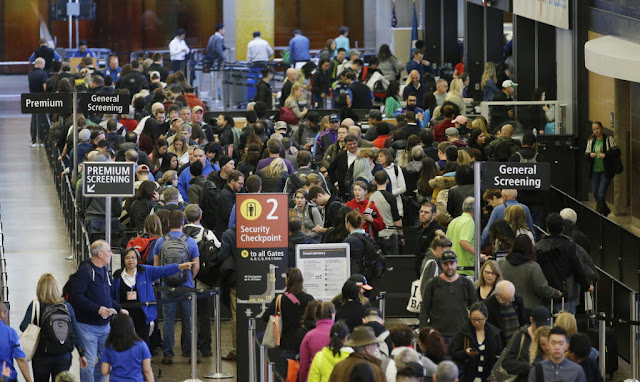 The Transportation Security Administration (TSA) has been in the news a lot lately, and not because of the number of terrorists that it has caught trying to board domestic and international flights originating in the U.S.

The most flagrant set of problems occurred primarily at Chicago’s O’Hare International Airport, where waits of up to three hours to get through the security check occurred, and the more serious situation where travelers had to spend the night in the O’Hare terminal on cots furnished by the airport because the long wait caused them to miss their flights. It is estimated that as many as 4,000 travelers have missed flights at O’Hare since February due to slow security checks. These are a painful testimony to just how badly the security check problems have become.

Citizens Against Government Waste (CAGW) predicts a long, hot summer, blaming the TSA’s inept bureaucracy for being unable to provide an efficient security check process at American airports. CAGW blames the TSA directly, rather than other things, like budget cuts or a smaller workforce, which are offered up as excuses.

“This blame shifting simply does not stand up to scrutiny for TSA, whose fiscal year (FY) 2016 budget of $7.3 billion is one billion dollars and 16 percent higher than in FY 2007,” CAGW notes.  “TSA’s full-time workforce rose by 4.3 percent over the last decade, even as air travel at major airports decreased. To date, 22 airports have dropped TSA and switched to more cost-effective, flexible, and efficient private alternatives.  The massive lines of outraged passengers have caused airports in Atlanta, New York, and Seattle to announce they would like to privatize security as well.”

Homeland Security Secretary Jeh Johnson has said that passengers must accept the new reality of “increased wait times as you travel,” but assured air travelers that TSA would be asking airports for help with “nonsecurity” activities, speeding the process. And he said that the number of carry-ons "has a lot to do with the wait time." Airlines have begun charging for extra bags being checked through, which encourages passengers to carry more bags with them into the passenger cabin, slowing the security check process.

These problems will likely increase as air travel picks up in the summer tourist season.

Underscoring CAGW’s accusation of incompetence is this from the New York Daily News: “The Transportation Security Administration assistant administrator who received $90,000 bonuses despite failed security tests at U.S. airports has been replaced, a government agency said Monday.” Kelly Hoggan, who testified before Congress about multiple TSA problems earlier this month, has been reassigned within the TSA.

2. Enlarge and Strengthen TSA PreCheck - TSA PreCheck is a trusted traveler program that allows members to expedite the security process after going through a background check and vetting process. The program allows TSA to move its resources towards a more risk-based approach by focusing less time on low-risk travelers.

3. Ensure Airport Screening is Subject to Risk Assessments and Red Team Tests - Waiting in TSA lines is partially alleviated because the TSA is supposedly providing extra security. That’s why it’s important to continue assessing the effectiveness of the TSA’s security measures. Red Teams, or undercover agents are one way to test that TSA security measures are working. In the meantime, it’s up to passengers to also take personal responsibility in preparing themselves for security checkpoints.

But perhaps the answer lies not in how to repair a broken and dysfunctional federal bureaucracy, but in replacing it with a private sector solution.

Like Postal Service workers who are frequently friendly, courteous and competent, TSA workers also display these qualities. But like the Postal Service, the TSA is a broken and largely failing agency.

Government agencies operate in a system that provides guaranteed clients, guaranteed revenue, and no competition, hence there is little incentive to be effective. This is why few of the multitudinous activities of the federal government are successful.

Our government keeps growing, finding ever more things that it believes need federal attention, all the while adding bodies to the federal payroll, increasing costs and delivering less than we deserve.

Airport/airline security really is mostly the concern of the individual airlines and airports – after all, they have the most to lose from a security failure and more to gain from being recognized for security successes. Why, then, should the federal government attempt this important mission with its history of ineffective bureaucratic methods?

Private businesses have not only the pride factor in their operation, but also the profit motive. If they fail to do the job satisfactorily, they will be replaced, and that adds an incentive to preform well that government agencies simply do not have. Competition drives success.

The big government mentality sees all problems as federal problems and big government solutions as the only means of salvation. Bureaucracies are self-sustaining parasites living off citizens, and mostly failing them.