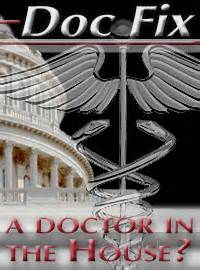 If the “doc fix” hasn’t yet been approved and isn’t approved today, both Medicare and Medicaid patients may have a far more difficult time getting medical care. And if it is fixed this time, what will happen when this fix expires?

This is yet another of the blessings of Obamacare, the Patient Protection and Affordable Care Act, enacted in 2010, and through tortured legal reasoning was ruled constitutional by the U.S. Supreme Court.

Obamacare is not the first government action to reduce reimbursements for Medicare and Medicaid patients, but because Obamacare put millions more people in the Medicaid system in order to increase the number of Americans who could then be counted as “insured,” it gets credit for the current crisis. And to keep down vocal physician opposition to adding millions more to an already broken system, Congressional Democrats who created Obamacare included a two-year increase in reimbursement rates that are now set to expire April 1, and that means the lower reimbursement rates will be back, if the “doc fix” isn’t passed.

Doctors generally get paid less for Medicaid and Medicare patients than their cost basis in treating them, and situations like this one magnify that problem. Consequently, some doctors limit the number of Medicaid and Medicare patients they see, and some do not treat them at all. Don’t be surprised if this situation causes more doctors to join those ranks every year until reimbursements for services to these patients are stabilized at a higher level so that doctors don’t lose money treating them.

On one hand we should support efforts to reign in absurdly high levels of government spending, which in 2014 was approximately 17 percent higher than revenue, meaning that for every dollar of tax revenue there’s 17 cents of deficit spending that the government has to borrow. But on the other hand, shortchanging physicians who treat America’s elderly and low-income or welfare-supported citizens is a foolish way to do that.

This is especially unfair to Medicare patients, who are not welfare recipients, and who, of all those who receive government benefits, are truly entitled to them. They receive essentially their own money, and that of their employers, both of whom had money taken from them by the government to fund Social Security, and later Medicare. These benefits are not the same as Medicaid, food stamps, child support and other welfare money.

The Social Security Act was passed in 1935 and is a promise government made to American workers and their employers that the money government took from them would be put in a trust fund and invested, and returned to them in their later years.

Predictably, the government then used that money for other purposes, not for the benefit of the people the Social Security Trust Fund exists to serve. The Trust Fund is now bankrupt, for all practicable purposes, being in the red approximately $300 billion.

And that raises the question: How is it possible that the Social Security Trust Fund, which was built by the monetary contributions of its recipients and their employers, can run out of money, but the “fund” that pays from $700 billion to $1 trillion annually for welfare in all its numerous forms, never runs out of money?

The “doc fix” that will help doctors who treat Medicare and Medicaid patients will also add to the deficit, and that obviously is bad. We need to spend less money, but we also need to not limit medical care to those who need it. The solution lies in repairing the Medicaid system, which provides care to millions, and many are perfectly capable of funding some or all of their own care. Welfare must be reserved for those who are truly needy and have no other solution.

And now, from centuries ago, here is a statement addressing the situation in which our once great nation now finds itself:

"A nation can survive its fools, and even the ambitious. But it cannot survive treason from within. An enemy at the gates is less formidable, for he is known and carries his banner openly. But the traitor moves amongst those within the gate freely, his sly whispers rustling through all the alleys, heard in the very halls of government itself. For the traitor appears not a traitor; he speaks in accents familiar to his victims, and he wears their face and their arguments, he appeals to the baseness that lies deep in the hearts of all men. He rots the soul of a nation, he works secretly and unknown in the night to undermine the pillars of the city, he infects the body politic so that it can no longer resist. A murderer is less to fear. The traitor is the plague." - Marcus Tullius Cicero (106-43 B.C.)
Posted by James Shott at 4/01/2015 09:33:00 AM