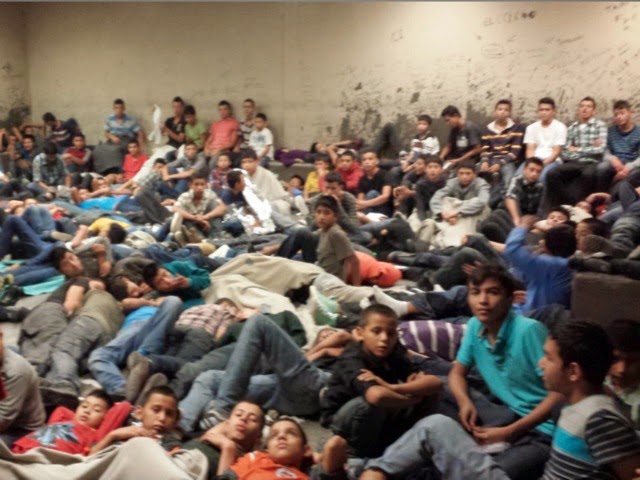 As a result of inadequate security measures along the southern border, the Obama administration’s leniency toward illegal entry into the country, and the idea of amnesty for illegal immigrants, the long-standing border security problem is now at crisis level due to the recent tsunami of Central American young people arriving in the US.

These kids left their homes in Honduras, Guatemala and El Salvador because of horrible conditions in those countries, entered Mexico and traversed the length of the country in an arduous journey frequently highlighted by unspeakable abuse, and crossed the border into the US.


That so many thousands could accomplish this ought to be more than a casual curiosity. Don’t you wonder how these young people can get into Mexico and travel more than a thousand miles through the country to the US border without being arrested and imprisoned? This question is particularly curious considering what happened to the US Marine war veteran Andrew Tahmooressi, who merely made a wrong turn at a confusing intersection on the border, accidentally ended up in Mexico, was arrested and has been in a Mexican jail for nearly four months. How do thousands of these kids who willfully enter Mexico illegally avoid arrest when an innocent wrong turn and a few minutes in Mexico gets Sgt. Tahmooressi put in jail?

However they manage it, when they cross the Rio Grande, the youthful illegals follow instructions to the Border Patrol station and turn themselves in. "They know that once they get to the station, we are going to give them paperwork and we are going to set them free into the United States," said Chris Cabrera, a leader of the local chapter of the National Border Patrol Council, a labor union representing U.S. Border Patrol agents.

"Most of the time, they're getting released to relatives in the U.S.," he said. "There's nowhere to put them, so they're released on their own recognizance and have a pending court date. I'd say between 95 and 97 percent of adults or youths don't show up for court."

So, due to a “soft on deportation” government attitude that serves as an invitation to people in Central America, and a fatally flawed US border policy that allows illegal aliens to easily enter the country by the thousands, they illegally cross the border and shortly thereafter disappear into the ether.

This huge influx has secondary effects that are potentially much more problematic: their presence forces border agents to be transferred away from the border so they can handle the kid tsunami, making it even easier for others to come in, such as members of drug cartels, members of MS-13 gangs, human sex traffickers, and people from the Middle East, China and Russia. Who knows what horrors these people may intend to unleash on our country?

Despite this disgraceful reality, the whitehouse.gov website tells us: “… today border security is stronger than it has ever been."

We are also told that deportation of illegals is at record levels, but Department of Homeland Security Secretary Jeh Johnson admitted before the House Appropriations Committee that “a very large fraction” of deportations aren’t really deportations, but instead are “turn-backs” at the border. Categorizing “turn-backs” as “deportations” paints a rosy but inaccurate picture: actual deportations are down sharply.

Let’s be honest: With his pen and his phone Barack Obama takes care of the things he thinks are important, like trying to lessen the damage of the Affordable Care Act, even if doing so is not legal or constitutional. Everything else he tosses aside with simplistic denials, or third grade humor, like "Maybe they'll need a moat. Maybe they want alligators in the moat."

He could have fixed the porous southern border and stemmed the influx of illegal aliens entering the country, but instead his actions made the situation worse, because fixing this dangerous problem is not important to him.

Mr. Obama wants nearly $4 billion in “emergency spending” to take care of these youthful illegals, but the situation does not qualify for emergency spending. The border crisis isn’t “sudden, unforeseen and temporary,” as the law requires.

Even so, the plan as outlined puts precious little of the funds toward securing the border, and lacks details on how the program would work, and how the money will be spent.

This situation has to be remedied as soon as possible. Some laws must be changed so that illegals from Central America aren’t treated more liberally than those from Mexico and Canada. Then secure the border.

Building a wall on the border, like a fence around your property, helps you control who comes in; it is an act of sovereignty, of common sense. Support it with agents and observation methods, and a second fence, if needed.

Americans are compassionate people who truly desire to help those in need, but we cannot do so at our own peril, as is the case with promises of amnesty and reckless border policies.
Posted by James Shott at 7/15/2014 09:26:00 AM