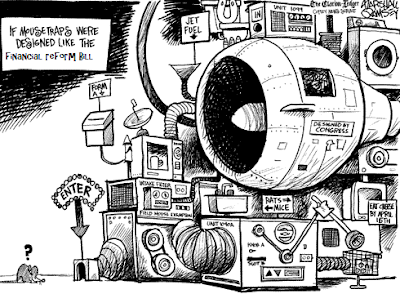 Following the financial crisis of 2008, the U.S. Congress rushed in on its white horse to save the day. Its solution: a huge bill designed to reign in those naughty big banks and Wall Street firms whose greedy executives created this crisis.

Never mind that Congress tried to fix problems a few times before, and in doing so contributed substantially to this crisis, and that many of its current members supported those efforts. Undaunted by previous failures, Congress yet again created a solution that would prevent this from happening again: the Wall Street Reform and Consumer Protection Act of 2010, better known as Dodd-Frank, after co-authors Sen. Chris Dodd (D-Conn.) and Rep. Barney Frank (D-Mass.), and the new law has made things so much better, right?

“It's in the aggregate, in weighing benefits against costs and in pondering the unintended consequences, that Dodd-Frank starts to look like a threat to our financial system.” So wrote Neil Weinberg in American Banker a year ago. “At 2,319 pages, including 250 amendments, and with vastly more rulemaking to come, Dodd-Frank's costs are only now starting to mount,” he said.

“Whether all this will make our financial system safer is an open question. Even Barney Frank would likely concede that the hugely expensive Sarbanes-Oxley Act of 2002, of which he is a fan, has not had the intended effect of wiping out corporate wrongdoing. What's not in dispute is that Dodd-Frank will impose a major drag on the business of commercial banking and have numerous knock-off effects that were neither intended nor necessarily desirable.”

Among those possible unintended consequences: Fewer and bigger banks, as the cost of compliance forces banks to merge; higher consumer costs, as banks must pass on their higher regulatory costs to their customers; and fewer mortgages, as banks flee the mortgage business in reaction to onerous elements of the law.

A month later co-author Sen. Chris Dodd, who retired after the law passed the Congress, wrote an op-ed in The Washington Post titled “Five myths about Dodd-Frank,” in which he defends the law against criticisms, although different criticisms from those Neil Weinberg discussed. “After a worldwide financial meltdown — and a $700 billion taxpayer-funded bailout — the need for common-sense financial reforms was clear. But now, even though the Wall Street Reform and Consumer Protection Act of 2010 … is only beginning to take effect, critics are launching false attacks against the law in an effort to undermine it. Whether they are intentionally misleading or just misguided, they are wrong about the law’s purpose and impact.”

Sen. Dodd may not view his work as harmful from his disconnected and distant perspective, but the people who are directly affected by it do.

American Bankers Association President Frank Keating, had this to say about the effects of the law in a letter to Treasury Secretary Timothy Geithner in June of last year: “While I appreciate that you share our desire that the law not operate to the harm of community banks, I must report and emphasize that in actual practice the Dodd-Frank Act is already operating to the detriment of community banks and promises community banks further harm. … I have spent the past six months meeting leaders of thousands of these small banks across the country. There is uniform concern, anxiety, frustration and anger among these community leaders, who feel betrayed by Washington,” the letter said.

“Though Congress and administration officials have attempted to reassure these bankers that Dodd-Frank is not about them – that they are held harmless by the law – the reality is quite different,” he continued. “True, the law on paper distinguishes between banks by size. But its $10 billion threshold – used to “exempt” smaller institutions from provisions in the Consumer Financial Protection Bureau and the Durbin debit-interchange amendment – is arbitrary and artificial and is not working.” 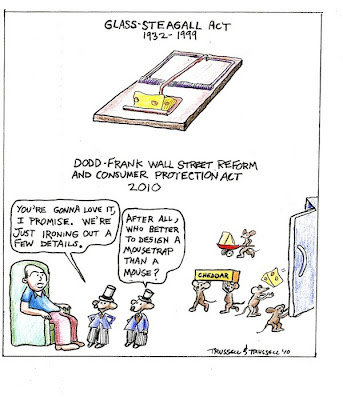 A truly dire warning about Dodd-Frank’s likely effects comes from former Chairman of the Federal Deposit Insurance Commission (FDIC), Bill Isaac, who told Larry Kudlow on CNBC’s “The Kudlow Report” in March of this year that community banks have a lot to fear from the law’s financial reforms. “The bigger banks can absorb it, the smaller banks can’t,” he said. “I would not be surprised to see half of the community banks in this country go out of business if we don’t give some relief from Dodd-Frank for them.”

Community banks are owned and operated by people in their community, and still possess that local focus and personal touch that larger institutions usually do not have. They tend to focus on the needs of the communities where the bank has branches and offices. The people who make lending decisions understand local needs and are themselves members of the community.

Community banks did not create the problem, but as Bill Isaac, Neil Weinberg and Frank Keating demonstrate, they are suffering under the regulations that were supposed to target those who did.

If things at your community bank change for the worse, be sure to blame the U.S. Congress instead of the bank. Better yet, why not pressure members of Congress to takes steps to save those valuable local businesses before it’s too late.

Banks would normally go for buying gold bars as a means of investment, however, I guess it's high time that they should acknowledge entrepreneurship whether it's big or small as long as it has potential. Business is a good investment provided that you have the experience and the know-how.

The problem today is that most people don't handle money well when they have it. They tend to lose it. Proper knowledge is key and the willingness to learn is vital. I've gone far as consulting a loan modification lawyer just to be a hundred percent sure if my decisions are correct.

I am thankful to the congress for devising ways to help us recuperate from the recession. Many business owners tend to think that bankruptcy is the end. They should see the bigger picture, its a fresh start to get back again on track. Learning from mistakes is essential to a starting business and if done right, success is achievable.

For the congress, I think it's always better if they take in some time in studying what would be the possible effect of their move to the public. Since, we are still recovering from the aftershocks of financial crisis we have in 2007, it is always better to take things step by step to avoid any severe damage or another domino effect to the economy.

Yeah, I've been guilty of that Ryan. I'm one of those people who has been hit hard by the financial crisis during that year partly because of negligence and mismanagement. Though I'm very thankful for everyone who helped me especially my lawyer that I was able save whatever I could.

I think that they should wait and weigh out options. Rushing things is not a solution and it would just make things worse.

Come up with the best solution possible upon weighing all the options. Having this idea on mind, the trading system will run smoothly.

In this crazy and turbulent world we live in, it is important to practice self-reliance. Start by earning a college degree and backing yourself up with impressive credentials. The only way you'll survive is having a decent job that'll back your future up.

Rushing things up isn't the best solution for the financial crisis we are currently experiencing. What best the congress or the public could do is to have a quick overview on the economical stature of the society and come up with the best possible solution to get through with it.

To be able to cope up with the aftershocks of financial crisis it is important that each and every sector in our society, private or not or in whatever industry they are in should work hand in hand to stabilize the still shaky and rocky status of our economy. This way, people from all over will avoid the drastic and chaotic effect of the said incident may it be and businesses will be able to cope up with what they've lost.

It seems that there is a need to tell the higher-ups that their means of intervention is rather off. If they're planning to intervene with the goings-on in the economy, they better check the finer points first.