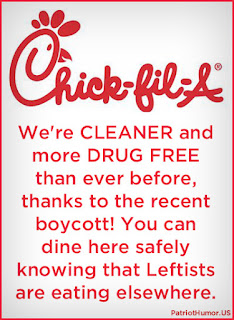 Never being a group that believes in tolerance, except for everyone else, the lefties have their panties all in a wad because Chick-fil-A’s owner does not bend to political correctness pressure to accept gay marriage over the traditional definition of marriage that has been around for thousands of years. He values his religious beliefs ahead of society’s fads of the day, and is willing to put his business on the line for his beliefs. That takes courage.

In an effort to intimidate owner Dan Cathy, the lefties tried to mount a boycott of the restaurant chain, but it seems to have backfired, as today people who also don’t accept gay marriage over the traditional form, or who object to the intolerance and thuggish methods of the lefties, flocked by the thousands to have a Chick-fil-A sammich at restaurants nation-wide. 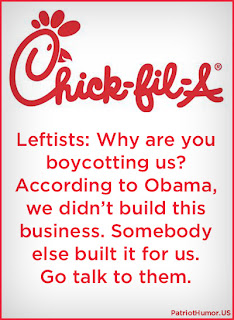 At the local site lines were backed up for 90 minutes most of the day, and reports indicate this was a common circumstance.

Some look at this as a freedom of speech or freedom of religion issue. Others see it “hate,” which is a bizarre and absurd assertion. Not wanting to change thousands of years of traditional marriage hardly constitutes hate.

Personally, I don’t care what two consenting adults do, so long as they don’t hurt someone else in doing it. However, traditional marriage is the basis for not only our culture in the United States, but also of a majority of the nations of the world. Abandoning it, as the U.S. has done over the last few decades, is responsible for much of the devolution of society.

What I object to is redefining something so all-encompassing as marriage and the traditional family to suit a small minority of people. It is dumb in the extreme.

Typical of the left, what they cannot change through reason and persuasion they try to eliminate through force and intimidation. Cowards, all.

I have the feeling that Chick-fil-A will survive this pitiful attack.

Same sex marriage is one item on list of things on which we will never agree.

For what it's worth, I don't oppose gay unions; I just think that gay unions aren't marriage and can't be marriage, given that marriage is an institution evolving from raising families.