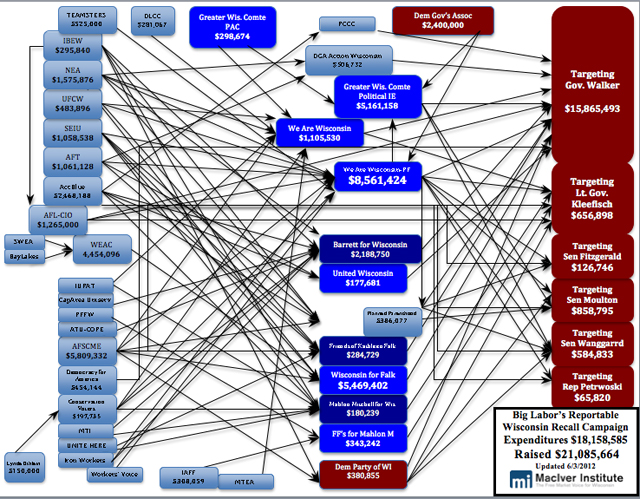 Walker and Kleefisch both won handily against Democrat opponents, 53-46 percent and 53-47 percent, respectively, approximately the same margin by which Barack Obama won the presidency in 2008.

It was a much bigger victory, however, than some news outlets would have you believe. [begin ital] The New York Times [end ital] and [begin ital]  The Washington Post, [end ital]  for example, said Gov. Walker “survives” recall, as if he won by a point or even a single vote. Some media called Mr. Obama’s 2008 seven-point victory a landslide, but with a seven-point victory, Gov. Walker merely “survived.” Six- or seven-point margins are solid wins, but not landslides, even when Mr. Obama is the winner.

At the root of this upheaval was Wisconsin’s adoption last year of sweeping reforms that curbed collective bargaining rights among government workers, brought the state’s pension system into line with private sector pension systems, and empowered public sector workers to choose whether or not to pay union dues. This bill was passed to save Wisconsin some $30 million in the 2011 fiscal year, helping to reduce a substantial budget deficit.

This was an exercise in union excess. The fact that Scott Walker won the General Election and did what he promised to do in the campaign is not sufficient reason to demand a recall. Given the frequency with which campaign promises are forgotten after the election, one could make a case that the Governor’s performance is reason for celebration.

And speaking of his performance, it has been pretty good.

As of April of this year, BLS numbers showed marked improvement:  the labor force was about the same at 3,068,900 workers, but 2,863,590 were employed, the number of unemployed had fallen to 205,310, and the unemployment rate was 6.7 percent. Approximately 34,000 of the unemployed had found a job. Is that level of improvement in little more than a year bad, or good?

The recall election is a mechanism designed to remove officials during a term of office, but is not a method intended to undo an election because some political faction is unhappy with the results. The people at-large made their decision, and the union faction did not prevail. Barring some illegal activity by those duly elected, everybody should just take a deep breath and wait until the next election.

The ill-conceived recall cost the state millions of dollars and distracted everyone in state government from doing the work they were elected or hired to do. According to polling data, many Democrat voters recognized that the recall was a bad idea, and voted against it because they disagreed with the recall movement more than they disagreed with Gov. Walker’s performance.

This effort is a black eye on the union, conjuring up images of children stamping their feet when they don’t get their way. It epitomizes what is wrong with labor unions, particularly public sector unions: excess.

There is nothing inherently wrong with organized labor, and indeed, there were very good reasons for labor to organize in the past. However, labor law has evolved to a point where laws now mostly control the relationship between employers and employees, eliminating the abuses that were the reason for unions to have originated. Unions simply are no longer needed to protect workers from abuse, and they now focus not on a safe and fair work environment, but on pay levels that are higher than market value and special perks, all of which boost costs for employers.

And that is particularly so in the case of public sector unions. Since government determines the labor climate and is the arbiter of labor disputes, to have a union representing government workers against the government is totally nonsensical.

The problem posed by the Wisconsin recall madness is far less the responsibility of rank and file union members, many of whom have no choice whether to join a union or not, than of union leadership – which uses political donations and pressure to gain excessive pay, benefits and special perks for members – and the politicians who were more responsive to the lure of financial support and votes than to their responsibility to the taxpayers for whom they work.

It is not the members’ fault if they have an unrealistic level of job perks, and they do feel they are treated unfairly when someone wants to take something away from them. Their position is understandable, even if their level of protest is not.

But the reality is that the level of pay and benefits of public employees places an unfair burden on the taxpayers, and has to be fixed to help restore fiscal stability to the state, and Scott Walker’s first responsibility is to all the people of Wisconsin, not the public employee union.

It is the first step in restoring balance to the realm of public employment.

Excellent article. I really have a had time with unions for "our servants," public employees!

Hopefully, this will start an avalanche of change.