Voter photo IDs: Are they evil incarnate or electoral salvation? 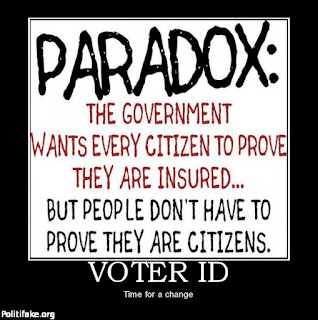 There is great consternation and wringing of hands throughout the land over the idea that in order to vote a person must show a photo ID to verify that the voter is who he or she says they are, and is registered and eligible to vote. The resistance to this common sense requirement is astonishing.

Why are so many people afraid of measures to assure that potential voters are legal and registered?

The popular excuses are 1) that requiring a photo ID places an unnecessary hardship on some legal voters, and 2) that it is really just an excuse to disenfranchise minority voters. And, some suggest, racism is at the root of this movement.

Claims of racism are so common these days, and are an automatic response to so many things, that the term is now just one more meaningless buzzword, and that demeans true instances of racism.

Unhappy with the photo ID requirement, Georgia Democrat Congressman John Lewis, also on MSNBC, said this about voting: “To be able to cast a vote should be very simple, like getting a glass of fresh water.”

Yes, Mr. Lewis, it should be, for every legal voter who has the proper credentials.

However, the fact is that many state election systems lack integrity and are simply a mess.

An analysis by the Pew Center on the States found that close to 2 million Americans who had died were still on the books as active voters. It also found that nearly 2.75 million people were registered in more than one state, and that 12 million voter records had incorrect addresses or other errors.

There are other election problems, as well. “From voter fraud to election chicanery of all kinds, America teeters on the edge of scandal every November,” according to Dr. Larry Sabato, director of the Center for Politics at the University of Virginia.

Despite efforts to downplay it, there is ample evidence of voter fraud in the country. Remember the ACORN voter registration scandal where Mickey Mouse and Donald Duck turned up on registration forms in Nevada?

We have dead people voting and people voting who claim to be someone whose name is on the voter rolls, but is not who they are, one of the most ridiculous examples of which occurred in Washington, DC, in the shadow of the Justice Department where an undercover reporter recorded himself giving his name as (U.S. Attorney General) Eric Holder and being offered a ballot without showing an ID or being questioned about his identity. 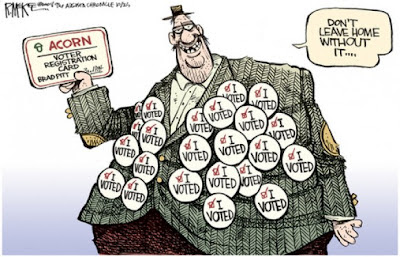 Instead of championing efforts to clean voter rolls of dead people and non-citizens, however, Mr. Holder’s Justice Department has ordered Florida’s elections division to halt a systematic effort to purge the state’s voter rolls of non-citizen voters, and is a vocal opponent of photo ID laws.

And on the topic of voter suppression, the Pittsburgh Post-Gazette reported those concerns are not supported by the facts: "In Georgia, black voter turnout for the midterm election in 2006 was 42.9 percent. After Georgia passed a photo ID law, black turnout in the 2010 midterm rose to 50.4 percent,” an increase of more than 17 percent. “Black turnout also rose in Indiana and Mississippi after photo IDs were required," the newspaper reported.

Also, according to the National Conference of State Legislatures, some states allow voters without ID to vote if they sign an affidavit affirming under penalty of perjury that they are the person they claim to be. And, most states allow provisional balloting so that no one would be turned away from the polls by election officials for lack of a photo ID.

If it is true that photo IDs are difficult for some voters to obtain, groups that help people register to vote can simply adapt their service to help voters acquire photo IDs, and ACORN, or whatever it now calls itself, can substitute this service for creating fraudulent voter registrations.

Complaints that photo ID requirements are efforts to disenfranchise minorities appear to be so much election year hot air, and may be aimed at blocking efforts to get unqualified voters off voter rolls.

Every honest, freedom-loving American should insist upon a system that allows only legal, registered voters to vote. Nothing less is acceptable.

Side note: A photo ID will be required to enter the 2012 Democratic National Convention this September in Charlotte. Wonder if Eric Holder will oppose that?

wow Smokey... I thought you were against government regulation....

That was one excellent article! You have provided ample evidence as to why we must have Voter ID. What I see in the the left, when this subject is at hand, is a little twinkle in their eyes and a smirk on their faces. They know exactly what they are doing and they don't care.

Thanks, glad you agree (not that I would expect you to disagree).