All pain and no gain: Manic regulation kills jobs, produces no benefits 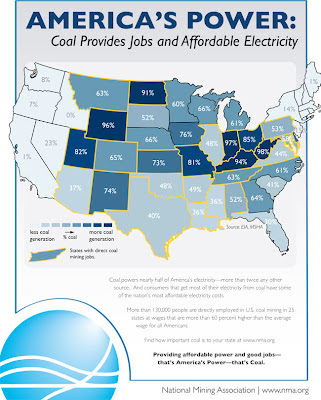 In March of this year the federal Energy Information Administration (EIA) released data showing that in 2011 coal was responsible for 42 percent of U.S. power production, a little lower than years past, but coal still is the most commonly used fuel in producing domestic electricity.

Burning coal is dirty, but it is cleaner today than any time in the last 60  years. And mining coal is risky for workers, but so is commercial fishing, logging, flying airplanes, and farming/ranching, the four most dangerous occupations in the country. Yes, coal has its negatives, but so does every one of the energy sources suggested to replace it.

On the plus side, coal not only produces energy, it produces direct and indirect employment for hundreds of thousands of Americans, and billions in tax revenue from its production and sale, and from the income of industry businesses and workers.

Coal generates electricity in 48 states and is mined in 25 states. According to the National Mining Association (NMA) U.S. coal mining directly employs nearly 136,000 people, and the average coal miner earns $73,000 per year. For each coal mining job, an additional 3.5 jobs are created elsewhere in the economy. For example, 60,000 people work in coal-fired power plants, and thousands more work in the transportation industry delivering coal to customers. The NMA estimates that 50,000 new employees will be needed in coal mining over the next 10 years to meet demand and to replace retiring workers. And, coal is projected to be the dominant fuel for electricity generation in the U.S. through 2035, according to the EIA.

This information ought to be seriously considered when the vast army of government regulators is hard at work making life more expensive, but not necessarily better. It was clearly ignored when the Environmental Protection Agency developed the Utility MACT Rule, which establishes the maximum achievable control technology (MACT) standards for emissions of hazardous air pollutants from coal- and oil-fired power plants. Primarily, Utility MACT targets mercury emissions.

You remember mercury. It’s the poison contained in every one of the new miracle light bulbs, called CFLs, which Congress mandated to replace the popular, inexpensive and safe incandescent bulbs we have used for decades. It is also released by coal combustion and the EPA fears it will settle into water supplies and cause birth defects when consumed by pregnant women.

The National Center for Policy Analysis (NCPA) recently commented on a study by the Competitive Enterprise Institute that disputes the EPA’s data. “The EPA's December 2000 determination that triggered the rule assumed that 7 percent of pregnant women in the United States have blood mercury concentrations exceeding the agency's reference dose. In reality, only 0.4 percent (one in every 250 pregnant women) had blood mercury levels exceeding the reference dose.”

The report also says “EPA estimates that each year 240,000 pregnant women in subsistence fishing households eat enough self-caught fish to endanger their children's cognitive or neurological health, yet the agency has yet to identify a single woman who fits this description.”

The EPA justifies implementing this rule by claiming that the public health benefits of limiting coal burning will be greater than the compliance costs. It claims the Rule will save $80 billion a year, but relies on achieving levels of particulate matter discharge well beyond levels generally recognized as safe.

American coal plants are vastly cleaner than those in other countries, where pollution control is virtually non-existent. China now emits more mercury than the United States, India, and Europe combined, and mercury pollution wafts across the Pacific to foul our air and water. The EPA would better serve Americans if it regulated China’s coal burning.

Americans for Prosperity predicts American families and businesses will see electricity bills rise by an average of 12 percent nationwide and by as much as 24 percent in coal country, and this “burdensome regulation” will destroy over a million American jobs in the coming years.

The U.S. Senate had the opportunity last Wednesday to put a halt to this anti-coal, anti-common-sense scheme, but failed by a 53-46 vote.

Incomprehensibly, two coal-state senators, West Virginia Democrat Jay Rockefeller and Tennessee Republican Lamar Alexander, voted against the measure, along with four other Republicans. Clearly, Senators Rockefeller and Alexander have failed their constituents and their states.

The EPA grossly overstated the dangers of mercury from burning fossil fuels and grossly understated the harmful effects of Utility MACT on the public. These folks will not be satisfied until every detectable particle of every substance that at some level of concentration might be harmful to something or someone is eliminated from the Earth, and they are eager to force job losses and higher consumer costs on us trying to achieve that impossible goal.

This kratom sensation rocks! They possess great Kratom sensation are lovely!! The staff is great and the red-colored maeng ford we received was superb. Plus i got my personal product on time. I’ve experienced an incredible five star encounter general and can order again.