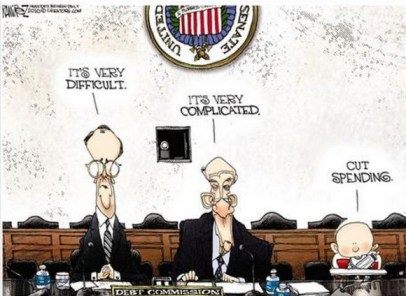 we have to meet in the middle as it is not a one way solution...

The operational idea of the federal government ought to be to be as small and frugal as possible, so as to not be too great a burden on any American or all Americans. That clearly is not the case today, as some Americans have 35 percent of the adjusted income confiscated by the government.

I don't care who you are or how much you earn, or how many or how few people are affected by that tax rate, no American should have a third of their earnings taken from them. That is anathema to the founding concepts of individual liberty and limited government.

Currently, duplicated federal programs cost some $400 billion a year. Don't tell me we need to raise taxes on anyone under such idiotic and intolerable circumstances.

We need to cut spending on duplicated programs, for starters, next, eliminate ineffective programs, and get rid of the inappropriate spending.

There are two tax changes I support:

First, some of the people who now pay no tax can pay something, maybe 5 percent. As many people as possible need to have a stake in what their government does.

Second, when spending is under control we can lower the highest rate to something in the neighborhood of 20 percent.

Better yet, implement a flat tax or a national sales tax and get rid of the income tax altogether.

CK please ask all your friends and family to start sending extra money to the gov't; since you feel that the only way to fix a high spending problem is with more taxes

Somehow, LN, I don't think his family will comply!!

everyone pays the same sales tax rates... and with the mass of people living paycheck to paycheck, it is no wonder taxes revenue is down because there is no money for the middle and lower classes to spend...

at this rate, there will be no money made for the big corporations as the spending power of the typical American is very limited and only getting worse... those with the highest incomes and amount of wealth need to stop hording it all at the top under the guise of being a 'hard worker' or a 'job creator' and put cash back in the pockets of the bulk of americans... you know the people who wait on you at restaurants, and work convenience stores, and pick up your trash and teach your children in school...

What prepares someone to make a “living” wage, or to be financially comfortable, is how well they have prepared themselves to acquire a decent job. That means being educated or trained for those jobs, and having some work experience improves their earning power.

What then enables a well-prepared person to find a decent job is a business climate where businesses are thriving and expanding, and people are able to start new companies. We have no such business climate today.

People who work in restaurants or convenience stores or pick up trash are generally not prepared through education or training for better jobs, although when the business climate is like it is today, jobs at all levels are in short supply, meaning that people often have to work below their expected level. That is another reason to help businesses, instead of punishing them.

High taxes and over-regulation raise the costs of doing business, forcing higher prices for goods and services, making it more expensive for consumers. In such a climate, many businesses cannot expand, and sometimes they must contract, or even close.

I recommend that you read Basic Economics: A Common Sense Guide to the Economy by Thomas Sowell.

That will give you a good grounding in economics and erase the many misconceptions you have. You can get it from Amazon.com for around $10. It will be a great investment.

I dont really support such 'free range' capitalism as Sowell does...

I think some sort of regulation and restrictions are required to protect people...or else businesses will continue to run wild and exploit workers and consumers all in the name of profit...

Sowell is an economist, not a capitalist. His capitalist tendencies arise from his knowledge of economic principles: capitalism is the only economic system that actually works, and still affords individuals the freedom to make their own economic decisions.

I oppose over-regulation, but I've never said there should be no regulation. Even libertarians understand there have to be some broad restrictions.

Currently, there are thousands and thousands of them, and they are counter-productive.

How do businesses exploit consumers, who have the option to not buy a product unless they want it, or workers, who are not forced to take or keep a particular job?