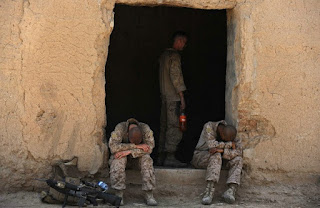 Writing in Foreign Policy, Douglas Wissing presents a picture of the Afghan entanglement that is sharply at odds with the official line out of Washington, coming not only from the politicians, but from military leaders as well.

His account begins: “If observers had any doubts about the failure of the U.S. counterinsurgency strategy in Afghanistan, the past several days should have put them to rest. Since Feb. 21, anti-U.S. protests have erupted in virtually every major Afghan city over the revelation that American personnel had burned Qurans at Bagram Airfield, the largest U.S. installation in the country. The demonstrations have at times turned violent, claiming the lives of at least seven Afghans. This wave of protest is just the latest example of how the United States has botched its attempt to win “hearts and minds” in Afghanistan, and another indicator that its war effort is heading toward failure.”

And then, this: “Lt. Col. Daniel L. Davis has traveled over 9,000 miles across Afghanistan to learn a simple lesson: public statements made from podiums in Washington and Kabul bear little resemblance to the reality of the Afghan war. The 17-year U.S. Army veteran spent most of his time in the insurgency-enflamed provinces in the east and south, and was shaken to discover the U.S. military leadership’s glowing descriptions of progress against the Taliban insurgency did not jibe with the accounts of American soldiers on the front lines of the war.”

A boat is a hole in the water into which you throw large sums of money...

If Afghanistan were surrounded by water, it would be exactly the same...

A hole into which we are throwing vast sums of U.S. tax dollars that WE don't have to spend..

We didn't learn anything from the Russian's experience from '79 to '88.

hell, we armed the taliban against the russians back then and now they shoot us with our own weapons...

same as we did with Saddam under Ronald McReagan...