What happened to the “Land of the Free and the Home of the Brave?" 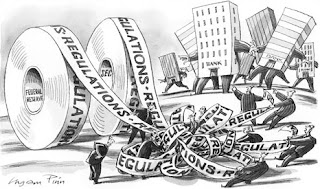 Look at the areas of our lives that the federal government regulates or controls: education, commerce, employment, the environment, transportation, energy, mining, oil and gas drilling, healthcare, banking, immigration (well, not so much) … The list goes on.

At what point is there too much government? Many Americans believe we have long since passed that threshold. The federal government has co-opted Americans from freely deciding many routine things that not so long ago were theirs to decide. The degree of government control is demonstrated by a huge collection of rules and regulations.

Last year’s Federal Register – the daily publication for Rules, Proposed Rules, and Notices of the Federal Government – contained more than 81,000 pages. The Tax Code’s length is nearly 17,000 pages, and the Code of Federal Regulations this year has 165,000 pages.

According to the Weidenbaum Center at Washington University in St. Louis and the Regulatory Studies Center at George Washington University in Washington, D.C., that jointly studied the federal government, agencies spent an estimated $55.4 billion in budgetary expenditures to administer and police the regulatory enterprise in a recent year. Adding the $1.75 trillion in off-budget compliance costs, the total regulatory burden is $1.8 trillion.

“In 1787, there were four federal crimes. Now there are over 4,000,” an article in the American Spectator told readers earlier this year. “In an average year, Congress will pass about 200 bills and agencies will enact over 3,500 regulations,” the article continued. Many of those regulations – written by bureaucrats, not Congress – have the force of law and carry prison terms.

William Anderson of Frostburg State University writes that “The only thing that stands between almost any American and doing a stretch in federal prison is the choice of whom prosecutors will target. This is a serious problem that shows no signs of disappearing. The transformation of federal courts into indictment and conviction machines imperils the U.S. business environment. Entrepreneurs and business owners face enough uncertainty in the current economic climate without having to worry about going to prison because an ambitious federal prosecutor can convince a jury that someone violated a vague, murky law.”

As serious a problem as this is, it is not the most serious threat Americans face at the hands of their government.

Constitutional attorney John W. Whitehead believes we have gone over the edge where policing is concerned. “Among those federal agencies laying claim to their own law enforcement divisions are the State Department, Department of Education, Department of Energy, U.S. Fish and Wildlife Service, and the National Park Service,” to name just a few of the 73 agencies that have Offices of Inspectors General that exercise police powers, frequently using SWAT teams that evoke visions of a police state.

Predictably, overzealous and sometimes poorly trained SWAT teams abuse American citizens without cause, like the California man and his three young children rousted from their home at 6 a.m. by a Department of Education SWAT team looking for information on the man’s estranged wife’s education loan. Yes, that’s right: a SWAT team was sent to break into his home because of an education loan.

Much worse, a young ex-Marine was killed after a SWAT team crashed into his home during a drug raid and opened fire. According to news reports, the father of two young children grabbed a gun in response to the forced invasion but never fired. He was allegedly fired upon 71 times, but police found nothing illegal in his home.

Mistakes are bound to happen, of course, but that raises the question of how many times the federal government should be allowed to abuse or kill innocent citizens with impunity? The answer is: Never!

Mr. Whitehead notes that “Nationwide, SWAT teams have been employed to address an astonishingly trivial array of criminal activity or mere community nuisances: angry dogs, domestic disputes, improper paperwork filed by an orchid farmer, and misdemeanor marijuana possession, to give a brief sampling.” Even worse, he continues, “All too often, botched SWAT team raids have resulted in one tragedy after another for the residents with little consequences for law enforcement” because “judges tend to afford extreme levels of deference to police officers who have mistakenly killed innocent civilians but do not afford similar leniency to civilians who have injured police officers in acts of self-defense.”

How did our government, conceived in ideals of liberty at a cost of the lives of patriots fighting for that liberty, turn into an overbearing mechanism that micro-manages our lives, and even unleashes military-like power against its citizens without accountability?

We have allowed government to grow in size and power, supported by citizens who have been conned into believing that government knows better than they how to do everything, and encouraged by a cadre of Americans who prefer depending on government support to having to fend for themselves. The interests of the people have been trampled by statists and socialists who happily wallow in the power they gain from a huge, domineering government apparatus like pigs in mud.

John Adams was right about a nation with democratic ideals: “It soon wastes, exhausts, and murders itself.”