Broader unemployment numbers paint a grim picture of the “recovery” 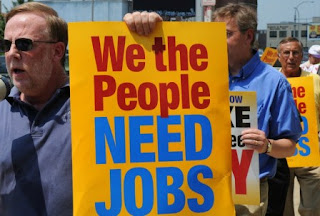 The good thing about our economy is that despite the serious problems it often has, the market will self-stabilize fairly quickly, as history has repeatedly shown. That is, if the politicians have the good sense to remove barriers and leave it otherwise alone.

However, when politicians impede the recovery through bad policies and foolish actions, the result is the Great Depression and, in this case, the Great Recession.

Even though there was slight improvement in the jobless number for December [the U-3 rate], a one-tenth of a percent decline in the unemployment rate to 8.5 percent, the economy is still sputtering.

Unemployment was already headed upward when Barack Obama took office in January of 2009 and rose steadily from 7.6 percent to 10.2 percent in October 2009, ending the year at 10.0 percent. Apparently the gods of the economy didn’t hear the president’s predictions that his nearly $800 billion stimulus would keep unemployment at 8.0 percent or less.

Three years later the unemployment rate is still substantially higher than Mr. Obama’s predicted peak. Plainly, the stimulus failed; a shining example of how the bad judgment of politicians impedes economic recovery. And the liberals running the government failed to learn anything from that mistake.

In politics, however, one takes even the smallest bit of good news and makes the most of it, so it was no surprise when Mr. Obama said, “We’re starting to rebound. … We’re heading in the right direction and we’re not going to let up.” He went on to say that the country has made “steady progress” since he took office, blithely ignoring inconvenient facts clearly demonstrating the contrary.

The good news is that unemployment has fallen from a high of 10.2 percent in October of 2009 to the current 8.5 percent rate, down 1.7 points over that 22-month period, and that is, of course, welcome news.

The unwelcome news, though, is that the unemployment rate rests nearly 3 points above the 1948-2007 average of 5.6 percent. Also, the 8.5 percent number reflects only the people currently active in the job market, and ignores the misfortunes of those who are underemployed or who have become discouraged and stopped looking for a job. An accurate picture of unemployment cannot ignore those Americans, as the U-3 rate does.

The Bureau of Labor Statistics (BLS) is the official source for unemployment data and in addition to the number of people reported as unemployed reflected in the U-3 rate, it also reports the U-6 rate that includes the underemployed and those who have given up. The U-6 rate stood at 8.8 percent in December 2007, stood at more than 15 percent in January 2009 when Mr. Obama took office, rose to a high of 17.4 percent in October 2009, and was at 15.2 percent at the end of December 2011.

Acknowledging the true unemployment picture reflected by the U-6 rate, it is difficult to make a case that things have gotten noticeably better than they were when Mr. Obama took office.

Worse still, using the methodology for computing the unemployment rate used during the Great Depression and up until 1994, the current unemployment rate is around 23 percent. Essentially, the only reason the Obama economy looks even marginally decent is that the BLS changed the way it calculates unemployment.

Having frequently taken credit for a recovery, however, Mr. Obama is now obliged to take responsibility for everything that occurs after the recovery began, such as the news on median household income.

Despite these discouraging numbers, the president and his fellow Washington liberals continue policies based upon bad judgment. Mr. Obama tried to stimulate the economy by throwing nearly $800 billion at it. It didn’t work. He tried to stimulate green energy alternatives by throwing a half-billion dollars at Solyndra. That failed miserably. He tried to help the lower income folks by cutting their contribution to Social Security, which put a few extra dollars in their pocket each payday, but also increased the Social Security program’s deficit, and now he wants to extend that reduction.

And, last year he increased the size and cost of government yet again by creating the Consumer Financial Protection Bureau, which will further impede business operations and raise costs by arming yet another band of bureaucrats with investigative power, and giving them loose standards to use in deciding who and when to investigate.

What the government ought to be doing instead is improving conditions that foster employment, and that means restoring certainty about the future in the minds of businesses and consumers. The “more regulations and laws” mentality of liberal Washington Democrats is the opposite of that prescription, and will further delay the recovery.