Dismantling the Constitution:
the 4th Amendment is under attack 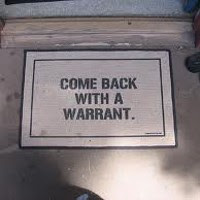 As the delegates to the Constitutional Convention wrangled over the precise form of the document for governing their new nation some delegates refused to sign a draft because it did not include a bill of rights, a feature typical of the constitutions of the several states. Those delegates wanted there to be no question that certain rights were to be honored by the federal government, and this issue was so important to the Anti-Federalists that they used the absence of a bill of rights as reason enough to not ratify the Constitution. Eventually, it was agreed to include a Bill of Rights comprised of 10 amendments in the Constitution of the United States of America.

Of the 10 rights considered important enough to be specifically guaranteed, the 4th Amendment states: “The right of the people to be secure in their persons, houses, papers, and effects, against unreasonable searches and seizures, shall not be violated, and no Warrants shall issue, but upon probable cause, supported by Oath or affirmation, and particularly describing the place to be searched, and the persons or things to be seized.”

Go back and read that statement carefully.

The 4th Amendment is about as plain a statement of the sanctity of one’s home, person and personal property as can be made, and it states as clearly as it can be stated that strict procedures must be followed in order to suspend the right of citizens to be free of government intrusion, even when there is legitimate suspicion that a crime may have been committed.

So, how do we explain educated people, trained in the law, and presumably fluent in the King’s English, failing to understand this simple, straightforward, and unambiguous statement – a forthright guarantee of the personal right to privacy – except when strict standards are met to justify suspending that right?

One body that should be held to account is the Indiana Supreme Court, whose majority in one case stated that “[we] hold that there is no right to reasonably resist unlawful entry by police officers.”

Another body to be held to account is the Supreme Court of the United States, whose failure to obey the clear language of our Constitution was reported by the Los Angeles Times: “The Supreme Court … gave police more leeway to break into residences in search of illegal drugs. The justices in an 8-1 decision said officers who loudly knock on a door and then hear sounds suggesting evidence is being destroyed may break down the door and enter without a search warrant.” The ruling came in an appeal of a Kentucky case in which the state Supreme Court overturned a lower court’s conviction of a man whose apartment police broke into in the manner described.

Justice Samuel Alito wrote that people who "attempt to destroy evidence have only themselves to blame," when police break down their door. But the lone dissenter, Justice Ruth Bader Ginsburg, wrote that “police officers may not knock, listen and then break the door down.” That violates the 4th Amendment, she correctly noted.


The judicially conservative Justice Alito and the judicially liberal Justice Ginsburg have switched places on this issue.

Justice Alito’s comment begs the question, “just what does evidence being destroyed sound like through a closed door?” After knocking on the door the police hear a toilet flush. “Uh-oh,” one of them says, “someone is destroying evidence,” and they break the door down. Leaving aside the issue of how likely it is that someone at the front door could hear a toilet flush inside a residence, what if someone inside was merely using the bathroom?

Under this ultra-liberal standard police conceivably could go to any residence for any reason, or for no reason in particular, knock on the door, then break it down because they “thought” evidence was being destroyed. That is precisely what the 4th Amendment is intended to prevent.

Remember, just because the police knock on your door, you are not obligated to open it, or let them in. It’s your residence; you decide who to let in, as Justice Alito himself stated before he forgot that we have a 4th Amendment: "When law enforcement officers who are not armed with a warrant knock on a door, they [may] do no more than any private citizen may do." Thus, if a private citizen breaks down the door, the resident would be justified in using necessary force in defending himself from an intruder who has no authority to enter the premises.

If there is probable cause to believe there are illegal drugs in a residence, police must take the time and follow procedures to get a warrant. Catching every drug dealer at every single opportunity is not more important than the right of the people to be free from government tyranny and over-zealous police.

Justice Ginsburg, apparently the only justice in command of good sense, said the court's approach "arms the police with a way routinely to dishonor the 4th Amendment's warrant requirement in drug cases.”

The 4th Amendment is what separates the United States from tyrannical police states. Someone should remind our judges of that crucial fact.