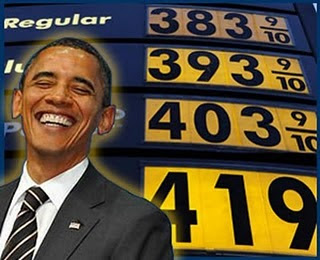 As President, Barack Obama has shown the occasional capacity to recognize good policies when he sees them.

As a candidate for president, Mr. Obama continuously condemned George W. Bush for the Guantanamo Bay enemy combatant facility, for enhanced interrogation techniques, rendition, black site interrogation facilities, virtually everything else the nation was doing in the “War on Terror,” and also for the wars in Iraq and Afghanistan. That technique played well with voters and helped him win the election.

But as president he learned that things look different from inside the Oval Office than from outside on the campaign trail, and he used and benefitted from those same anti-terrorism policies he so bitterly criticized in finding and disposing of Osama bin Laden.

If he can recognize and utilize successful policies in the areas of war and terrorism, he ought to be able to also do so in other important areas, such as economic policy and energy policy, particularly when the two are so critically important and so inextricably linked. And surely he understands that an unemployment rate above 7.0 percent, two full points below where it stands today, will sink his re-election in 2012.

Yes, the election is 19 months away, an eternity in politics, and a lot can happen. But none of the president’s leftist/socialist efforts to turn the economy around has accomplished much, and he shows no signs of getting government out of the way so that the economy can fix itself, as it has always done when government stays out of the way.

The White House keeps publicizing the number of jobs created each month, but notice that the unemployment rate has been above 8.0 percent since Mr. Obama took office, as high as 10.1, and it rose again to 9.0 in April. The more important number is the U-6, which includes those who are unemployed, underemployed, and who have given up looking for work. That number is 16.6 percent.

Creating jobs is obviously important, but maintaining existing jobs is just as important, and the Obama policies have failed spectacularly in that regard. We’re told of the thousands of new jobs created each month, but the unemployment rate is still 80 percent above normal levels. Unemployment rates were below 6.0 percent every year but one from 1995 through 2008.

Tim Cavanaugh notes on Reason.com that “less than a year after the trough of the 1958 recession, the economy had reversed an unemployment spike of more than four percentage points,” and “in 1981-1982, job growth more than erased a 3.1 percentage point increase in unemployment within 11 months, leaving the rate lower than it was before the recession.” The Obama solutions are not working.

Furthermore, the Obama administration’s moratorium on offshore drilling is not only keeping thousands of American oil industry workers on the unemployment rolls; it also deprives governments of needed revenue, and that problem will grow unless new drilling leases in the Gulf of Mexico are sold this year and drilling resumes.

After the Deepwater Horizon explosion in the Gulf last spring, the Obama administration issued a moratorium on all drilling, suspending 33 separate projects in various stages of development, halting new lease sales and suspending permitting on existing leases, producing a decline of an estimated 240,000 barrels a day in oil production in the Gulf this year, according to the U.S. Energy Information Administration. The Heritage Foundation’s Rob Bluey estimates that this loss of royalties, lease bids, and taxes “represents billions of dollars in potential revenue that could help close the federal deficit.”

Mr. Obama lifted the moratorium last October, but since then virtually nothing has changed; oil companies are faced with a deliberate slowing of the permitting process. This year could be the first since 1965 that the federal government did not sell leases in the Gulf.

Policy over-reactions like the drilling ban impede the recovery and keep unemployment high. This one also reduces the world-wide supply of oil.

We would not put an adolescent into any position of responsibility, but that is precisely what Mr. Obama is attempting to do with regard to his green energy vision.

If the president can understand how sensible and effective the anti-terror policies of George W. Bush are, he ought to be able to understand that “green” technologies will be naturally and enthusiastically accepted when they are practical and make economic sense.