Just when you think you’ve heard
the craziest comments ever … 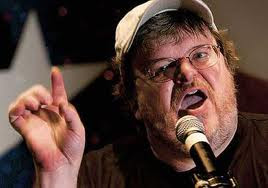 Speaking to public sector workers in Madison, Wisconsin last week liberal film maker Michael Moore made this statement: “America is not broke. Not by a long shot. The country is awash in wealth and cash.”

Michael Moore is an interesting study in contradiction. He’s made a career of trashing his country, and made a fortune doing so under the same capitalistic economic system he so bitterly criticizes and tries so hard to discredit. Question: Does a successful capitalist have any credibility at all trashing capitalism?

Normally, no, but that doesn’t stop Mr. Moore, who is upset that the country’s wealth and cash is controlled by those to whom it belongs. He believes that all money, assets, and resources should belong to the government, and that it should be run by liberal elites, who know better than everyone else how things should be done.

However, even those who suffer grand delusions like Michael Moore stumble into a truth once in a while. After about two minutes of fantasizing, he said something that is absolutely true: “I have nothing more than a high school degree,” he said. “But back when I was in school, every student had to take one semester of economics in order to graduate. And here's what I learned: Money doesn't grow on trees. It grows when we make things.”

Aside from the incorrect assertion that completing high school gives one a degree, he is correct about one thing: in this country people who make things, design things, sell things, fix things and indulge in other productive activities earn money for their work and use that money to buy things they need and want. It’s the American way, and Michael Moore is a pretty good example of how an individual can succeed in the capitalistic economy of the US by providing people something that they want.

However, after stating that one economic truth, he veered away from sound economic theory into a diatribe that might have been written by Karl Marx, Vladimir Lenin or Fidel Castro. Maybe another semester or two of economics would have helped.

Mr. Moore’s ideas are fundamentally un-American. Not only does he believe that the money Americans earn by going to work every day ought to belong to government, not to the individual that earned it, but he also believes that if the government actually did control all the wealth in America, we could spend as much as we want to and our $3.7 trillion budget really wouldn’t be a problem, because the country has the assets to cover it.

Clearly, contrary to what he told the government workers in Madison, Michael Moore really does believe money grows on trees.

But some have their feet on the ground. On his Website, “iowahawke,” David Burge dissects the US economy in an article titled “Feed Your Family on $10 Billion a Day,” which is roughly what you get when you divide our $3.7 trillion budget by 365 days a year.

Mr. Burge looks into the economy to find enough wealth and cash to pay for the insane level of spending in modern budgets. He immediately takes the profits of the two largest corporations in the United States, ExxonMobile and Wal-Mart, $34 billion, which doesn’t go very far. He then takes the profits from the other 498 companies of the Fortune 500, adding another $357 billion, which together with the previously confiscated $34 billion is enough money to get us all the way to … 2:00 a.m. on February 9th.

Continuing through the year, he confiscates billions more from such sources as Star Wars movies and products, professional athletes and sporting events, funding for the Iraq and Afghanistan wars, foreign aid payments, billionaires and everyone else making $250,000 a year or more. After confiscating all of the profits, salaries and assets … all of the wealth in America, he manages to find enough money to cover all the spending by midnight on December 31st.

Ah, but then we come to 2012, when President Barack Obama proposes to spend another $3.6 trillion, and all the wealth and cash that could offset that gargantuan fiscal irresponsibility has already been confiscated by the government and used to pay for last year’s spending; it no longer exists. We are broke.

Michael Moore is among those who truly believe the earnings of all who participate in the capitalistic economic system of the United States should belong to the government. Fine. They need to become good role models and show us the way by turning over their wealth to the Treasury Department where they believe it rightfully belongs. Put up, or shut up.

Neither of those things is likely to occur, of course, because as is so readily evident, folks like Michael Moore think that they are not only smarter than everyone else, but also think they don’t have to play by the same rules they expect everyone else to play by. And they will never stop telling the rest of us that they know better than we how we should live our lives.