The State of the Union:
President Obama hasn’t learned anything 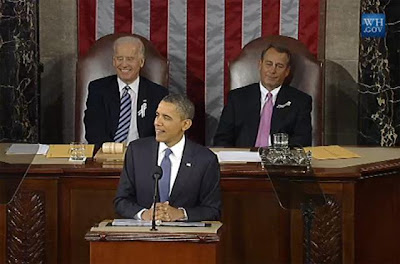 For a long, long time the State of the Union address has been anything but a mechanism for communicating useful information about the state of the nation to the Congress, but despite the overwhelmingly political atmosphere that dominates this annual spectacle, President Barack Obama was able to send an important message.

The president noted in his address that America does “big things,” and who could argue with that? “America is the nation that built the transcontinental railroad, brought electricity to rural communities, constructed the Interstate Highway System,” he said.

“We’re a nation that says, ‘I might not have a lot of money, but I have this great idea for a new company.’ … From the earliest days of our founding, America has been the story of ordinary people who dare to dream. That’s how we win the future,” and “the first step in winning the future is encouraging American innovation. None of us can predict with certainty what the next big industry will be or where the new jobs will come from. Thirty years ago, we couldn’t know that something called the Internet would lead to an economic revolution.”

He continued: “What we can do – what America does better than anyone else – is spark the creativity and imagination of our people. We’re the nation that put cars in driveways and computers in offices; the nation of Edison and the Wright brothers; of Google and Facebook. In America, innovation doesn’t just change our lives. It is how we make our living.”

That’s all true; America is all of those things. But what followed clearly sent the message that Barack Obama does not understand how the country he was elected to lead was able to achieve such great things.

He believes that the government should “invest” your tax money in research, and that doing so will produce results that research funded by private sources will not, or cannot produce; that without government funded research the “correct” things will not happen.

Now, it is true that government funding was involved in significant advances and discoveries. But is it true that these things would not have been developed without “government investment?” Is the president suggesting that the same innovative energy that caused Edison to produce the best incandescent light bulb exists only because the government invests in research? Well, not in Edison’s case, nor in the case of thousands of other research triumphs.

“Our free enterprise system is what drives innovation,” he correctly noted. “But because it’s not always profitable for companies to invest in basic research, throughout our history, our government has provided cutting-edge scientists and inventors with the support that they need,” and he proceeded to suggest that without government funding the Internet, NASA’s man on the moon project, computer chips and GPS would not exist today.

But the president is mistaken.

The government has not funded scientific research “throughout our history,” and the idea that government must fund scientific research is a big myth, according to Terence Kealey, professor of clinical biochemistry at the University of Cambridge, England, and author of The Economic Laws of Scientific Research, in an article for the Cato Institute in 1997. “The argument is that private companies will not fund science, especially pure science, for fear that their competitors will ‘capture’ the fruits of that investment. Yet, in practice, companies fund pure science very generously,” Professor Kealey wrote. “The more a firm invested in basic science, the more its productivity grew,” he said, citing research conducted by University of Pennsylvania economist Edwin Mansfield.

He went on to explain that “if a company is sited in a country that has low taxes, it simply invests its own money; if it lies in a country with high taxes, it lobbies its government to fund its R&D,” concluding that high taxation interferes in the normal economics of funding scientific research, and that “government funding displaces private research money.”

When government directly funds research, those projects and areas preferred by government receive funding. But government should not determine what or who gets funding; that isn’t what made America great. The funding of science should be economically, not politically, determined.

What Mr. Obama calls “investment” is just “government spending,” and even if its purpose is good and valuable, it is still “government spending.” Our government has amassed a $14 trillion national debt and a budget deficit this year of $1.4 trillion. That is the problem we have to solve, and more spending is obviously not the solution to that problem.

“We need to take responsibility for our deficit and reform our government,” the president declared. But his plan does not reduce the budget deficit; it merely substitutes some deficit spending with other deficit spending.

The fact is that government didn’t build America. The American people built this great nation through a mostly-free-market capitalist system.

In Mr. Obama’s narrow view, the only way to solve any problem is with a government solution. Government has an important role to play, but that role isn’t to make all our decisions for us; it is to assure the individual liberty and the market freedoms that built the nation.

Statists like Barack Obama seem incapable of understanding that.