Obama has a good jump shot,
but he should have played football 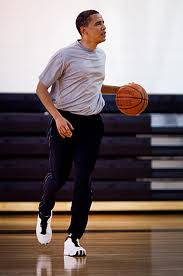 President Barack Obama is generally considered to be a good basketball player, but he might have chosen football, instead, because in the two years as our president he has shown us that he is a world class punter.

After being sworn in the American people were suffering from high unemployment and expecting government to focus on how to help businesses create jobs, he punted on that one, preferring to focus on health care reform, instead.

He energetically advocated for dramatic changes to the health care delivery system and the health insurance industry, but Mr. Obama punted on that one, too, and turned over the responsibility for drafting the legislation to Congress, with disastrous results.

When the 111th Congress failed to pass a budget last year, he again punted, and instead of cajoling the Congress into doing its Constitutional duty, he sat on his hands.

Now the president has punted on his duty to formulate a sensible and responsible federal budget, submitting something that, considering the dire fiscal circumstances we are in, is not a serious effort, and submitting it a week late, to boot.

Facing yet another breech of the legal barrier for the national debt because of continued irresponsible spending levels; a $14 trillion national debt, made larger by deficits of $1.4 trillion in 2009, $1.3 trillion in 2010, and another $1.65 trillion dollar deficit this fiscal year; and after saying that we need to be more fiscally responsible, the president submitted a fiscal 2012 budget of $3.7 trillion with yet another $1.5 trillion deficit to add to the national debt, a budget that spends 40 percent more than the country takes in.

This is what passes for responsible leadership? A budget that is larger than the total debt accumulated by the federal government from 1789 to January 20, 2009? This move was so bad that even The Washington Post panned it.

Mr. Obama repeatedly talked about “winning the future” during the State of the Union speech, but he has already given up on “winning” the future. Instead, he plans to “buy” it, with dollars borrowed from China or whatever country may still be interested in funding our profligacy.

But you heard that the Obama's budget reduces the deficit by $1.1 trillion over 10 years, you say, and that sounds responsible, sort of. True, that there’s still a deficit remaining after that reduction, and it’s also true that it doesn’t address the deficits in future years. But, hey, it’s a start. Sort of.

Even if the plan would reduce the deficit as advertised, it is not nearly aggressive enough. But, alas, this feature is just smoke and mirrors. Mr. Obama is not actually reducing the 2012 deficit by $1.1 trillion; he’s just going to borrow $1.1 trillion less than he would have under earlier projections.

To Mr. Obama, the budget process is a game. What he hopes will happen is that in the absence of a responsible budget proposal from him that attempts to get spending under control, the Republicans will propose spending cuts in an effort to get the nation’s fiscal house in order, and then he and the Democrats can demagogue Republican efforts at fiscal responsibility and use to their advantage to paint Republicans as mean and nasty and don’t care about the people.

When it’s fourth and long, a good punter is a real asset. But when your country is facing financial disaster, punting doesn’t cut it, especially when it’s only second down.

Not only did Mr. Obama fail to make an honest effort to submit a budget that addresses his country’s enormous fiscal problems by reducing spending significantly, but he keeps talking about spending more on some things, like education, which would see a $13 billion increase in spending from the 2010 budget.

He also wants to bring high-speed rail access to 80 percent of Americans within 25 years, and sets aside $148 billion for research and development, including $32 billion for biomedical research, and doubles the amount spent on research on energy efficiency.

To paraphrase Strother Martin’s character the Captain in “Cool Hand Luke,” "What we've got here is...failure of leadership."

The United States has not had a void of competence in the White House this serious since much further back than Jimmy Carter.

BHO – Barack Hoover Obama – is on track to go down as our worst leader.