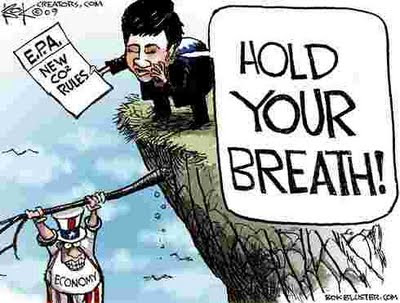 Just when you think it can’t get worse, it does. The Environmental Protection Agency has been the bane of business for years, imposing burdensome regulations in its over-zealous effort to clean up America’s air and water, whether they’re really that dirty or not.

In our last look at this bureaucratic nightmare it was going to regulate dust, believing there was still too much particulate matter in the air, having already addressed the issue of “soot,” which is particulate matter than isn’t dust, and is actually harmful in large amounts.

But dust doesn’t result from burning coal or oil, or even burning wood; it results when the wind blows over bare, dry soil.

Having run out of real environmental boogey men to attack (can we still say “attack” without being accused of inciting violence?) the EPA is now worried about spilled milk.

No, this is not an April fool’s joke; as absurd as it sounds, it is absolutely true that the EPA is worried about spilled milk.

You see, milk contains oil, and oil is almost as big a threat to our survival as coal. This oil is a non-petroleum oil commonly known as “animal fat,” and the EPA is having a cow over the possibility that a large milk spill poses a serious threat to health, and that possibility has driven the EPA to the brink of insanity, which, come to think of it, is more a chip shot than a drive.

The agency thus believes that farmers and milk producers must be held to the same regulations as those for oil drillers and the Exxon Valdez that produce real oil spills. The agency plans to require them to file “emergency management” plans, and build “containment facilities” to hold back what would otherwise be a torrent of spilled milk, and explain how they will train the “first responders” who will clean up the spilled milk. (It isn’t true that the EPA is training a humongous army of cats as first responders.)

But seriously, folks, this is no lapping, er, uh, laughing matter. If some careless farmer or milk producer spilled 1,000 gallons of milk, the surrounding country-side would be awash in as much as 40 gallons of animal fat, and you can imagine the environmental cataclysm that would result if the EPA did not require emergency management plans, containment facilities and first responders to deal with the spilled milk.

Would anyone like to hazard a guess at how much this is going to increase the price of milk and everything that has milk as an ingredient? Obviously, the EPA hasn’t thought about that, and probably doesn’t care.

Clearly, the EPA is out of control.

Four years after Arch Coal went through a rigorous and expensive process to obtain a surface mining permit from the Army Corps of Engineers, the EPA retracted the permit based upon “new water quality standards.” The decision, only the second of its kind in history, cost 220 miners their jobs, and Arch Coal has lost $250 million in future investment. The National Mining Association said the new standards could put at risk the jobs of many of the 27,000 people employed at surface coal mines in Appalachian states. An additional 79 Appalachian coal mine permit applications are now the subject of EPA scrutiny.

Where water quality is concerned, the EPA is again over-reaching. It has set 500 microSiemens (µS) per centimeter as the threshold for water purity; water with greater than 500 µS is contaminated, according to the EPA. But Evian bottled water has 558 µS; Perrier has 712; apple juice has 1,919; and Gatorade has 2,580. By EPA standards, these products are not safe to drink.

So the EPA wants to regulate dust and spilled milk, but it also regulates carbon dioxide, a gas exhaled by humans and animals that many people believe enables trees and vegetables to live. So breathing is also a target (Oops! Make that, “focus.”) of the EPA. Today's higher concentrations of CO2 are the "unambiguous result of human emissions,” the EPA proclaims. Perhaps we should all just go live in caves, or better yet, just die, so the planet can be saved.

However, rumor has it that the EPA has realized that the vast majority of so-called greenhouse gases that supposedly cause global warming – or global cooling, or climate change, or whatever they are calling it now – does not come from selfish Americans burning too many fossil fuels and breathing too much, but from other countries like China and India, and from natural sources, like volcanoes. A double-super-secret source inside the EPA leaked the news that in order to save the planet the agency will shortly ban volcanoes, India and China, the latter of which will certainly help our national debt situation.

Watching the EPA lately is sort of like watching a guy walking and reading a newspaper run into a telephone pole; you want to laugh at his stupidity. But we can’t really laugh at this stuff because it has dire implications for our survival.

Like the crazy uncle living in the attic, Americans are just going to have to ignore the EPA’s goofiness and go on with life.