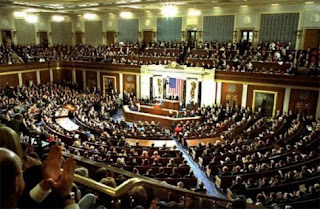 The year 2011 begins with control of the federal government divided. Democrats still control the White House and the Senate, albeit with a narrower 51-47 majority, but Republicans now control of the House of Representatives, 242-193.

As the 112th Congress got underway outgoing House Speaker Nancy Pelosi was gracious in her final comments, if long-winded and hallucinatory in reviewing her speakership. "Deficit reduction has been a high priority for us. It is our mantra, pay-as-you-go," she declared, not mentioning that during her four-year reign the House added $1 trillion to the federal debt each year.

Such irresponsible spending can’t be sustained, and Republicans must keep their pledge to fix that problem.

The Republican plan to read the United States Constitution aloud to the entire House drew surprisingly harsh criticism from Democrats, one of whom accused Republicans of “worshiping” the founding document and treating it like a “sacred text.”

Others grumbled that the roughly ninety minutes it took to read the document was a terrible waste of time, and still others complained that the version to be read was the amended version, as if reading the original un-amended document was more appropriate than reading the form that lawmakers have sworn to honor, defend and obey.

A cynic might say that given the abysmal performance of Congress, especially over the last four years, House members might benefit from having the governing document read to them. The same cynic might also suggest that for many it is their first exposure to the Constitution.

Evidence of a lack of familiarity with constitutional limits on government authority abounds, but perhaps none is more prominent, or a better example of irresponsible lawmaking than the 2,300-page healthcare reform bill, the passage of which the public strongly opposed, to no avail. The House now must vote to repeal it.

However, supporters of the bill say “don’t waste time trying to repeal the health care bill. The Senate won’t support repeal, and if it did, the president will veto it, and Congress won’t be able to override the veto. Spend time on more important things.”

That is a perspective many agree with, but it is exactly wrong. Republicans must push to repeal health care reform, even if it ultimately fails, for several reasons:

• There is a principle favoring limited, constitutional government involved
• The reform law as passed is disastrous
• Repeal was an important issue for many of them in the election
• Their credibility depends upon it

But also consider that the election changed the balance in the Senate and some Senators who formerly supported the bill and are up for re-election in 2012 may actually have learned something about public sentiment of health care reform last November, and may have changed their mind on this issue, or simply don’t want to lose the next election because of it.

So, Republicans must bring it to a vote in the House, forcing members to take a public position on the issue, and let the chips fall where they may.

“But repealing the law will add $145 billion to the deficit,” supporters claim, and a Congressional Budget Office (CBO) report supports that claim. However, the CBO had to use numbers Democrat authors of the bill provided, which is an exercise in voodoo economics.

CBO Director Doug Elmendorf explains that “CBO’s cost estimate noted that the legislation maintains and puts into effect a number of policies [such as arbitrary reductions in the growth rate for Medicare] that might be difficult to sustain over a long period of time.” They also omitted from the scenario they gave the CBO the Medicare “doc fix” cost of about $14 billion in the first year alone, and who knows how much in later years. And the Democrat’s scenario includes 10 years of collecting higher taxes, but only six years of paying the bills.

And if the reform law is such a great thing, why have waivers exempting 222 companies and unions covering 1,507,418 people from insurance provisions in the bill been granted? Why are health insurance premiums rising, not falling? And why are more than 20 different states fighting implementation of the law?

Health care reform imposes a plethora of tax increases, fees and penalties, and according to a July report produced by the Congressional Research Service will create dozens of new federal bureaucracies: “the exact number of new organizations and advisory bodies that will ultimately be created … is currently unknowable.” A description of those the report specifically discussed took 22 of the 42 pages, and includes such things as: “Office of Women’s Health” in five different agencies; the “Negotiated Rulemaking Committee”; the “Personal Care Attendants Workforce Advisory Panel”; and the “Patient-Centered Outcomes Research Institute.”

The public knows reform is big government excess that accomplishes a tiny bit of good, and a great deal of bad. Our elected representatives must now obey the wishes of the majority of Americans: repeal the gargantuan, overreaching reform bill and start over fixing the world’s best health care system by implementing a few sensible improvements, one at a time, in individual pieces of legislation, as the bill’s opponents suggested two years ago.