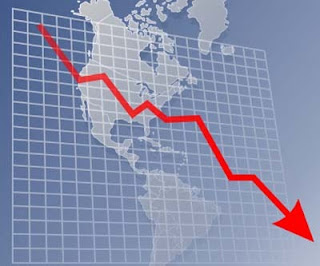 The US economy continues to languish, despite an occasional bit of good news and as much positive spin as the Obama administration can generate without sounding completely unbelievable.

The latest piece of good news is that the unemployment rate dropped from 9.8 percent to 9.4 percent; good news, yes, but not as good as it seems on the surface. A four-tenths-percent drop represents a decline of about 4 percent, but clouding that marginally good news is that the decline would be smaller were it not for the number of people who have become discouraged at being unable to find a job, and are no longer counted in the workforce.

You may remember that President Barack Obama justified the wildly unsuccessful $787 billion economic stimulus bill, signed just a couple of weeks after he took office in 2009, by saying that it was needed to prevent unemployment from rising above 8.0 percent.

The unemployment rate rose fairly steadily to more than 10 percent in late 2009, and was substantially above 9.0 percent through 2010 until December’s 9.4 percent rate. Unemployment has been higher than 8.0 percent during all but the first month of Mr. Obama’s tenure in the White House. The last time unemployment was at the 5.0 percent full employment level was January 2008.

The anemic job production figure of 103,000 is disappointing because most experts expected the number would be 150,000, according to a Bloomberg News survey. But even that number is well below the 200,000 to 250,000 new jobs needed each month to move the unemployment rate lower.

What the administration and the Congress have produced over the last two years includes the following:
• Only 64.3 percent of the civilian labor force has a job, the lowest level in a quarter century
• Approximately 15 million Americans are out of work
• Nearly 9 million workers are involuntarily working less than full-time
• The number of workers who are discouraged and have given up trying to find a job is 1.3 million, up 389,000 from last year

Federal Reserve Chairman Ben Bernanke, testifying before the Senate after the jobs report came out, said it might take five years for the labor market to completely normalize. That’s not acceptable, and it’s not necessary.

For the labor market to normalize we must have policies that reflect an understanding of how business works and that encourage businesses to expand and create jobs, and that requires a president and a majority of members of each house of Congress that understand basic economics, and are more concerned with allowing the private sector to function than with implementing ideological goals that frustrate private sector activity.

The formula for a vibrant economy isn’t a difficult one, however. All one has to do to find it is look back over recent history, as the Cato Institute did. The episodes of highest annual growth in GDP in the last 30 years came between 1983 and 1989, and between 1997 and 2000, and the circumstances that produced those results were a combination of lower government spending as a percent of GDP and lower marginal tax rates.

In the period 1983 to 1989 government spending dropped by 2.4 percent of GDP and tax rates for the highest earners dropped from 70 percent to 28 percent, producing growth in GDP at an average rate of 4.31 percent.

But the greatest average growth of GDP occurred from 1997 to 2000 when government spending dropped by 2.0 percent of GDP and marginal tax rates dropped to 21 percent from 29 percent. That produced average GDP growth for the period of 4.45 percent.

By contrast, in the 2nd quarter of fiscal year 2009-2010, the average GDP growth was 0.23 percent and the circumstances were that spending increased by 4.0 percent as a percent of GDP with a top tax rate of 35 percent, and talk of raising it to 39.6 percent.

High taxation and uncontrolled spending are the problem, according to Brian Riedl, lead budget analyst at the Heritage Foundation. In early December before extending the Bush tax cuts for all taxpayers had been implemented, Mr. Reidl wrote an economic analysis based on the National Commission on Fiscal Responsibility and Reform’s report. “Over the next decade, runaway spending is set to double the national debt, which would risk higher interest rates, slower growth, and steeply higher tax rates,” he wrote.

The last two years demonstrate rather dramatically the failure of Keynesian economic theory that has held sway in Washington. Now it’s time to try something else.

As shown above, during the periods from 1983 to 1989 and from 1997 to 2000, reduced government spending and lower tax rates produce economic expansion, and economic expansion produces jobs. Those are the policies we must now follow.