America cannot survive its weak will
and compulsive spending 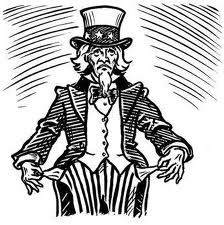 It ought to be obvious that you cannot continue to amass debt beyond your ability to pay it off, but our leaders in Washington have not yet figured this out.


US Treasury data shows the national debt is $13.95 trillion, which has accumulated over many years of spending more than we took in.

We have a statutory debt ceiling of $14.29 trillion, raised to that level less than a year ago. Treasury Secretary Timothy Geithner informed Congress recently that sometime between March 31 and May 16 the federal government will have spent enough to breach that boundary, and that Congress must once again raise the debt ceiling.

The folks down at the Department for the Creation of Scary Scenarios – whose recent work includes the doomsday prognostications of global catastrophe if the country does not immediately replace fossil fuels with undeveloped technologies – has issued a dire warning that the debt ceiling must not be breached, or the world as we know it will end. This catastrophic scenario reached Austan Goolsbee, chairman of the U.S. Council of Economic Advisers, who then proclaimed that the impact on the economy would be “catastrophic.”

And if the debt ceiling is ultimately breached, the results would be very serious. But that isn’t forecast to happen until two to four months from now, and the intervening time can be used for more than hand-wringing and gnashing of teeth, or for a thoughtless overreaction to the scare tactics and hastily raising the debt limit.

The U.S. debt ceiling has been raised 11 times since 1996, and it’s time to stop. Starting now we must take steps to prevent having to raise the limit again, or at the very least to substantially delay raising it.

However, rather than limit spending, our government continues to dole out dollars to favored constituencies, and continues borrowing the money to do so. This has been occurring off and on for decades, and instead of doing the right thing, the sensible thing, the responsible thing – which is to control spending – our weak-willed, self-interested big spenders in Congress and the administration want to raise the ceiling yet again, and borrow more money.

And apparently Mr. Goolsbee also favors the free-spending status quo, saying on ABC’s “This Week,” “I don’t see why anybody’s playing chicken with the debt ceiling. If we get to the point where we damage the full faith and credit of the United States, that would be the first default in history caused purely by insanity.”

Speaking of insanity, let’s review a few of the loony things our government does. The Heritage Foundation has produced a long list of things that are improper, inefficient, and/or wasteful, including:

• There were 2.15 million federal employees in 2010 (including 80,000 temporary Census workers) costing taxpayers approximately $447 billion.
• Federal workers earn 30 to 40 percent more on average than their private sector counterparts.
• In 2009 their average wage/salary was $74,403, not including benefits.
• Federal employees owe more than $1 billion in income taxes they failed to pay.

The country is paying too many employees too much money to run dozens of duplicate and wasteful programs, and to operate the government inefficiently.

But despite these disgraceful examples of malfeasance by our public servants, many members of Congress still want to raise the debt ceiling.

Continuing this fiscal irresponsibility is not an option. We have to take tough, drastic action on federal spending now, and given the abundant opportunities listed above – nearly $200 billion specifically enumerated, and who knows how much more – finding ways to save billions isn’t difficult.

A US Senator spoke passionately on this issue just before a vote to raise the debt ceiling a few years ago: “The fact that we are here today to debate raising America’s debt limit is a sign of leadership failure. Leadership means that ‘the buck stops here.’ … America has a debt problem and a failure of leadership. Americans deserve better.” Those are the words of then-Senator Barack Obama (D-IL), and on this issue, he was right.

So, Congress, your instructions are: Lower spending and lower the debt by doing away with duplication, waste, fraud, and inefficiency, and get federal pay and benefits in line with the private sector. Start doing the job you were elected to do, and don’t punish any American with higher taxes until you first straighten things out. At that point, we won’t need higher taxes to balance the budget.