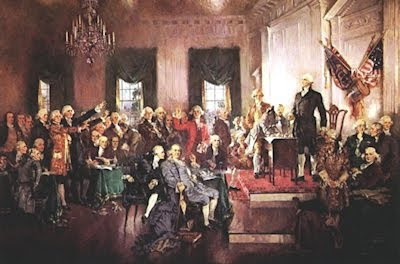 Things are terribly off course in the United States, and have been moving in the wrong direction for so long that many Americans not only don’t really realize it, they have come to believe this condition is normal and proper.

Here are two examples demonstrating how absurd things have become, both involving Nancy Pelosi (D-CA), the Speaker of the United States House of Representatives, although she is by no means the only one who warrants being cited.

Back during the uproar over the proposed health care reform bill, when opponents were complaining that the 2,700-page bill was too large to be read and understood before it was voted on, and that it contained features whose results were poorly researched, Ms. Pelosi told us that we “have to pass the bill so that you can find out what’s in it,” and did so with a smile on her face, without so much as a hint that she appreciated the absurdity of that comment.

A majority of Americans have expressed their opposition to the proposed Islamic center in New York, close enough to the Twin Towers that the building on the site where the mosque will be built was damaged badly enough to render it unfit for occupancy by wreckage from the planes hitting the World Trade Center. That is, in fact, the only reason that property was available for the mosque project in the first place.

The most valid of that opposition, of course, comes from the families and friends of the innocent people who were murdered in the attack, or whom we saw on TV jumping to their death to avoid being incinerated, and the police and fire fighters who died trying to save them. But there are others whose legitimate opposition to construction of the Cordoba House within the zone of 9-11 damage focuses on the fact that it is a painful reminder of the attack perpetrated by people worshiping the same god of Islam as the project’s proponents. Speaker Pelosi suggested that there ought to be an investigation to discover what sinister force is behind the opposition, and how “this [is] being ginned up.”

The founders of this once-great nation must be spinning in their graves as a high elected federal government servant seriously contends that the American people can’t know what’s in important legislation until it has been passed into law, and that bills before the Congress are routinely hundreds or thousands of pages long and often haven’t been read before being voted on, and that normal Americans expressing their thoughts about important events and issues would be the subject of a federal investigation for their actions.

We seem to have traveled through a wormhole into an alternate universe, where black is white and common sense has been stood on its head, along with our country’s founding principles. It is the stuff of a Mel Brooks movie, just as absurd as High Anxiety or Blazing Saddles, though not at all funny.

Those brave men and women who mutually pledged to each other their lives, their fortunes, and their sacred honor to fight for and win freedom from the oppressive rule of the British Crown and establish a small and limited government focused on individual liberty would be bewildered by the gargantuan, intrusive, inefficient and wasteful bureaucracy that has evolved over the 230-plus years since their brave sacrifice.

Could they ever have intended a government that would tell farmers how much wheat they can grow; dictate that every American must purchase a particular sort of health insurance, whether they want it or not; regulate how much water pressure your shower can use and what kind of light bulbs you can buy; and require average Americans to work more than 25 percent of the year – 99 days – just to pay their taxes?

Would they condone the federal government abandoning one of its major responsibilities – preventing the illegal entry into the country by millions of people, and protecting its citizens from those illegals that have violent and criminal intentions? Would they agree with taking a state to court, when in the face of federal incompetence that state attempts to protect itself and its legal residents from this onslaught of illegal aliens?

How would they react to government officials and other Americans branding citizens who rise up in constitutionally protected opposition to an out-of-control federal bureaucracy and to events with which they strongly disagree as “Nazis,” and “homophobes,” and “racists?” Indeed, was it not this same sense of protest at government oppression that brought on the American Revolution?

Whatever happened to Jefferson’s dictum, “that government is best that governs least?”

Someone once said that the country is never in greater danger than when Congress is in session, and when the House, the Senate and the White House are under the control of the same political party, that danger is magnified immensely.

The elected servants in Washington are grossly out of touch with the people they were sent there to serve. They are not listening to us, they are dictating to us, and it’s time for a change.