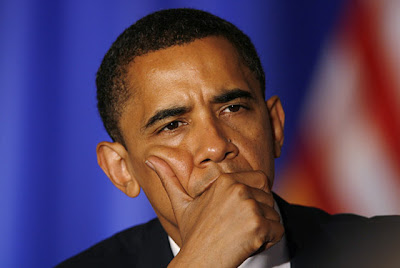 The Real Clear Politics average of seven polls taken from June 17 through July 8 shows that the president garnered 46.4 percent favorable and 47.9 unfavorable, for a -1.5 deficit in job approval. However, the two most recent polls show larger margins of disapproval.

A Gallop poll taken from July 6 through 8 shows only 45 percent approve of what Mr. Obama is doing, while 48 percent disapprove.

But a Rasmussen poll taken over the same three-day period shows a 7.0-point margin, with 46 percent approval and 53 percent disapproval.

Support for the Democrat’s health care reform plan has dropped to 42.3 in the RCP Average for the period May 19 through July 1, while 50.7 percent disapproved. And the new Rasmussen poll taken on July 1 shows Americans don’t like the plan by a 60 to 36 margin, a spread of -24 points.

By a two-to-one margin (62.3 vs. 30.2), Americans strongly disapprove of the direction the country is heading, as reflected by the RCP average from June 10 through June 27.