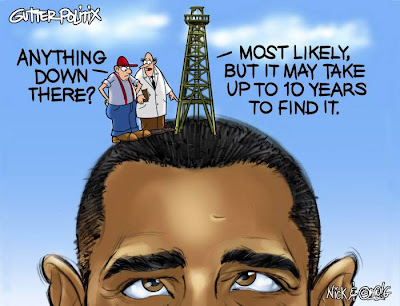 There seems to be no vision of the results of the Democrats’ fatally flawed energy policy horrible enough to dissuade them from continuing down the path that will wreck the current energy system.

Congress and the President are determined to put into effect policies and regulations that will have a substantial negative impact on our current means of producing the energy the American people and their economy require without fully considering the consequences of their actions. The six-month moratorium on drilling in the Gulf of Mexico stands as grim testimony to the damage caused by these ill-considered policies.

A study of the effects of moratorium in the Gulf, which ends in late November, shows it will cost more than 8,000 jobs in the Gulf states of Florida, Alabama, Mississippi, Louisiana and Texas; nearly $500 million in wages will be lost because of the ban; and $2.1 billion dollars in economic activity and approximately $100 million dollars in state and local tax revenues will be lost. Louisiana State University finance professor Joseph Mason’s study also shows that at a minimum 12,000 jobs may be lost nationwide, and that will cost the federal government around $200 million dollars in tax revenues.

Summing up the damage caused by the moratorium, John Young, chair of Jefferson Parish Council in Louisiana, has called the moratorium "a death blow to Louisiana."

“The moratorium was imposed without proper economic analysis and I think the administration will be shocked when they understand how many people this action has put out of work and how many thousands of small businesses are being jeopardized by this action," Sen. Landrieu said.

If these are the results of only six months of no drilling in the Gulf, how much worse will it be to extend the ban or to put crippling policies into effect?

A serious element of the bill is a requirement for an extremely high level of insurance coverage on projects on the Outer Continental Shelf, so large as to be unattainable, and insurers say that will force many American companies out of U.S. waters, costing thousands of jobs and millions in economic activity that the country cannot afford to lose. While large companies may be able to self-insure, they will see costs increase precipitously, and will likely look elsewhere to invest their money in drilling projects.

API estimates that continuing down this path will cost more than 175,000 jobs and billions of dollars in federal oil and natural gas revenues.

Mr. Gerard said, “Legislation that raises the cost of production to uneconomic levels; that renders deepwater oil and natural gas areas off limits to production; drives small- and mid-sized firms out of business; shuts down access to domestic energy resources; or singles out our industry for punitive tax increases—all of which have been part of various bills in the House and Senate—will have significant impacts on jobs and economic growth.”

When 53 percent of American voters pulled the lever for Barack Obama in November of 2008, do you suppose they understood that this is what he meant when he promised to “fundamentally transform the United States of America”?