Arizona forced to act by the
federal government’s willful negligence 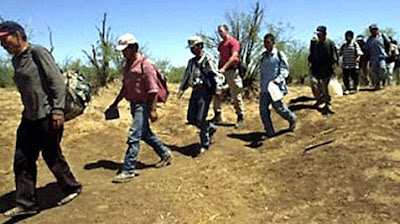 "Southern Arizona is a war zone controlled by outside criminal forces," said Patrick Bray of the Arizona Cattlemen's Association, and ranchers say the problem has been festering for years. They have been warning of the rising level of drug-cartel-related violence that has already claimed the lives of 10,000 people in Mexico since late 2006, and could further spill into the U.S. That assertion is supported by the murder of 58 year-old Robert Krentz on his Arizona ranch in March, and a deputy sheriff who was shot by a group of suspected illegal alien drug runners just recently.
Arizona is a main corridor for human and drug smuggling, and Phoenix now ranks second in the world in kidnappings for ransom, reporting 366 abductions in 2008, mostly tied to Mexican human smugglers and narcotics gangs.

In case you didn’t grasp that, here it is again: Phoenix – an American city – ranked second in the world for kidnappings for ransom by Mexicans two years ago. Folks, that is plainly not acceptable.

Arizonans are rightly concerned for their own safety and that of their families, friends and neighbors. They are justified in being angry at the gross negligence of the federal government on the border issue, and are so desperate for a solution to this intolerable situation that they took matters into their own hands and passed a law that enables state, county and municipal law enforcement officers to do what the feds refuse to do: check the status of people who as a result of lawful contact may be suspected of being illegally in the U.S. (and Arizona).

This measure has the support of fully 70 percent of Arizonans, including 51 percent of Democrats, 69 percent of independents and 80 percent of Republicans.

Incredibly, this necessary action has prompted a variety of hysterical responses from enablers of illegal aliens. Take the Ms. Foundation for Women, for example. The subject line of an email message screeched, “Arizona Governor Signs Racist, Anti-Immigrant Legislation,” and then goes on to say, “Last Friday, Arizona Governor Jan Brewer signed the horrific anti-immigrant bill SB 1070 into law, explicitly condoning racial profiling and the criminalization of undocumented immigrants. We're appalled.” What is appalling, ladies, is your factual inaccuracies.

Granted, being murdered or kidnapped isn’t nearly as serious as the possibility someone may have to produce a Green Card or other proof they are here legally when being questioned by police about a crime, but it ought to rate some concern among fellow Americans.

But no: A ridiculously large number of people are more concerned about the possible inconvenience to Hispanic-looking people than they are about actual violence against the citizens of Arizona. There are an estimated 460,000 illegal aliens in Arizona – one of every 15 residents – and some of them are most likely guilty of more than just being an illegal alien, like kidnapping or murder or drug trafficking. The wild-eyed and inaccurate statement by the Ms. Foundation for Women and the misinformed and emotional reaction to the new law by others who prefer protecting illegal aliens to protecting fellow Americans do nothing to improve the situation for Arizona’s residents, and that should be the primary concern for every American.

Those who have the word “racism” on the tip of their tongue ready to spit it out at every opportunity charge the law is deficient in three areas:

This view has broad support among the enablers of illegal aliens, however, the Center for Policy Analysis has compared the federal statute and the Arizona law and demonstrated that there is no material difference in the two, revealing those criticisms to be gross (and perhaps deliberate) distortions.

Some legal authorities say the law is unconstitutional because immigration, including illegal aliens, is a federal matter, and that means Arizona’s situation may prompt a federalism showdown. Karl Manheim of Loyola Law School in Los Angeles comments: “States have no power to pass immigration laws because it’s an attribute of foreign affairs. Just as states can’t have their own foreign policies or enter into treaties, they can’t have their own immigration laws either.”

However, if someone in Arizona is illegally in the United States he or she is de facto illegally in Arizona. Since the federal government is willfully negligent in securing the borders, it is sheer idiocy that a state could be prohibited from protecting its citizens from the criminal acts of illegal aliens, and particularly so if it deals with illegal aliens in the same manner as the federal government would were it doing its job. The Framers of our Constitution never intended that the states should be so restrained.

Homeland Security Secretary Janet Napolitano argues that the borders are more secure now than ever. That’s irrelevant, Madam Secretary. They aren’t secure enough, and you are partly responsible for securing them.

Meanwhile, opponents of Arizona’s efforts to protect its citizens urge people to boycott the state. Let’s hope that only illegal aliens follow that request.